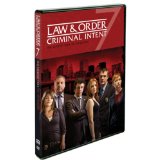 “In New York City’s war on crime, the worst criminal offenders are pursued by the detectives of the Major Case Squad. These are their stories.”

Dick Wolf used to pretty much own NBC and prime-time drama. His flagship series Law & Order lasted 20 years, tying the record held by Gunsmoke for the longest-running scripted drama. It was his wish to break the record, but by season 20 the franchise had lost some steam and was axed by NBC. It wasn’t a total loss for Wolf, who had two other Law & Order shows still running at the time. Law & Order: SVU has been the more successful, but Law & Order: Criminal Intent had a pretty good run, as well.

The series starred Vincent D’Onofrio as Detective Robert Goren. He was almost autistic in the way he solved cases. He was socially awkward and often stuttered when he tried to speak. But when he was on a case he was brilliant in his powers of deduction. His partner was Detective Eames, played by Kathryn Erbe. It was all she could do to keep up with Goren’s train of thought. She was loyal and always backed his play. They worked the Major Case Squad where they were given high-profile cases and those involving VIP or sensitive aspects. For the first four years each episode revolved around just this team.

In season 5 D’Onofrio was becoming a bit tired and was looking to maybe leave the series. A compromise was struck that allowed him to only appear in half of the shows. For the other half Dick Wolf brought back Chris Noth and his Detective Logan character from the original show. His partner was Detective Megan Wheeler, played by Julianne Nicholson. For part of season 7 he had a temporary partner in Detective Nola Falacci, played by Alicia Witt. The captain for both teams in season 7 was Captain Danny Ross, played by Eric Bogosian. He usually ended up having to deal with the politics and fallout from the work of his detectives, particularly Goren.

Unlike the other Law & Order shows, the private life of Goren played a huge part of the show. In season 7 he has just buried his mother and is returning from a bout of depression. The effects of that season 6 event would cause ripples throughout this season. He has to deal with his own fears of mental illness, which his mother had, when he performs an unauthorized undercover. His nephew is in a mental facility out of Goren’s jurisdiction and claims the guards are torturing and killing patients. He fakes an identity and gets himself committed only to endure the tortures himself. It leads to a long suspicion. His only way back is through another undercover he coerced by the brass into. This one nearly gets him killed. It’s a long and painful road for the detective, and it makes this a crucial season for fans. Fortunately, Shout Factory has taken over the release duties from the stalled Universal sets.

The series was also different in how the crimes were portrayed and solved. At the beginning of each episode you saw the crime happen. You saw how it was planned and executed. The drama was more in the solving. Usually, Law & Order built its shows on a constant formula where the detectives put in the street work and interviews. They then turned them over to the courts. In this series the show focuses more on Goren’s detective process, and there is usually no court segment. They more often ended with Goren tricking the suspect into confessing or at least slipping up. The Logan episodes do follow the usual Law & Order MO without the court segment.

The opening intro music has been adopted from the short-lived Law & Order: Trial By Jury series. It’s not a change for the better. It’s very abrasive, and fortunately, you can skip right past it. This is also Chris Noth’s final year on the series. The show lasted three more years, and now only the SVU version remains on the air. Dick Wolf learned well under the guidance of Steven Bochco he’s spread his shows abroad. There was a Law & Order: UK and a Law & Order: Criminal Intent Russia. As much as I like the show, I’m not sure about the Russia idea. “I’ll add this to the list of things I didn’t need to see.”

Gino Sassani is a member of the Southeastern Film Critic's Association (SEFCA). He is a film and television critic based in Tampa, Florida. He's also the Senior Editor here at Upcomingdiscs. Gino started reviewing films in the early 1990's as a segment of his local television show Focus. He's an award-winning recording artist for Omega Records. Gino is currently working on his 8th album Merchants & Mercenaries. Gino took over Upcomingdiscs Dec 1, 2008. He works out of a home theater he calls The Reel World. Favorite films: The Godfather, The Godfather Part II, The Body Snatcher (Val Lewton film with Karloff and Lugosi, not the pod people film), Unforgiven, Gladiator, The Lion King, Jaws, Son Of Frankenstein, The Good, The Bad And The Ugly, and Monsters, Inc.
Stone Temple Pilots – Alive In The Windy City (Blu-ray) Gene Simmons Family Jewels: Season 6