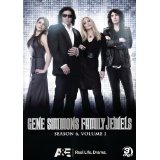 I’m not sure if it’s a case of morbid curiosity, but I ended up somewhat liking the show. At about 21 minutes an episode, it’s just the right length. Even if I did find this stuff entertaining, there was only so much of Gene’s family I could take in one sitting. The premise is simple and has been done to death by now. Cameras follow some famous person or family in the hopes of providing compelling drama for millions of viewers. OK, so that’s a bit of an exaggeration, but so is the idea that we’re going to get an intimate inside look at these folks while the cameras are rolling. It’s a lot like wrestling. If you don’t buy into that what you’re seeing is actually real, you can get a few laughs out of the whole thing. I will also admit this show destroyed a lot of the Gene Simmons mystique for me. Let’s face it. Can you ever watch the stage persona in the same light again after watching Gene scoop kitty litter or wash his dog by throwing him in the pool? Let’s not even talk about an attempt to get semen from a bull. Still, Gene turns out to be an interesting character very much removed from the one we’re so used to seeing. While Gene dominates the show, there is plenty of time given to wife Shannon Tweed, from Playboy and soft-porn films.

This season was pretty hard for me to get through. The show usually has a bit of variety, and I do enjoy watching Gene’s business genius at work. But this season is all about the relationship problems between Gene and Shannon. She walks out on him twice and is suddenly fed up with his womanizing life-style and unwillingness to get married.

First of all, I find it a bit disingenuous for her to get this emotional this quickly. It’s not like she didn’t know. While I think it’s great that they work out these family problems, it never really rings true. In one scene I caught some staging as Shannon confronts Gene about a receipt she finds in his pants. He went to the movies instead of his promised therapy. The paper she carries changes considerably in size. It’s not the same paper each time. The scenes were obviously staged. It also appears that his therapist never changes clothes for weeks at a time. Look, I know this is entertainment, but this thing drags on too long and leads to a lavish wedding. Good for them. I’m just not sure I want to watch it.

The season is released in two volumes. I look forward to a season when the show can return to the normal quirks and variety. There was some of that here. A trip to Israel where Gene met his family for the first time does ring true and is a welcome break from the relationship issues. That stuff appears rather self-indulgent. I guess Gene’s right when he says, “That’s why it’s good to be me”.

Gino Sassani is a member of the Southeastern Film Critic's Association (SEFCA). He is a film and television critic based in Tampa, Florida. He's also the Senior Editor here at Upcomingdiscs. Gino started reviewing films in the early 1990's as a segment of his local television show Focus. He's an award-winning recording artist for Omega Records. Gino is currently working on his 8th album Merchants & Mercenaries. Gino took over Upcomingdiscs Dec 1, 2008. He works out of a home theater he calls The Reel World. Favorite films: The Godfather, The Godfather Part II, The Body Snatcher (Val Lewton film with Karloff and Lugosi, not the pod people film), Unforgiven, Gladiator, The Lion King, Jaws, Son Of Frankenstein, The Good, The Bad And The Ugly, and Monsters, Inc.
Law & Order: Criminal Intent: Year Seven Butterfly Swords