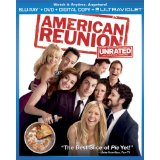 Right before this movie hit theaters, I made a snarky joke about how I was already mentally preparing myself for American Funeral in about 20 years. (I imagined the gang reluctantly reuniting following the death of a 50-year-old Steve Stifler in a tragic, orgy-related accident involving high school girls…except it turns out Stifler faked his death to get the crew back together and shenanigans ensue.) It was an easy joke to make because I felt American Reunion came with a detectable whiff of desperation. Cast members who were missing from 2003’s American Wedding were suddenly available now that they weren’t quite as busy as they were nine years ago. Instead, I’m happy to say that the fourth film in the franchise — I’m willfully ignoring the straight-to-DVD American Pie Presents… titles — is mostly a love letter to fans and a pretty decent raunchy comedy on its own merits.

The film even acknowledges the odd timing for this particular reunion. I’m not even sure 13-year high school reunions are a real thing (it’s not exactly a nice, round number), but that’s what brings the American Pie gang back to East Great Falls, Michigan. We spend the first portion of the movie catching up with the characters’ lives in their early 30’s. Jim and Michelle (Jason Biggs and Alyson Hannigan) are still married, but in the kind of sexual rut that all married couples with children seem to suffer in movies and on TV. The amusing opening scene reminds us that there is no end to Jim’s humiliation and the rest of the film confirms that Jason Biggs’ penis is still a reliable source of comedy.

Oz (Chris Klein) is a sports talk show host, but better known for his stint on a celebrity dancing show that bears a striking resemble to Dancing with the Stars. Kevin (Thomas Ian Nicholas) is a work-at-home husband addicted to trashy TV, Finch (Eddie Kaye Thomas) seems to be living the life of The Most Interesting Man in the World, and Stifler (Seann William Scott) is still a functioning sociopath, but scrapes by as a temp these days. Once the boys return home, they deal with both former loves — including Heather (Mena Suvari) and Vicky (Tara Reid) — and new temptations.

As you can see, this movie has a lot of characters to juggle. On the plus side, that means co-writers/co-directors Jon Hurwitz and Hayden Schlossberg (the Harold and Kumar trilogy), along with co-executive producers Biggs and Scott, managed to snag everyone from the original film, even if they only pop in for brief cameos. (Their reach even extended to minor characters like “MILF Guy #2”, played by a hilarious John Cho.) The downside is that none of the separate story lines for the original characters fully take off on their own. Even Jim and Michelle’s central conflict is cliched and thin, especially since we have a pretty good feeling that they’re going to work things out in the end.

As if that weren’t enough, the movie also jams in a surprisingly high amount of new characters. Though Jay Harrington has some good moments as Heather’s new proto-douche boyfriend, and Katrina Bowden was clearly put on Earth to look great in a bikini as Oz’s frisky new love interest, the only newbie who really stood out was Ali Cobrin as Kara, the girl Jim used to babysit and who is now about to turn 18. I’ll just say that if Cobrin doesn’t sweep this year’s Anatomy Awards, then the system is broken.

Besides the opening scene, American Reunion is at its best during set pieces that thrust the group together. This includes the sequence where the guys try to sneak drunk Kara back into her house, and (nostalgia alert!) a party at Stifler’s house and a school dance that each harkened back to the original film. Most importantly, it became clear to me that the main reason the cast got back together is because they really enjoy playing these characters and relish each other’s company. (Scott, in particular, smuggles in a twinge of sadness when someone points out how desperate Stifler is to recapture his high school years. Biggs is still as adept at physical comedy as he was 13 years ago.)  On top of that, someone finally had the bright idea to put Eugene Levy (Jim’s Dad) and Jennifer Coolidge (Stifler’s Mom) in some scenes together for the benefit of us Christopher Guest fans out here!

I own all three previous American Pie movies and I was virtually the same age as these characters when the first movie came out in 1999. American Reunion may not pack the same punch today that the original film did at turn of the century, but it was still fun catching up with old friends.

American Reunion is presented in its original aspect ratio of 1.85:1. The 1080p image is arrived at with an AVC MPEG-4 codec at an average of 20 mbps. The black levels are consistently problematic, making night time scenes and some interior shots distractingly bad to watch. The sharpness is also not where I’d expect it to be for a brand new release from a major studio. On the plus side, colors pop quite well during outdoor scenes, which also boasts nice contrast. Most importantly, all of the various nude body parts — this movie has something for everyone — come through very clearly.

As is the case with most comedies, the DTS-HD Master Audio 5.1 track is primarily here to deliver the jokes. The dialogue comes through extremely well, as do all the pop/rock-oriented songs on the soundtrack. (Including the “classic rock” tune “Wannabe” by the Spice Girls.) I was, however, disappointed by the lack of immersion and ambient noise given the amount of outdoor scenes. (Only a brief conversation near a waterfall stands out.) On the other hand, the sound effect from Stifler pooping into a cooler came through my speakers brilliantly.

(Blu-ray exclusives)
The “Out of Control” Track: Activate this feature and you’ll have Biggs, Scott and the rest of the cast occasionally pop up during the movie with annoying sound effects to make juvenile jokes and not offer very much insight. Though the actors are having a good time, this is totally skippable. (Biggs and Scott are particularly irritating when they’re together.)

The Best of Biggs: Hangin’ with Jason B.: (3:37) This love fest for the actor/producer focuses on his kind nature, goofiness and the fact that he’s a chronic farter. That’s news you can use.

Lake Bake: (4:31) Behind the scenes featurette of the lake sequence, with an emphasis on the cast and crew dealing with the brutal Georgia heat.

Dancing with the Oz: (2:50) Klein trained for months for what turned out to be about a one-minute gag in the movie. Choreographer Stephen Jones gives Klein props for his work on the film, which turned out to be surprisingly decent.

American Reunion Yearbook: As a longtime Pie fan, this is probably my favorite part of the bonus material. This cool interactive feature allows you to click on each of the characters and see their profiles. From there you can select categories like “Most Embarrassing Moment” or “Activities” to access clips from the three previous movies. (Not sure how they settled on just one embarrassing moment for Jim.) You can also choose the “Where Are They Now” section to access a brief clip of each actor talking about what their character is up to in the present day.

American Gonad-iators: The Fight Scene: (4:13) Covers the conception and choreographing of the comedic fight between the main characters and a group of high schoolers.

(Features available on the Blu-ray and DVD)
Deleted Scenes: (7:51) Includes seven scenes highlighted by a little more Natasha Lyonne (as tough-talking outcast Jessica) and a cranky Stifler prepping for his party. Features a Play All option.

Gag Reel: (3:42) Pretty standard bloopers. A little heavy on Seann William Scott, and even Chad Ochocinco manages to get off a decent joke.

Ouch! My Balls!: (1:47)  An exploration into the intricate dynamics of the Crawley family. Oh crap! I got this mixed up with my Downton Abbey notes. Yeah, this is just footage of the guys in the cast punching each other in the balls.

The Reunion Reunion: Re-Launching the Series: (10:32) This doc features footage from the first Reunion table read/photo shoot and documents the search for the perfect lid to cover Jason Biggs’ penis. Overall, a pretty entertaining special feature that reinforced the cheesy-but-true idea that this was a high school reunion for the cast as well.

Feature Commentary with co-directors/co-writers Jon Hurwitz & Hayden Schlossberg: Hurwitz and Schlossberg constantly describe themselves as major fans of the original film, and they prove it here. This entertaining and engaging track has them pointing out all the callbacks to American Pie, no matter how subtle (a musical cue) or obvious (Hannigan resurrecting her “This one time, at band camp…” line). They also talk about various re-writes (Michelle was pregnant at one point) and discuss a wide variety of production details. The duo clearly gave these characters a lot more thought than you’d probably guess. (Kevin got a beard because his character is kind of a blank slate, so they could mess around with his appearance. They also talk about trying to make Stifler a bit more sympathetic.)

Unlike the original American Pie, this film won’t be spawning a handful of new stars. (Except maybe Cobrin.) Still, the movie delivers a good amount of laughs and is satisfying for fans of the franchise. (At least the one writing this review.)

The Blu-ray is far from an audio/visual marvel, and the negligible “Unrated” version of the film is less than one minute longer than the theatrical cut. However, the disc brings a treasure trove of bonus material — some of it disposable, most of it worthwhile — and reveals that a surprising amount of care and effort went into staging this reunion.

Mannix: The Seventh Season The Collapsed