The Essential Games of the Chicago Cubs 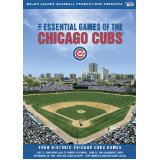 Any compilation of the greatest moments in Chicago Cubs history has the potential to come off as a cruel joke. After all, we’re talking about a franchise that hasn’t been to the World Series since 1945. On top of that, Roosevelt was in office the last time they won it all…Teddy Roosevelt in 1908! As a result, The Essential Games of the Chicago Cubs obviously doesn’t feature any moments from the Fall Classic.

Fortunately, the Cubs happen to be one of the most storied franchises in Major League Baseball history. They also play their home games in one of the world’s most famous ballparks.

So it’s appropriate that each of the four games in this A&E DVD release took place at Wrigley Field. The collection features some of the best and most electrifying players in franchise history, as well as a few of the team’s most triumphant moments from the past 30 years.

Fret not, Cubs fans: this is a Bartman-free zone.

Hall of Fame Showcase: Cubs vs. Philadelphia Phillies – July 12, 1969
As the title suggests, this contest was more noteworthy for the collection of talent on display than for being a particularly memorable game. (A 7-4 win for the Cubs.) On this day, Chicago boasted four Hall of Famers — Ernie Banks, Billy Williams, Ron Santo and starting pitcher Fergie Jenkins — and were led by Cooperstown-bound manager Leo Durocher. The Cubs had started the year 11-1 and occupied first place in the newly-formed National League East until a September swoon — involving a black cat at Shea Stadium — made them one of the most celebrated second place teams in MLB history.

However, Banks — the most popular Chicago Cub of all time — was 38, which made him the oldest non-pitcher in the major leagues and well past his prime. This black-and-white broadcast was most noteworthy for how much more swiftly baseball games moved back then, as well as a couple of things you’re a lot less likely to see or hear during a game in 2012. Not only was Phillies starting pitcher Rick Wise rocking a pair of dorky eyeglasses on the mound, but this game marked his first start since June 18 “due to military duty.” (Imagine a player today of any sort of stature missing games for that reason.)

Sandberg’s Comeback Shocker: Cubs vs. St. Louis Cardinals – June 23, 1984
This is easily the best game of the bunch (and one of the best games of all time), a wild 12-11 win for the Cubs. Not only does it stand on its own as a classic contest and a coming-out party for second baseman Ryne Sandberg — 5 for 6, 7 RBI on his way to snagging the 1984 NL MVP, the first Cub to do so since Banks in 1958-59— but Chicago went on to make its first postseason appearance since 1945. Besides taking place during the regular season, this game had every single ingredient you’d want out of a classic.

Chicago was facing off against its longtime rival, the St. Louis Cardinals. Speaking of the Cardinals, star outfielder Willie McGee hit for the cycle and had 6 RBI, while Hall of Fame shortstop Ozzie Smith saved a couple of runs in the first and another in the bottom of the ninth with his unbelievable glove. As the Saturday “Game of the Week”, this one had a nationwide audience (and a young Bob Costas doing play-by-play). Sandberg tied the game in the bottom of the 9th AND the bottom of the 10th with home runs off Hall of Fame reliever Bruce Sutter — who went on to set a then-Major League record with 45 saves that year — before Chicago won it in the 11th.

Most improbably of all, this game featured a pseudo-Bartman 19 years before Steve Bartman helped ruin the Cubs’ best chance of returning to the World Series! In the top of the 10th, Smith hit a pop up to almost the exact same spot where Bartman interfered with Moises Alou, except this time a fan interfered with left fielder Gary Matthews. You can guess what happened next: Smith got on base and scored the go-ahead run. (Fortunately for that fan, Sandberg bailed the team out in the bottom of the inning.)

This one is just a beauty in every way. A quick dorky eyeglasses update before we move on: Cardinals catcher Darrell Porter could be seen wearing a pair underneath his mask(!)

NL Wild Card Tiebreaker: Cubs vs. San Francisco Giants – September 28, 1998
This year, MLB introduced an extra wild card spot in each league that keeps a lot more teams in contention for the postseason (a good thing), but makes games like these a lot less likely (a bummer). The Cubs and the Giants finished the regular season with identical 89-73 records, so they faced off in a one-game playoff at Wrigley.

Although the electricity from the crowd was palpable from the first inning (when Cubs starter Steve Trachself struck out Barry Bonds), the game itself comes up just short of being great. Trachself pitched 6 1/3 innings of no-hit ball, but was such a notoriously slow worker that it killed some of the enthusiasm and momentum. Other than that, the highlights include seeing a 40-year-old Gary “The Rat” Gaetti break a scoreless tie with a two-run homer in the fifth, worrying that Giants manager Dusty Baker was going to swallow the toothpick he kept playing around with, seeing Barry Bonds with a regular-sized head, and seeing NL MVP Sammy Sosa at the height of his powers and before everyone realized he was probably on steroids. (1998 was the year Sosa and Mark McGwire “saved” baseball with their thrilling home run race.)

NL Central Division Clincher: Cubs vs. St. Louis Cardinals – September 20, 2008
Another game that’s included more for its historical significance and less because it was a particularly great contest. On this afternoon, the Cubs beat the Cardinals (there’s that team again) to secure their second straight postseason berth since…exactly 100 years earlier when they won the World Series!

Chicago prevailed 5-4 over St. Louis — thanks in large part to a bases-clearing hit by Rafael Soriano in the second inning — but both teams were done scoring by the sixth inning and well before Cubs pitcher Kerry Wood came in to nail down the win in the ninth. Chicago (led by manager Lou Piniella) finished the regular season as the best team in the National League, but the optimism and euphoria in the air on this day wound up being bittersweet: the Cubs were swept by Manny Ramirez and the Los Angeles Dodgers in the National League Division Series.

This is also the only game in the collection that gives you the option of listening to the announcers on the Cubs Radio Network. I know he worked for WGN, but I would’ve loved to have seen/heard legendary broadcaster Harry Caray in one of these games other than the tribute from the 1998 team. (Caray died in February 1998, and the Cubs wore a patch with his likeness on their uniforms.)

As I said before, the only contest in this collection I’d consider a standalone classic is “The Sandberg Game.” I would’ve found a way to include Wood’s 20-K game against the Astros at Wrigley: besides the whopping number of strikeouts, he only gave up one hit and had zero walks in only his fifth career start!

Unfortunately, this no-frills package doesn’t give anyone other than miserable, present-day Cubs fans looking to relive past glories a whole lot of incentive to pick it up. (No special features and only one local radio broadcast out of four games, plus the audio/visual quality is nothing to write home about.) The Essential Games of the Chicago Cubs provides an adequate snapshot of the franchise’s notable successes in the past decades. Too bad those successes are too few and too far between for long-suffering fans of the team.

Winx Club: The Secret of the Lost Kingdom Movie Playing For Keeps Trailer