Posted in: Disc Reviews by Gino Sassani on August 21st, 2012 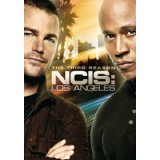 The show differs in several ways from NCIS or JAG. While LA is still a military show, that angle is downplayed here. The atmosphere for the team is more civilian-looking all the way around. There are seldom folks walking around in uniforms. The operations utilize more of the standard surveillance and undercover work. In the back-door pilot, the leader of the group was an agent who had history with Gibbs. Her name was Macy, and she was played by CSI alum Louise Lombard, who was gone when the series premiered in its own right. Later we are told she was killed. There’s a lot more street work to be found here. That means car chases and lots of shootouts. The cases often deal with terrorists, so these guys break a lot of the rules. They don’t let any silly Constitution stand in their way.

The role of head honcho went to Linda Hunt as Hetty. You might remember her as one of the prominent judges from The Practice. She plays a character with a rich back story. She appears to have once been a Hollywood costume designer and has plenty of stories about the big celebrities she knew, and hints at sleeping with. She’s a strong mother hen for the group, both nurturing and demanding. The lead undercover officer is Callen, played by former Batman sidekick Robin, Chris O’Donnell. He doesn’t know his first name, only that it starts with a G. He’s a little Jason Bourne. He knows little of his own past but has those mad instincts and ability to think on his feet. He was orphaned and has some security issues. He moves a lot, never staying in one home more than three months. He’s a natural undercover with great instincts that allow him to blend into any situation. His partner is Sam Hanna, played by rapper LL Cool J. He’s a former Navy Seal with the brains to go with all of that bulk. The team also includes Kensi Bly, played by Daniela Ruah, who was born in the US but spent most of her acting career on Portuguese television shows. She’s the prerequisite supermodel that it seems every cop show has to have. Fortunately, she also has solid acting chops. The character is the CSI-styled forensic expert on the team. She’s the one who combs the crime scenes for those hidden clues. In season 2 her former partner Nate Getz, played by Peter Cambor, leaves the show. He is replaced by LAPD liaison Marty Deeks, played by Eric Christian Olsen. The two have better chemistry than Kensi had with Nate. There’s the expected sexual tension and a lot of banter that keeps the partnership interesting. Eric Beal, played by Barrett Foa, is the tech guy of the group. He does all of that computer hacking that every show does these days. He also has a partner, of sorts. Nell Jones is played by Renee Felice Smith. She’s a bright young rising star who has a lot of the same tech knowledge that Eric has.

The new season is the most dramatic to date. It picks up exactly where we left things at the end of season 2. Hetty has left for Romania where she hopes to protect Callen from the family that has had a blood feud with his own for generations. Of course, the team follows her, resigning their positions to do so. In Romania Callen discovers quite a few big answers to his own mysterious past. Listen during the end credits of an episode this season and you’ll hear Hetty reveal his real first name.

The season also introduces a new character to the fold. Miguel Ferrer joins the cast as new Deputy Director Owen Granger. He appears to have somewhat of a hidden agenda, and it’s clear that he and Hetty have a complicated past. Another highlight of the season has the return of Nate, played by Peter Cambor, for an episode.

If there is a theme to the season, it is family. Of course, it all begins with the best look we’ve had yet into Callen’s family, but it doesn’t stop there. Kensi will also confront the mysteries of her own father’s death in a story arc that will reveal the real reasons for Granger’s appearance. Deeks may not have to deal with family in the traditional sense, but he does have to confront his past in the LAPD when he returns and is involved in the complicated hunt for a bad cop. For Sam the family issues surface when he must investigate a Navy Seal team for the murder of one of their own. Eric and Nell don’t really deal with family, but they do become a solid partnership in this season.

Each episode of NCIS: LA is presented in its original broadcast 1.78:1 aspect ratio. While there is at times a bit of grain, the presentation is mostly pretty solid. There are some sweet ocean scenes that appear to shine in color and depth. There are a lot of earth tones here, so don’t look for a particularly bright mood in the presentation.

The Dolby Digital 5.1 offers a few nice ambient moments, but mostly you’re getting dialog here. It’s all fine and well placed; just don’t look for too much ear candy.

There are a couple of cast and crew Audio Commentary tracks on select episodes.

Raise The Roof: (9:09) The feature focuses on the new sets: a gym, shooting range and armory.

Dishing With Barrett And Renee: (17:24) The two actors talk over a table of wine and cheese.

Allighning The Stars: (14:11) Meet Osama Shufani. No, he’s not the latest terrorist on the watch list. He’s a retired member of the United States Marines who serves as the technical advisor for the show. As he describes himself, he’s the “good” Osama.

Carmageddon: (11:59) Check out how they do those cool car explosions.

Pa Make Loa: This is the crossover episode from Hawaii Five-O.

Investigating Season 3: (28:16) Cast and crew talk about the season. Each of the main actors describes the arc of their character for the season.

Surf And Turf: (7:17) Cast and crew of both shows talk about the crossover.

As you might expect, the season does end with another huge cliffhanger. Like they really needed another reason to keep us coming back for more. It’s a good time to get caught up before the new season starts and your new questions are answered. We’re only a few weeks from the start of season 4 and more new episodes. I say, “Let them come”.

Gino Sassani is a member of the Southeastern Film Critic's Association (SEFCA). He is a film and television critic based in Tampa, Florida. He's also the Senior Editor here at Upcomingdiscs. Gino started reviewing films in the early 1990's as a segment of his local television show Focus. He's an award-winning recording artist for Omega Records. Gino is currently working on his 8th album Merchants & Mercenaries. Gino took over Upcomingdiscs Dec 1, 2008. He works out of a home theater he calls The Reel World. Favorite films: The Godfather, The Godfather Part II, The Body Snatcher (Val Lewton film with Karloff and Lugosi, not the pod people film), Unforgiven, Gladiator, The Lion King, Jaws, Son Of Frankenstein, The Good, The Bad And The Ugly, and Monsters, Inc.
Revenge: The Complete First Season The Dictator – Banned & Unrated Version (Blu-ray)