Posted in: Disc Reviews by Gino Sassani on August 27th, 2012 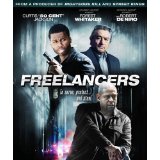 When you see a cast that includes names like Robert DeNiro and Forest Whitaker, you have justifiable high expectations for a solid experience. Add 50 Cent to the mix and past experience will tell you that not even a teaming of Robert DeNiro and Al Pacino can save the picture. The rapper-turned-actor has certainly found himself cast with enough Academy Award power that the transition should have been more successful than it has been. The fact is that 50 Cent hasn’t appeared to have learned anything from rubbing elbows with so many Oscar statues. Freelancers is another example of a bad actor bringing down considerably better talent to a less than mediocre range.

Malo (50 Cent) is a street kid who has had a few scrapes with the law growing up. He’s a child of the streets, but he and two of his street friends managed to clean up their lives enough to enter the police academy. Now he’s graduated and following in his dead father’s footsteps. He’s immediately taken under the wing of his father’s old partner Captain Joseph Sarcone (DeNiro). Suddenly he skips directly to plainclothes and introduced to his “birthright”, a world of elite corrupt cops led by Sarcone.

Malo willingly enters this world of corruption until two things begin to change his life. He discovers that his father might have turned on Sarcone and consequently been killed by his new patron. Malo also gets greedy and begins to see himself as the new top dog and begins to lay out a plot of revenge and avarice.

50 Cent sleepwalks through his performance. He’s going through the motions with no real outward emotions or motivation. The real crime here isn’t any of the police corruption portrayed in the predictable script. It’s the way 50 Cent brings actors like DeNiro and Whitaker down to his own level. DeNiro is far from the dynamic presence we can usually rely on here. He’s not trying at all. It’s the closest thing I’ve seen to the man merely cashing a paycheck. Sure, he delivers the usual classic DeNiro smirks and comes across more like a bad cop Yoda grinning through one-liners about loyalty and betrayal. Whitaker is barely better. If ever there was an actor who could deliver a good/evil duality in a character it’s usually him. There are moments in this film where he forgets how bad the acting around him really is and he shows the smallest spark of an inspired performance. These moments always come when 50 Cent is not on the screen.

One of the film’s acting highlights is the flashback scenes of Malo’s father when he was a young boy. The father is played by The Wire’s Andre Rolo, always a pleasure to see. Fortunately for Rolo, he didn’t have any scenes with 50 Cent. Dana Delany delivers a subdued performance as the wife of a killed DA and Malo’s patron at the academy. Annabelle Acosta and Beau Garrett both have some good moments as the women in Malo’s life, but both threads are underdeveloped and left rather ambiguous throughout.

Director Jessy Terrero is no feature film director. He’s had a long relationship directing 50 Cent in music videos, and I’ll bet he doesn’t really get to tell 50 Cent what to do. Unfortunately, one gets the impression that no one from the cast to the crew feel like they can offer any criticism to the rapper and decide to phone in their jobs instead. The result is a lackluster effort that muddles through its run time with one cliché after another involving undeveloped characters in a plot that runs like molasses in February.

Freelancers is presented in its original aspect ratio of 2.40:1. The 1080p image is arrived at with an AVC MPEG-4 codec at an average 35-40 mbps. The high-definition image does what it needs to do here. The colors are soft and washed out to solidify a dirty street quality. Textures make up for this intentional image style by allowing you to feel the grit of these streets. The film isn’t razor sharp and looks a bit more documentary style, but it fits the intent here just right. Black levels are above average.

The DTS-HD Master Audio 5.1 is faithful to the sub-heavy rap music. There’s plenty of bounce here. Dialog cuts through just fine, and the little bit of traditional score is a bit understated.

Deleted Scenes: (18:35) There are 11 with a play-all option. They include an alternate opening that plays out what later is flashback.

Behind The Scenes: (14:30) These are merely interview clips with too many clips from the film to pad the running time.

Extended Interviews: (33:20) Every sound bite from the previous feature can be found here, plus more footage. There are no clips here, so watch this and skip the Behind The Scenes.

50 Cent might well be a great rapper, I don’t really know. That doesn’t make him a great actor. We’ve seen this too many times before. A rock star or athlete tries to turn their celebrity into an acting career. 50 Cent has had it better than most in opportunity. He’s gotten to work with some of the best in the business. Unfortunately, he’s not learning anything, and I don’t see a desire to learn anything. So far, none of his efforts have taken the box office by storm. This one was given only a small limited release before it ended up on video. He destroyed Righteous Kill. Remember his other notable films: All Things Fall Apart, Set Up, or Gun? Me neither. “There’s no such thing as coincidence, right?”

Gino Sassani is a member of the Southeastern Film Critic's Association (SEFCA). He is a film and television critic based in Tampa, Florida. He's also the Senior Editor here at Upcomingdiscs. Gino started reviewing films in the early 1990's as a segment of his local television show Focus. He's an award-winning recording artist for Omega Records. Gino is currently working on his 8th album Merchants & Mercenaries. Gino took over Upcomingdiscs Dec 1, 2008. He works out of a home theater he calls The Reel World. Favorite films: The Godfather, The Godfather Part II, The Body Snatcher (Val Lewton film with Karloff and Lugosi, not the pod people film), Unforgiven, Gladiator, The Lion King, Jaws, Son Of Frankenstein, The Good, The Bad And The Ugly, and Monsters, Inc.
Jersey Shore – Season Five Uncensored Revenge: Interview With Emily VanCamp