Posted in: Disc Reviews by Gino Sassani on September 27th, 2012 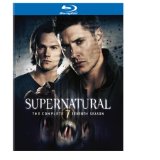 “Now this is going to be so much fun.”

They’ve just saved the world, yet again. If you watch Supernatural, you know I’m talking about the Winchester brothers Sam and Dean. You also know by now that saving the world is never the end of the story. Each time they put themselves out there to stop the big evil from putting a major hurt on planet Earth, it comes at a cost, and this season is no exception.

If you are a fan of the original Kolchak: The Night Stalker, you were more than likely disappointed in the remake a couple of years ago on ABC. Your hope is now once again restored. Supernatural is the closest thing I’ve ever seen to The Night Stalker. Like Kolchak, the Winchester brothers are faced with weekly incarnations of evil. They’re forced to research these legends and figure out a way to stop them. As Kolchak discovered, it’s a thankless job. Sure, Supernatural is populated with all sorts of beasties and nasties, but it also manages to hold on to a sense of humor that rounds out these adventures to make this one of the most entertaining shows around.

What amazes me most about Supernatural is the incredible balance the show manages to keep up week after week. Of course, there is that creature-of-the-week idea, but without taking anything away from each episode, there is an overall story arc that ties these creatures and moments together in such an intricate yet easy-to-follow fashion. Each episode blends just the right mix of darkness, comedy, and series mythology. Even The X-Files wasn’t able to spin so flawless a tapestry. I also can’t say enough about the leads. Jared Padalecki and Jensen Ackles have a wonderfully complicated chemistry that gives us an element even Kolchak never had. This is not a one-trick-pony relationship. Under all of the brotherly love and shared tragedy there are far more emotional themes that surface from week to week. There are resentments and rivalries that can suddenly dominate their intercourse. Unlike most shows these conflicts are real and remain a part of the fabric of this relationship, not to be brought out and then quickly overcome never to be seen again. Each of these events leaves a visible mark on their personalities. This kind of continuity is almost unheard of. It requires discipline and dedication by everyone involved; from the actors, writers, and production staff. And again, the season finale will leave you counting the hours until the next episode.

The season begins literally minutes after the last one ended. The boys have won out again, but Castiel has taken on all of the souls of Purgatory, and it’s made him a very powerful being. Power corrupts, and Castiel announces himself as our new God. And that’s just how it all starts.

The real story in season 7 is a group of those souls. When Castiel finally releases them, it comes at a cost for him and the world. He forgets who he is and spends much of the season in a coma or MIA. That’s too bad because I’ve grown to really like Misha Collins a lot. Rest assured he’ll have a presence throughout the season. The real consequence is this year’s “big bad”. They’re called Leviathans, and they’re some of the oldest beings in creation. They organize to make Earth their own paradise. That means a steady supply of food, and we’re their favorite lunch.

The best part of the season is watching the brothers return to normal hunting as they figure out a way to stop the Leviathans. I missed the “creature of the week” format, and it is a welcome return to the show’s roots. There are some rather interesting cases. The boys get in the middle of an 800 year domestic squabble in an episode that reunites Spike and Cordelia from the Buffy days. James Marsters and Charisma Carpenter join as the feuding couple with great powers in Shut Up, Dr. Phil.  The show pokes fun at its 7-year run in Season Seven, Time For A Wedding. Sam and Dean take their annual pilgrimage to Vegas. Sam ends up marrying Becky. You might remember her from the earlier episode that has a writer recounting the Winchester adventures in a series of books called Supernatural. Becky has her sights set on Sam, and the two are suddenly married. Talk about your odd domestic situation. One of the better episodes has the Leviathans putting out Sam and Dean clones who perform horrible crimes on camera to frame the boys. You can’t beat the episode where Sam goes back to 1944 and works with Eliot Ness on a demon hunt.

Of course, there is loss. Bobby Jim Beaver will leave the show as Bobby. He ends up finally getting killed and the show runners give him an incredible episode to say goodbye. But, this is Supernatural, and goodbye is never for certain. Bobby will find a way to help the boys from beyond the grave. Don’t expect it to last, however, and I don’t think we’ll be seeing him in season 8. He’s another fan favorite character and will be missed.

With all of this going on, the show never lets you forget there’s a big bad out there with intentions of turning Earth into one big meat processing plant, and we’re the meat. James Patrick Stuart stars as Dick Roman. He’s the leader of the Leviathans and was once a motivational speaker before he was taken over. He runs a huge company with plenty of assets to build his meat processing plant. Stuart is a good villain, but I will tell you that the “Dick” jokes get real old really fast. It all leads to another season-finale confrontation and consequences that will set up next season. Let’s just say the show still has it. You could say it’s on fire this season.

Supernatural’s audio is finally presented in DTS-HD Master Audio track. The show just comes alive so much better in the uncompressed audio. Subs finally make themselves heard, and the rest of the show retains the quality we’ve had in previous releases.

Jensen Sings Outtake: (2:04) Dean is singing along to Air Supply in this amusing outtake.

Scoring Washboards & Tommy Guns: (25:12) I already mentioned the sweet episode that finds Dean back in 1944 working with Eliot Ness. The show’s two composers usually split the season, but they worked together on this episode to bring the sound of the era to life for the episode.

Directing Supernatural: (19:42) This is a very good feature. Seven of the show’s directors talk about their experiences working on the show. It’s a nice intimate piece with lots of inside information. Film study fans will find it just filled with educational tidbits.

Supernatural’s Creature Drive-In: This is really an odd feature. It’s awkward and time-consuming to navigate the CG drive-in. There you get what the booklet calls short films that pay tribute to 50’s horror. Not so. It’s behind-the-scenes pieces done up with a film style. It’s way too much trouble for the usual stuff. I just don’t want to work this hard to see features. There are times when it takes nearly half a minute for a transition to finish before your 5-minute selection plays.

Some shows just can’t help it. After years of being in production they keep hitting on all the right elements. Of course, it all boils down to the wonderful job of the leads. This is a show with no standing sets or standard situation. It changes from year to year. Hell, it changes from episode to episode. I don’t see it slowing down anytime soon. “See you next season.”

Gino Sassani is a member of the Southeastern Film Critic's Association (SEFCA). He is a film and television critic based in Tampa, Florida. He's also the Senior Editor here at Upcomingdiscs. Gino started reviewing films in the early 1990's as a segment of his local television show Focus. He's an award-winning recording artist for Omega Records. Gino is currently working on his 8th album Merchants & Mercenaries. Gino took over Upcomingdiscs Dec 1, 2008. He works out of a home theater he calls The Reel World. Favorite films: The Godfather, The Godfather Part II, The Body Snatcher (Val Lewton film with Karloff and Lugosi, not the pod people film), Unforgiven, Gladiator, The Lion King, Jaws, Son Of Frankenstein, The Good, The Bad And The Ugly, and Monsters, Inc.
Strippers Vs. Werewolves (Blu-ray) Looper