House at the End of the Street (Blu-ray) 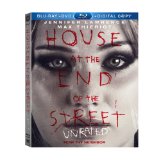 If it were possible to buy stock in any under-25 actress today, I’d pick Jennifer Lawrence first, Emma Stone would be a close second, and Kristen Stewart would be last. Lawrence has a pair of blockbuster movie franchises in her back pocket (The Hunger Games, X-Men) and is already a two-time Oscar nominee, thanks to her recent nod for Silver Linings Playbook. So if a studio were to have a Jennifer Lawrence film on its bench, September 2012 would probably look like some prime real estate.

Prime real estate and a murder-related discount are what attract Elissa (Lawrence) and her mom (Elisabeth Shue) to their new home in House at the End of the Street. Elissa becomes drawn to reclusive next door neighbor Ryan (Max Thieriot). Four years earlier, Ryan’s parents were murdered by his sister, who promptly disappeared. (That explains how Elissa and her mom got such a good price on their rental.) Ryan now lives in the house by himself, but a series of strange occurrences make it clear Ryan’s house hasn’t seen its last dead body.

That’s not to say director Mark Tonderai doesn’t have fun with certain horror conventions. As you can tell by now, I think Jennifer Lawrence is a fabulous actress, but even she’s not good enough to prevent Elissa from stepping outside her house to investigate a suspicious noise or from approaching a dead body that may not actually be dead. Tonderai and his team — David Loucka (Dream House…hmm, I’m sensing a pattern) is credited with the screenplay — also display some Psycho-tic tendencies with their story and a few visual cues.

Lawrence puts a mature, sarcastic spin on the stock Surly Teenager character. She and Shue make for a fine mother-daughter duo. Elissa’s relationship with her mom — who conveniently works nights at a hospital, so Elissa is often alone at night — is strained. We don’t get all the information right away, but Lawrence and Shue play their scenes well enough that we get the picture. (Of course, the movie goes ahead and gives us the information anyway.)

Thieriot has the film’s trickiest role. Initially, his Ryan comes off as both sweet and shell-shocked. As we learn more about Ryan and his family’s history, however, I didn’t really see Thieriot’s performance evolve. Gill Bellows (Ally McBeal) also pops in as a friendly cop and the one person in town who isn’t creeped out by Ryan.

For a little while, it seemed like the scariest people in the movie would be the jerky neighbors who desperately want Ryan to move out because he and his spooky house are lowering the value of their property. Thankfully, the film has some twists and turns along the way that you may be able to figure out depending on how many thrillers you’ve seen.

House At The End Of The Street  is presented in its original aspect ratio of 2.35:1. The 1080p image is arrived at with an AVC MPEG-4 codec at an average 25-30 mbps. The film opts for a very realistic feel for most of the movie. The high-definition image presentation boasts solid black levels which are quite important as the film works toward its climax. A few exteriors are a bit bright and washed out, but flesh tones and interior colors are all pretty natural. The film doesn’t boast a lot of texture, however, and is too glossy at times.

The DTS-HD Master Audio 5.1 is also pretty naturalistic. This is not an overly aggressive mix in the surround channels. Dialog dominates, and the score is often a bit too high in the mix. The jump scenes offer the expected punch in the sub range, but overall the film stays very much in the mid-ranges.

Journey Into Terror: (9:59) HD Typical making-of feature that focuses on the cast and their characters.

House at the End of Street isn’t terribly original (nor terribly scary), but it makes for an okay late-night viewing option. I’d say it’s a step above a solid straight-to-DVD title; the major difference is this one gets a wide theatrical release because it happens to star one of Hollywood’s hottest young actresses.