Posted in: Disc Reviews by Jonathan Foster on January 17th, 2013 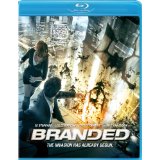 Do you realize how much you’re affected by advertising? Branded attempts to answer this question while showing us where our world is headed if the trend continues. Mishka Galkin (Ed Stoppard, The Pianist) is Russia’s advertising whiz kid. When Mishka meets Abby (Leelee Sobieski, 88 Minutes, The Wicker Man), they immediately become friends, despite the fact that she is the niece of Bob Gibbons (Jeffrey Tambor, TVs Arrested Development, the Hellboy movies), Mishka’s boss. Even though Bob warns him to stay away from Abby, Mishka enters into a personal and professional relationship with her, developing an Extreme Makeover-type show in Russia together. Unfortunately, the show tanks when the woman getting the makeover falls into a coma following her cosmetic surgery.

In the public outcry that follows, Mishka is jailed and Abby is deported. When he gets out after being incarcerated for a few days, Mishka angrily confronts his boss, claiming that Bob used his former CIA contacts to orchestrate the show’s failure so that Abby would leave Russia (and Mishka). During this argument, Bob has a heart attack and dies. Believing his marketing ability is “a curse” harming those around him, Mishka decides to leave the advertising business behind and become a hermit. (The idea that Mishka’s ability is a curse comes from the film’s narrator, who sounds like GLaDOS, the evil computer from Portal.)

This is where the movie gets weird. Without revealing spoilers, Mishka comes to find out how corporations are manipulating the population. The rest of the film covers Mishka’s battle with these evil corporations.

Branded is the complete opposite of what any trailer — or even the Blu-ray box — would have you believe. It looks like a futuristic monster/alien movie, but it’s really more of an indictment of society; closer to the kind of tripe Michael Moore comes up with. Every part of the film is affected by the inane plot, especially the actors. Ed Stoppard seems to always have a pained expression on his face, like he can’t bear to say hoary lines like, “They’re hijacking our desires!” The rest of the cast seems to be phoning it in, with even Jeffrey Tambor giving a subdued performance. (Although Bob’s death scene is hilariously bad.)

Much like Cloverfield, I see (and mostly understand) what writers/directors Jamie Bradshaw & Aleksandr Dulerayn were trying to do. The execution falls way short.

Branded is presented in an aspect ratio of 2.40:1. The 1080p image is achieved with an AVC MPEG-4 codec at an average of 18 mbps. The film looks pretty good, with the exception of the corporate “monsters” Mishka sees. They look garish and extremely cartoony, like something from Foster’s Home for Imaginary Friends. I realize it’s CGI, but it’s like they didn’t even try to make it work. There are also several scene transitions where it fades to black and stays that way, giving the impression that the video hasn’t caught up to the audio yet. The one thing I liked was Mishka’s flashbacks. They’re presented in muted colors with pops and scratches — like a 1940s newsreel — giving a neat contrast between then and now.

The DTS-HD Master Audio 5.1 track serves the dialogue well. Every word (even if it’s Russian) is very clear and audible. The same can’t be said for the score and sound effects. There are parts where the same sound will rise and fall, going from really loud to inaudible for no reason. It’s unbalanced and really breaks your attention from the film.

Commentary with writers/directors Jamie Bradshaw & Aleksandr Dulerayn: Bradshaw and Dulerayn spend most of the time doing one of three things: congratulating themselves, fawning over Leelee Sobieski and Max von Sydow’s cameo, or talking about their experiences in Russia after the fall of the U.S.S.R. Not much is said about the actual movie.

Not since Mystery Science Theater 3000 have I seen such a bad movie. I wish Tom Servo, Crow T. Robot, and the rest of the MST3K gang were around to make this movie more enjoyable. Run away fast from this movie and go see The Greatest Movie Ever Sold instead. Same message, much better movie.