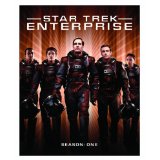 35 years to be exact. Enterprise is the fourth spinoff from the original 1960’s hopeful series. The Earth is finally ready to send its first starship to explore the vast galaxy. This first starship Enterprise is smaller than the ships we’ve become used to. There are no shields or photon torpedoes. The transporter has only been cleared for inanimate objects. Not that this stands in the way of its occasional “emergency” use. The ship is very much like the cramped spaces of today’s submarines. It adds an even greater sense of reality to the show. The crew is composed of Captain Jonathan Archer (Bakula), First Officer and Vulcan High Command liaison, T’Pol (Blalock), Chief Engineer Charles (Trip) Tucker (Trinneer), Tactical Officer Malcolm Reed (Keating), Denobulan Dr. Phlox (Billingsly), Pilot Travis Mayweather (Montgomery) and Linguist/Communications Officer Hoshi Sato (Park).

With no Prime Directive to stand in their way (did it ever stop anyone before?) this crew has carte blanche to discover the wonders of the cosmos. Most of this season finds the crew battling new enemy the Suliban. (Can anyone say Taliban?) A Temporal Cold War is also introduced that places the crew in the middle of factions from the future.

There are some very compelling episodes in the show’s first season. The pilot, Broken Bow, starts off with a bang. When a Klingon ship crashes in an Oklahoma corn field, he is shot by the farmer who encounters him. It’s the perfect excuse for Archer and his crew to get their voyage started and begin to interact with other species. Of course, the Vulcans don’t think we have what it takes, and that’s how we end up with a Vulcan on the ship.

Episodes like Shuttlepod One demonstrate the return to episodes that play out as character studies. Remember the show that started it all had effects only slightly better than campy Lost In Space, another show salvaged by great characters. I am drawn by the idea of tension between humans, who have a genetic desire to explore, and the Vulcans, who do not consider humans ready for the intergalactic community. No doubt that Enterprise had incredible potential. I believe the show was just getting its space legs when UPN pulled the plug. Who needs thought-provoking social commentary when you can air Who Wants To Be America’s Next Super-Model?

Each episode is presented in its original aspect ratio of 1.78:1. The 1080p image is arrived at with an AVC MPEG-4 codec. This was the first Star Trek series to be filmed in both HD and widescreen. Most areas broadcast the series in that way so this will look very much like you remembered it, only better. The computer generated ships and planets are the most impressive here. You really get a sense of what the original show could have looked like if it had been done today. Solid black levels really sell the deep inky blackness of space, while superior contrast really brings out star fields and other objects in space. There’s a texture to this show very different from the glossy world of previous shows that makes it all stand out. This was the way the show should have looked for all of you who didn’t have HD broadcasts ten years ago.

All of the features from the DVD sets are included in this 5-disc collection. There are also select deleted scenes and commentary tracks.

In Conversation – Rick Berman and Brannon Braga: (1:02:59) The two show creators gather for a look back on the series. It’s just the two of them talking. There’s is new information to be found here, and it’s worth a look. Berman’s a bit bitter about the criticism he’s gotten over the years. Still, this is a quality extra all the way.

To Boldly Go: This is a three part new HD feature that begins with the concept and takes you through casting and production on the first season. Each segment is about a half hour, and there is no play-all option. Pretty much all of the cast and crew are involved, and the best stuff comes from some rather candid conversations with the cast. It’s open-ended and intended to be built upon during future Blu-ray sets.

There’s no doubt that this one was a natural to get the Blu-ray treatment. Paramount didn’t have to do a lot of expensive tweaks, and the best part is that it fills in those long gaps between Next Generation releases. I know the show isn’t as popular as some of the others, but in spite of my Berman complaints, there was plenty of good stuff here that deserves another look. “I’ve got faith”.

Gino Sassani is a member of the Southeastern Film Critic's Association (SEFCA). He is a film and television critic based in Tampa, Florida. He's also the Senior Editor here at Upcomingdiscs. Gino started reviewing films in the early 1990's as a segment of his local television show Focus. He's an award-winning recording artist for Omega Records. Gino is currently working on his 8th album Merchants & Mercenaries. Gino took over Upcomingdiscs Dec 1, 2008. He works out of a home theater he calls The Reel World. Favorite films: The Godfather, The Godfather Part II, The Body Snatcher (Val Lewton film with Karloff and Lugosi, not the pod people film), Unforgiven, Gladiator, The Lion King, Jaws, Son Of Frankenstein, The Good, The Bad And The Ugly, and Monsters, Inc.
Carol Burnett Show: This Time Together Lincoln (Blu-ray)