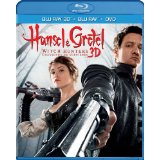 Hansel and Gretel, everyone has heard of this fairy tale, right? The Brothers Grimm tale about a brother and sister lost in the woods who come across a house made of candy. They go inside and are soon captured by a witch who goes about stuffing them with candy to fatten them up to be slaughtered. Somehow the cunning pair manages to escape their shackles, and while the witch is distracted with the oven, they push her into the oven and destroy her. We have all heard the tale, but what happened afterwards?  Did they go back home, or did they live out their days in the witch’s house? Clearly I’m not the only one to wonder what happen to this pair of siblings, and now thanks to Jeremy Renner, Gemma Arterton, and the folks at the Paramount and MGM, we have our answer.

Fast forward many years later (as the film doesn’t give a specific number of years that have gone by), Hansel and Gretel have grown up to become famous and equally dangerous witch hunters. When the town of Augsburg is plagued by witches who have been abducting the town’s children; the incompetent Sheriff Berringer (Peter Stormare, Prison Break) and a mob of townspeople are in the process of condemning a local woman to be burned at the stake without any evidence of guilt. The mayor in an attempt to calm the panic of the townspeople has brought in Hansel (Jeremy Renner, The Avengers) and Gretel (Gemma Arterton, Prince of Persia).

The brother and sister pair is extremely close, yet share different views when it comes to witch hunting. Hansel is of the kill-them-all mentality, blindly diving head first into any situation which lands him square on his butt from time to time. Gretel has a more analytical view, needing more evidence of a person’s guilt than her brother. However, that hasn’t softened her demeanor, normally choosing to solve her conflicts with a head butt.

Not long after beginning their investigation into the missing children, the pair learns that they are up against a witch unlike any one they have ever faced, the grand dark witch Muriel (Famke Janssen, Taken 2). Arming themselves with some killer weaponry, the brother and sister face off with Muriel, discovering a link to their own past that dates back as far as the encounter that made them what they are.

Well, let me start off by saying this is a farce film done right.  A film like this is supposed to be fun and entertaining, not watered down with an overcomplicated plot and subplot. What’s the title? Hansel and Gretel: Witch Hunters; and that is exactly what you see in the movie.

I really enjoyed how the movie got right to the point. After the opening credits, it got right to the action with no lollygagging, which is refreshing to see in a movie nowadays. The film also wouldn’t have been much without with the gore. I can’t believe at one point in time they were entertaining the idea of making it PG13; good thing common sense won out that time. The film does have a slight Zombieland feel with its cursing and gore, but given the commercial success of that film, I don’t see that as a bad thing.

Hansel And Gretel: Witch Hunters is presented in its original aspect ratio of 1.85:1. The 3D image has a sweet duel MVC codec at an average 35/15 mbps. This is one solid 3D presentation. The depth of field is rich and immersive. The production design combines with the excellent use of 3D to create a convincing and engaging image. The standard 1080p image is arrived at with an AVC MPEG-4 codec at an average 30-35 mbps. Both versions of the film offer comic-book-style colors and atmosphere. Sharp images provide a glossy texture. The gore isn’t horror, but rather comic/fantastical gore. Black levels are excellent. The world here is quite stylized, but it never sacrifices the finer points of a superb high-definition image presentation.

The DTS-HD Master Audio 5.1 another fine example of an immersive experience. The score adds to the experience by delivering a strong whimsical yet often dramatic series of beats to the film. Dialog is always clear and concise. The surrounds are often quite aggressive providing plenty of ear candy and subtle atmospheric pieces. The sub comes alive throughout the film. The booming voice of Edward drives a surprising amount of room-shaking low frequency, as does the various explosions and chases.

Reinventing Hansel & Gretel: (15:41) Some good behind the scenes footage can be found here. Cast and crew talk about developing the story from the standard Grimm tale.

The Witching Hour: (9:01) This one focuses on the witch mythology for the film and how they went about creating the various witch designs. You get concept art and makeup footage.

Meet Edward The Troll: (5:25) I was surprised to learn that Edward was mostly a guy in a suit puppeteer by various off-screen animators. This is a very nice peek at how it was all done. I thought he was pretty much CG.

Extended Cut: There is a 10 minute longer unrated version, but it is not available in 3D.

The acting was good across the board for the most part, my one performance issue being with Peter Stormare, who I believe was terribly underutilized in this film. Renner and Arterton were great, though their different accents made belief in them being siblings slightly difficult, their performances actually helped establish a sibling bond that overrides their different voices. Janssen did all right as well, although with her hair-down look I couldn’t help but envision her as the Dark Phoenix rather than a witch.

Portions of the review were written by Gino Sassani

Jeremy Butler is a film school graduate of the International Academy of Design and Technology. He is been writing for Upcomingdiscs since 2012; however, movies have played a big part of his life for much longer. Favorite genres include horror, science fiction/fantasy, and comedy. Favorite movies are V for Vendetta, Boondocks Saints, Kiss Kiss Bang Bang, and The Godfather.
The Newsroom: The Complete First Season (Blu-ray) This Is the End