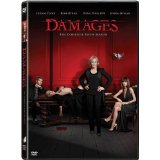 “You want to end this once and for all? Now’s your f—ing chance.”

And with those words, spoken during the closing minutes of the fifth and final season premiere of Damages, Patty Hewes sets the stage for her ultimate showdown with protégé/frenemy/surrogate daughter Ellen Parsons. (As you can see, Patty also takes advantage of the fact that the show — which began its life on FX — migrated to DirecTV for its final two seasons, allowing her to drop that F-bomb.)

Damages has always been about the cost of success. Patty Hewes (Glenn Close) is the ruthless, crusading attorney who has achieved enormous success by any means necessary and at great personal cost. She has basically taken a flamethrower to every personal relationship in her life, including the one she had with Ellen Persons (Rose Byrne), the ambitious young lawyer Patty alternately wanted to groom as a successor and destroy. Meanwhile, the cost of critical acclaim for this deviously dense legal drama — which features enough flashbacks and flashforwards to make a Lost fan’s head spin — was low ratings and cancellation following a magnificent season 3 finale that could’ve also functioned as a series finale. (“Is it worth it?”) Thankfully, the show’s fervent fans spoke loudly enough to prompt producers to strike a deal with DirecTV for a fourth and fifth season. (Unlike the deal DirecTV struck with Friday Night Lights, these episodes never aired on a broadcast or basic cable network; so producers had even more creative freedom.)

Indeed, the final season works well enough as a continuation of the events from season 4. So characters like Chris Sanchez (Chris Messina), the traumatized soldier and former high school flame of Ellen’s, and Bill Herndon (Judd Hirsch), Patty’s boozy old mentor, pop up again. Season 5 also picks up the storyline that pitted Patty versus her son Michael (Zachary Booth) in a bitter custody battle, with Ellen functioning as a character witness against Patty. The season’s major ripped-from-the-headlines case — following the footsteps of the Enron-like shenanigans of season 1 and the Bernie Madoff-esque figure at the center of season 3 — is Julian Assange doppelganger Channing McClaren (Ryan Phillippe). McClaren runs the WikiLeaks-like McClarenTruth.org, a supposedly anonymous safe haven for whistleblowers. However, when a whistleblower’s personal information goes public, it results in a wrongful death suit against McClaren. Patty leads the charge against McClaren, while Ellen — looking to make a name for herself after starting her own firm — takes him on as a client.

Still, the most rewarding part about the final season of Damages for longtime viewers — and if you’re watching Damages in season 5, there’s an excellent chance you’ve been watching it from the beginning — is the way it dovetails with events from the very first episode. (There’s also a steady parade of bit players from the entire first season.) One of the show’s signature moves each year is flashing forward to some sort of calamity at the beginning of the season before revealing how we got there in the finale. In season 5, we get a direct callback to the pilot with the camera focusing on elevator doors. But instead of a blood-stained Ellen Parsons frantically running onto the street, this time we get Patty Hewes stoically being led away in handcuffs. Why is Patty being arrested, and how did that lifeless body end up in the middle of the street? As always, things aren’t what they seem and you probably won’t be able to guess what really happened until the finale.

Most people seem to agree the new millennium brought about a new golden age of television, particularly when it comes to daring, cinematic drama series. If Damages doesn’t belong at the very top with shows like The Wire, The Sopranos, Breaking Bad and Mad Men, I’d argue it’s worthy of a spot on the very next tier. For starters, I can’t quite think of any other show before Damages that has given us a complex relationship/rivalry like the one between Patty and Ellen. Usually, when two women face off — even if they’re smart and powerful women — it’s because one slept with the other’s husband or a bunch of soapy antics ensue. Female characters don’t usually benefit from the straight-up dramatic treatment creators Glenn Kessler, Todd A. Kessler and Daniel Zelman give the ultra-competitive Patty/Ellen dynamic.

Today, it’s completely en vogue for movie actors to flex their dramatic muscles on the small screen. There were also movie stars who starred in TV shows before Close accepted the challenge of playing Patty Hewes in 2007. (And even before her powerful one-season turn on year 4 of The Shield in 2005.) But none of them were five-time Oscar-nominated powerhouses like Close, who picked up a sixth career nomination during the show’s run just for good measure. The actress also earned two Emmys and a couple of other nominations for her chilling, towering work as Patty Hewes. Close is so good that when Patty tries to convince Ellen in this season’s seventh episode/“The Storm’s Moving In” that she didn’t try to have Ellen killed at the end of the first season (and that the confession Ellen forcefully coaxed out of her in season 2 was invalid), I almost believed her despite the fact that the audience knows Patty is guilty. Byrne, inevitably, comes off as a bit of a lightweight, by comparison. (To be fair, she also doesn’t get as many showcase moments as Close does.) However, both the character and the actor have grown tremendously since the first season, and Byrne has succeeded in making Ellen into a worthy adversary for Patty. (I loved watching Patty and Ellen steal the upper hand from each other in the McClaren case during this season’s second and third episodes.)

Phillippe is the only other series regular this year besides Close and Byrne. The actor — who broke out after playing the arrogant, entitled Sebastian in Cruel Intentions — is a superficially good match for the arrogant, entitled McClaren. The character winds up being a more interesting figure than he appears at first glance. Jenna Elfman continues the show’s winning streak of successfully incorporating actors who are best known for their comedic chops. (The list includes Ted Danson, Martin Short, John Goodman, and more.) Elfman’s Naomi Walling, who uncovers wrongdoing at the investment bank where she works, looks and acts more like “Greg” than “Dharma.” The guest cast also includes Janet McTeer (Close’s Oscar-nominated Albert Nobbs co-star) as a lawyer with ties to Patty’s past, Victor Garber (Alias) as the CEO of the investment bank; and John Hannah (Spartacus: Blood and Sand) in a terrific turn as Rutger Simon, McClaren’s right-hand man who becomes a more prominent player in the second half of the season.

The final season includes as many delicious double/triple/quintuple-crosses as ever. That being said, I enjoyed the remarkable first half of the season more than the second half, which felt a bit rushed. FX gave Damages 13 episodes per year, while the DirecTV seasons were only 10; and it feels a bit like the writers never fully adjusted to the reduced episode order. So subplots like Patty’s potential bid for the U.S. Supreme Court are brought up, but don’t go anywhere. The resolution of both the McClaren case and the season-opening flashforward felt too sloppy. Fortunately, the final chapter of the Patty/Ellen saga was nicely underplayed and, again, shouted out to previous finales.

Damages: The Final Season DVD set includes all 10 episodes on three discs. There are also outtakes on Disc 1 (since this is such a serious show, it’s a kick to see the actors crack up) and 31 deleted scenes across all three discs. I also have to give credit where credit is due. I said some harsh things about previous releases from Sony Pictures Home Entertainment because of the way they stacked the discs directly on top of one another. So, in turn, I want to take a few words to thank them for improving the packaging and making each disc a lot more accessible.

Season 5 of Damages isn’t my favorite — that distinction goes to season 1, followed closely by season 3 — but it’s still absolutely worth a watch and it serves as a powerful conclusion for the show as a whole. During its run, Damages succeeded as a legal thriller, character drama, social/political commentary, a whodunit and even a pitch black comedy. The fact that the final two seasons played out somewhat off the TV grid shouldn’t stop you from experiencing some seriously compelling television now that it’s all available for home video consumption.  Though it achieved a fair level of acclaim, this show isn’t often mentioned alongside the great groundbreaking dramas of the new millennium. However, like many of its contemporaries, Damages was unlike any other show we’ve seen on television. As one character wryly pointed out this season, “the new wave is always laughed at. And then it takes over.”