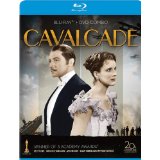 All Best Picture winners are not created equal. Some of them achieve cinematic immortality, while others are viewed as outright travesties. Then there’s the group of Oscar winners who have arguably suffered a fate worse than the derision and mockery of movie fanatics: the forgotten Best Picture winners. Cavalcade — described in this Blu-ray’s commentary as “not a particularly well-remembered Academy Award winner” — certainly falls in that category.

“This is the story of a home and a family; history seen through the eyes of a wife and mother whose love tempers both fortune and disaster.”

Cavalcade kicks off at the literal eve of the 20th century. We first meet the upper-class Marryott family in London on New Year’s Eve 1899. The family consists of patriarch Robert Marryot (Clive Brook) and his devoted wife Jane (Oscar nominee Diana Wynyard), along with their two children Edward and Joey. We also meet their service staff, which includes jovial butler Alfred Bridges (Herbert Mundin) and weary maid/Alfred’s wife Ellen (Una O’Connor), which gives the film an Upstairs, Downstairs vibe nearly 40 years before that landmark series debuted on British television.

At the start of the film, Robert and Alfred are about to leave home to fight in the British Empire’s Boer War in South Africa. The story follows the Marryots and the Bridges — along with their growing children — as they endure early 20th century landmarks like the death of Queen Victoria, the sinking of the Titanic, World War I and the Jazz Age. The film wraps up on New Year’s Eve 1933, which is the same year Cavalcade was released. (Meanwhile, the action in the Noel Coward play that served as the film’s basis concluded in 1929.)

To be perfectly honest, I’d never seen — or even heard of — Cavalcade until I sat down to review this 80th Anniversary Blu-ray release from Fox Studio Classics. What I found was a production that is both stuffy and staid, but also impressively prescient. (Jane Marryot is constantly bemoaning the swift and jarring changes that came with the 1900s; if only she’d known what the rest of the century had in store.) The Blu-ray case brags about how Cavalcade featured 150 speaking parts, 15,000 minor characters, 25,000 costumes, and a scene that required 2,500 actors. (Cavalcade also picked up Oscars for Best Art Direction and for Director Frank Lloyd.) Despite that mass of humanity on display — which is mostly employed during a handful of secondary crowd scenes — the film is more effective during some of its more intimate moments.

It’s a good thing too, because Cavalcade eschews staging any meaningful WWI battles — the closest we get is an extended death montage with a bunch of fallen soldiers — or the sinking of the Titanic in exchange for showing us the effects war and other calamities have on the people back home. Unfortunately, the movie’s straightforward, episodic presentation doesn’t fully allow the audience to connect with any character besides Jane and dampens the material’s sneaky sense of humor. (Listening to a couple make declarations of everlasting love while they’re aboard the Titanic, for example, is comically cruel.)

Jane functions as the center of the movie, and Wynyard’s performance develops as gracefully as Lady Marryot. Jane/Wynyard begins the movie by hitting a bunch of melodramatic notes — early on, I actually preferred O’Connor’s no-nonsense work as Ellen — but her acting becomes more palatable as it gets subtler. (Brook also makes for a capable, underused screen partner.) Wynyard ends up capably carrying the story, even if Jane just barely survives it. By the end, she proposes a bittersweet toast to all the good times and bad times. Given all the hardship and misery on display, I’m assuming all these alleged “good times” must be on some unseen Director’s Cut.

Cavalcade is presented in its original full screen aspect ratio of 1.33:1. The 1080p image is arrived at with an AVC MPEG-4 codec at an average of 38 mbps. Fox has done some truly impressive work with recent Blu-ray releases of both contemporary films and restored “classics”, so my expectations were high going in. That probably explains why I was a bit underwhelmed by this presentation. I can deal with the specks and the vertical hairline scratch that appears right down the middle of the image early on (and pops up a few more times in different parts of the screen). I can also understand the wide shots — particularly during musical/theatrical performances — and even some medium shots looking noticeably blurry. (This is an 80-year-old movie we’re talking about, after all.) However, it’s the inconsistent contrast and black levels that result in this not being as vibrant as other recent B&W restorations. If nothing else, it would’ve given us a clearer look at that Oscar-winning Art Direction.

The DTS-HD Master Audio 1.0 track actually packs a surprising wallop for a mono track. Obviously, the large-scale crowd scenes and the WWI death montage would’ve been even more potent with a modern track, but this one gets the job done well enough. Dialogue comes through adequately, though you might find yourself flipping on the subtitles a few times. (They’re available in English, Spanish and French.) Some scenes also feature a low, consistent hiss that underlines the action, though it’s not bad enough to be truly intrusive.

Commentary by film historian/critic Richard Schickel: Schickel got my attention within the first 30 seconds of this track when he called Cavalcade’s Best Picture win “unlikely.” He refers to the film as a “mighty production”, but he’s also not afraid to gently heckle it. (Like when he pointed out the medieval riders that appear in the transitional sequences have absolutely nothing to do with the story.) This track is dryly entertaining and informative, as Schickel also puts the film in its proper historical perspective. (The Boer War for the U.K. was like the Vietnam War for the U.S.; director Frank Lloyd was able to get all those extras because people were desperate for work during the Great Depression.) This is a must-listen.

On the other hand, being one of the worst Best Picture winners doesn’t necessarily mean it’s a bad movie. (Just like being the 12th man on an NBA squad doesn’t mean you’re bad at basketball.) The Blu-ray shows the film’s age, and I suspect Cavalcade will mostly interest Oscar completists who want to be able to say they’ve seen every Best Picture winner. Those viewers will find a dated, well-made film. Non-movie nerds should probably pass on this one.