Posted in: Disc Reviews by Gino Sassani on October 1st, 2013 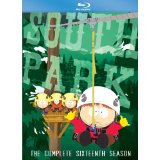 “Toilet time is the last bastion of American freedom.”

In this case it’s toilet humor. I often have trouble believing that South Park has been around for as long as it has. It’s not just the passing of 16 years, but the sheer brilliance in the face of an increasingly politically correct society. It’s like watching old episodes of All In The Family. Who believes that Archie Bunker would have any chance of survival in the 21st century? It’s no wonder that Norman Lear has become involved in the series. It’s the last remaining vestige of a once great freedom to be ridiculous and offend. Eric Cartman’s a lot worse than Archie ever was. We always knew that, in his heart, Archie had a soul. Cartman’s a psychopath without a conscience, and in a civilized society we would be terrified of the existence of such a demon spawn…except he’s just so dang funny. Trey Parker and Matt Stone have been walking a tightrope for over 16 years now, and it just doesn’t get old. One of the reasons the show doesn’t grow stale is their ability to make such a quick turnaround on current events. Because the show takes literally days to write and produce, they are quite often always the first to address an issue. They had an election-night episode on literally the next day in last season. That means the ideas stay as fresh as the headlines.

I’ve been a fan of South Park ever since a friend introduced me to the internet Christmas card that started it all. It was Santa versus Jesus, and these short potty-mouthed kids that somehow wormed their way under your skin. Pretty soon I was downloading the episodes and watching them on my computer. For some reason I can’t quite explain, I’ve very rarely watched an episode on Comedy Central. By the time things were getting tighter and riskier downloading the shorts, the single disc, 4-episode DVDs began to arrive in stores. So my South Park viewing moved from the PC to the DVD player. In a short time season sets began to arrive, and I looked forward to them with much anticipation, still watching it infrequently on television. After all, who needs the commercials and those silly network bugs that distract you on the screen? The series itself evolved in that time. The show was once achieved through a stop-motion process using construction paper cutouts. The animation was crude. After the Christmas card, the characters were significantly redesigned. They had a very evil look on that short. The first couple of episodes brought us an evolution toward the characters we know and love today. After a while the animation went to a computer process. The look remained the same, but gone were the paper cuts and stop-motion photography. As the show progressed there were less and less bleeps. It’s not that the language got any tamer. Standards got a little looser. Finally the bleeps would disappear from at least the DVD/Blu-ray releases.

You have to credit the expanding universe of good characters. The core group of Cartman, Stan, Kyle, and Kenny were great for a lot of years. But we also have such great semi-regulars as Timmy, Jimmy, and Token. These characters allow the stories to expand in ways the core group could not.

So what about the episodes themselves? Let’s play a little game called: The Good The Bad, and The Ugly, shall we?

Cash For Gold: Cartman is surprised at the money in the cash-for-gold business. He decides to open his own shop. He pays next to nothing for family heirlooms and passes them off on his home shopping show for tons of cash. He gets the idea when Stan’s grandfather becomes an addicted victim to the jewelry shows on television. The show does a clever montage as it presents the gold circle of life. Kids in India make the jewelry for next to nothing. They sell it to the home shopping shows. Old folks buy them for their kids and grandkids who sell them for cash at the gold for cash stores. The stores melt down the gold and remove the jewels and sell them back to the plants in India where the kids make new cheap jewelry. Pretty good stuff.

I Should Never Have Gone Zip-Lining: This episode is unique and follows the format of Animal Planet’s I Shouldn’t Be Alive. The boys go zip-lining only to end up in a boring tour group. Meanwhile Cartman’s impending stomach disaster is the cause of the show’s impending doom graphic illustrations. They even got the show’s narrator Eric Meyers to narrate the episode. It’s all quite classic South Park except for some live action “re-enactments” of the boys that really don’t live up to the expectations.

Insecurity: When Kyle’s parents engage in a little role-playing to spice up their love life, it leads him to think that the UPS man is sleeping with his mother. After several mistakes the entire town fears that the UPS man is sleeping with all of their wives. It turns into a pretty good farce with a character from Fred Gwynne’s Pet Semetary role giving them advice on how to end the trouble. He compares it to the days of the milkman. Good setup with nice follow-through here.

Going Native: Butters is mad as hell, and he’s not going to take it anymore. He’s been lashing out at everyone. Turns out he needs to return to his “native” land for a coming of age ceremony to set him right. His native land? Hawaii. There he finds himself in the middle of a war between the “natives” and the tourists. Butters can carry an episode, and here’s the proof.

Obama Wins: The election show actually avoids the politics of the situation and becomes a better show for it. Cartman rigs the election by stealing hundreds of thousands of Romney votes in key states. Is he a fan of Romney? No, he’s doing it for the Chinese who have a deal with Obama. If they rig the election, Obama will force Disney to give them the rights to Star Wars. Cartman wants to play Luke’s son. When Mickey Mouse decides to wield a light saber and enter the fray, all bets are off.

Cartman Finds Love: Typical Cartman episode. That’s always a good thing. When a new girl starts at school and on the cheerleading squad Cartman decides to play cupid and get her together with Token because they’re both black. He thinks that’s the way it ought to be. The problem is that the girl has fallen for Stan, and Cartman pulls out all the stops to “fix” the situation. He even claims to be Stan’s gay lover.

Raising The Bar: Cartman finally admits that he’s fat to get a scooter chair. It’s really so he can cheat in the annual Easter egg hunt. It causes the rest of the world to wonder how the “bar” got so low. Of Course, James Cameron sets out in his ship to discover the “bar” and raise it. Okay, cool idea….weakly executed. The jokes are just too obvious, or they’re too much of a reach.

A Scause For Applause: Scientists discover HGH and other banned substances on the Shroud Of Turin. They conclude Jesus was on drugs when he did his miracles. Everyone gives up their What Would Jesus Do bracelets…all except Stan, who becomes an international inspiration for standing up to the trend. His STANd Up for whatever becomes a marketing success…until it’s discovered he might have removed the bracelet and used superglue to put it back on. It’s obviously a stab at Lance Armstrong, and the Dr. Seuss stuff is okay for a little while. The episode meanders too much and never quite brings it all home.

A Nightmare On Facetime: The Halloween episode has Randy buy a Blockbuster because the price is so cheap. Of course, it’s all about how he doesn’t understand that video is dead. Of course, the joke is now being sold on a Blu-ray or DVD. It’s too early for this one, and it’s all so forced.

Butterballs: With a name like that do I really have to explain why it’s ugly? Actually, most of it is OK. Butters is being bullied, so Stan makes a pretty kick-butt anti-bullying music video. It backfires on him, and it’s the end that turns extremely ugly as he ends up doing a “naughty” thing in San Diego. What makes it worse is that the San Diego activities are the subject of another musical piece that dominates the set’s menu system. Come on, guys!

Sarcastiball:  When Randy Marsh hears that the school is doing away with kickoffs for student safety, he goes off on a sarcastic rage that gets taken seriously. Suddenly the NFL is switching to his ideas, and he’s the head coach of the Denver Broncos. It gets ugly when Butters starts marketing his energy drink. Once you know what that is, ugly is exactly what you’ll be thinking.

Reverse Cow-Girl: Just take my word on this one.

Each episode of South Park is presented in a 1.78:1 aspect ratio. Colors are fantastically bright in this 1080i image. Brought to you by a solid AVC/MPEG-4 codec, the picture certainly looks as good as it ever did. You can really appreciate those special things like the comic frames. This is starting to look better with each year.

Stone and Parker are back with their “commentary minis”. The boys do address the controversy in the mini’s but turn it into a joke; when they say they’re about to explain, you get two minutes of beep and are returned to them saying that was basically the story.

The thing about South Park is that it’s become so hit-or-miss. When the show is good, it can be very good. There are times they’re faking it, and you won’t even get an argument out of Parker or Stone. They’re almost proud of the way they’ll throw stuff out there to see what sticks. To be fair, it’s hard to be so clever and on for that long a time. Maybe comedy “is just like taking a dump. Sometimes it comes naturally, and sometimes you need to give it a big slimy push.”

Gino Sassani is a member of the Southeastern Film Critic's Association (SEFCA). He is a film and television critic based in Tampa, Florida. He's also the Senior Editor here at Upcomingdiscs. Gino started reviewing films in the early 1990's as a segment of his local television show Focus. He's an award-winning recording artist for Omega Records. Gino is currently working on his 8th album Merchants & Mercenaries. Gino took over Upcomingdiscs Dec 1, 2008. He works out of a home theater he calls The Reel World. Favorite films: The Godfather, The Godfather Part II, The Body Snatcher (Val Lewton film with Karloff and Lugosi, not the pod people film), Unforgiven, Gladiator, The Lion King, Jaws, Son Of Frankenstein, The Good, The Bad And The Ugly, and Monsters, Inc.
The Neighbors: The Complete First Season “31 Nights Of Terror” Halloween (35th Anniversary Edition) (Blu-ray)