Posted in: Disc Reviews by Gino Sassani on November 6th, 2013 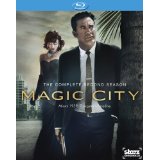 Ike Evans (Morgan) owns the most swank hotel in Miami. It’s the Miramar Playa. He bought the land at a song from his deceased wife’s family, and he’s turned it into a luxury city where the likes of Frank Sinatra call home. He’s determined to make it without caving to the influence of his minority partner, who happens to go by the name of The Butcher. He’s Ben Diamond (Huston), and he wants the hotel to become a kingdom of gambling and other profitable vices. Sure, Ike allows a little prostitution and backroom bookie action, but he wants to keep the hotel pretty much legit. That’s hard with a bank nut that runs $65,000 a month.

He has a young wife, Vera (Kurylenko) who was once the sensational Vera Cruz, a Cuban Tropicana dancer. He has two sons. Danny (Cooke) is studying law and doesn’t want any part of the hotel business. He’s being recruited by the DA’s office in order to get a man inside. They don’t really want Ike. They want Ben Diamond, and if they have to squeeze Ike to get to him, then that’s what you might call collateral damage. Danny’s in love with Mercedes (Garcia-Lorido), who is a maid at the hotel and daughter to Ike’s hotel manager Victor (Vazquez). Victor’s wife was killed in the Castro takeover of Cuba, and Ike’s trying to get her ashes out. Stevie (Strait) is Ike’s youngest son. Stevie tends bar in the hotel’s famous Atlantis Bar (remember that Miami bar in Analyze This)? He does want the life of his father. He’s also a bit of a womanizer. But he’s fallen in love with Lily Diamond (Marais), who also loves him. They have a rather torrid affair. The only trouble is that Lily is The Butcher’s wife, and he is the jealous type.

Part of the problem can be found in the acting. I love Jeffrey Dean Morgan. He was great on Grey’s Anatomy and Supernatural. I just don’t buy him here. It’s almost as if the actor’s not sure exactly who Ike is. He plays it too inconsistently for us to ever really buy him as real. The women on the series have much the same problem. They don’t ever feel real to me, and this is in spite of the wonderful production design that gives us as authentic a surrounding as you could hope for. From set design to wardrobe, this series is absolutely wonderful, but the characters just don’t ever appear to fit in with their surroundings. The one very notable exception is Danny Huston who plays The Butcher, Ben Diamond. His portrayal is nothing short of incredible. He’s a brute of a mobster, and Huston scares the crap out of me every time I see him. He’s totally convincing. Huston overpowers every scene that he’s in. He does this in the most subtle ways. He displays his violent danger by merely a glance. His eyes are terrifying, to say the least. I can see a series focused on this character as being far more compelling. I find myself wanting to see his world and caring so much less in Ike’s. Ike is just one of his many victims, and I’m so eager to move on to his other prey. I’m quite sure that he’s the reason the show has any following at all.

Another notable but underused exception this final season is James Caan as Sy Berman. Sy is a Chicago mobster who is even higher than Ben. You could say that Ben has been his representative in the Miami gambling venture. Together they want to replace what they lost in Havana when Castro took over with Miami. Ben has been bribing state representatives in order to push through a legalization of gambling in Miami. It’s really the centerpiece of both seasons of the series and comes into sharper focus this season.

Of course, Ike doesn’t want the bill to pass, because he knows what Ben will do to the hotel and that his usefulness will come to an end. We learn that Sy has been pretty much protecting Ike from Ben’s wrath, ordering that Ike cannot be harmed (at least until after the gambling bill vote).

There is a little more life in the relationship between Ike and his sons, but that energy comes too late to save the show. Stevie takes up with Ben, who knows about his affair with Lily and wants to use him as a wedge against Ike. Danny is in the same position at the D.A.’s office. There they want to use him as a wedge against Ike. This all finally brings fireworks between the father and his sons by late in the series. It’s the first real spark of life I’ve seen from this relationship in two seasons.

Vera also gets stronger motivation this time around. She attempts to revive her dancing career only to find that age is taking its toll on her body. She may still have the looks but no longer the moves. What she’s willing to sacrifice for one more show finally brings the motivation her character has been sadly lacking.

The plot has been building toward the gambling vote, and when it happens it sets in motion the season/series final confrontations. Here things get quite interesting, but it all has to play out so quickly that one is left feeling a little cheated in the end. I’m not sure if they knew they were out while filming the finale. It appears they found out too late to make it build properly.

In the end Magic City finally started to live up to its potential just as it was too late. This season certainly has its moments. It’s worth a look, of course, but perhaps not enough to invest on putting it on your shelf.

The writing suffers from a serious pacing problem. The story doesn’t move along fast enough to entertain. It’s almost as if the filmmakers are lingering just so you’ll continue to admire the wonderful design. It’s a text book example of style over substance. I have no doubt the crew work hard to put this show on. I wish the series itself was worthy of the effort.

Each episode is presented in its original aspect ratio of 1.78:1. The 1080p image is arrived at with an AVC MPEG-4 codec. This is a period piece that utilizes a lot of dark sepia-tone to the visual style. It works, and the high-definition image is absolutely convincing. Black levels are quite high, and the image is razor-sharp. Colors don’t really dominate most of the time, but there are moments where they do pop.

The Dolby Digital TrueHD 5.1 is pretty tame. Dialog is perfectly paced, and the music has a nice dynamic edge to it. There is little low end here, and the surrounds are pretty much front and center.

The extras are a bit disappointing. I hate when they make me work hard for 2-5 minute features. That’s what you get here.

The Gamble For Havana: (3:05) Cast and crew talk about the implications of the gambling vote on the various characters.

The Criminal Element: (4:47) Here we explore the ways each of the characters are engaged in criminal activity.

Tales From The Underbelly: (4:59)  The focus here is on certain character moments in the season. There’s also a little on Caan’s involvement this season.

The Music That Makes The Magic: (5:52) The various musical period pieces are explored here. Each episode usually ended with a musical montage.

The world of cable series has brought us some of the most ambitious and compelling television shows we’ve ever seen. There’s no censor board to answer to, so that means the shows have the freedom to expand into visual areas that have long been taboo on network shows. Nudity, sexuality, language, and even violence are often huge parts of these kinds of shows. Because there isn’t really a ratings pressure, the shows can also cater to more specialized audiences. Of course, it’s not completely true there are no ratings issues. For these networks it’s getting the carriers to distribute their networks, and for some it’s signing up premium members. There’s little doubt that HBO did enjoy subscriptions completely tied to having The Sopranos. But that kind of programming is no longer rare. It no longer shocks us with its novelty, and the standards for quality have been established at a high level. When you watch a cable show, you don’t just expect R material. You expect film-quality production values on the small screen. You also expect quality writing and compelling drama. In the case of Starz’s new Magic City, you’ll have to settle for two out of three. You get the edgy R material and outstanding production values. Unfortunately, the series misses more than it connects on the compelling drama front. In two seasons we have now seen the full Magic City story played out “before our very eyes”.

Gino Sassani is a member of the Southeastern Film Critic's Association (SEFCA). He is a film and television critic based in Tampa, Florida. He's also the Senior Editor here at Upcomingdiscs. Gino started reviewing films in the early 1990's as a segment of his local television show Focus. He's an award-winning recording artist for Omega Records. Gino is currently working on his 8th album Merchants & Mercenaries. Gino took over Upcomingdiscs Dec 1, 2008. He works out of a home theater he calls The Reel World. Favorite films: The Godfather, The Godfather Part II, The Body Snatcher (Val Lewton film with Karloff and Lugosi, not the pod people film), Unforgiven, Gladiator, The Lion King, Jaws, Son Of Frankenstein, The Good, The Bad And The Ugly, and Monsters, Inc.
Bonnie & Clyde: Justified Clear History (Blu-ray)