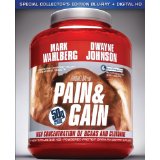 Pain & Gain is based on the stranger-than-fiction true story of a gang of bumbling bodybuilders. Their sordid, mid 1990s tale was first chronicled in a three-part series by Pete Collins first published in the Miami New Times in 1999. Daniel Lugo (Mark Wahlberg) is an ambitious personal trainer in Miami’s Sun Gym. He’s also a self-described “doer” who believes the way to prove yourself is to better yourself. Daniel loves the American Dream with a vengeance — after all, America started off as a bunch of scrawny colonies before beefing up and becoming the world’s preeminent superpower — which is perfect, because his personal and professional role model appears to be Tony Montana. Instead of sitting around and waiting for freedom, equality and opportunity to come knocking, Daniel decides he wants what the other guy has.

Of course, we’re still talking about a Michael Bay movie here; the guy isn’t going to ditch all his habits overnight (especially not when he has an R-rating to play with). The Sun Gym gang holds Victor captive in a sex toy warehouse, seemingly so one character can inevitably smack another around with a dildo and so that Bay can indulge in some juvenile humor. There’s also a thoroughly unnecessary bit of literal toilet humor, gratuitous slo-mo/fast cuts/swooping camera work (one violent sequence is a direct descendant of the Haitian shootout from Bad Boys II), and several upskirt shots of a model’s butt (Bar Paly grabs the baton from Transformer: Dark of the Moon’s Rosie Huntington-Whiteley). And if you thought you were getting out of this movie without a running joke about how steroids shrink testicles, then shame on you. That being said, the violence in this film — which, like all of Bay’s efforts, looks spectacular — is more impactful than what we’ve seen from Bay in a long time. It also serves as an effective reprieve from the twisted metal/CGI puppet fights the director has been staging most recently for the Transformers films.

Pain & Gain is presented in its original aspect ratio of 2.40:1. The 1080p image is arrived at with an AVC MPEG-4 codec at an average 40 mbps. One can certainly complain about the lack of extras, but every bit of space on this disc went into the high-definition image presentation. The image is quite bright and sharp throughout. Sometimes there’s more texture that you would like, but the complete feel of the intended shoot slips through every time. Black levels are superior and colors are usually bright. The Florida sun has an aspect to its quality of light, and this film appears to have imitated it quite accurately. Perhaps the most impressive element here is the spot-on contrast that gives you terrific separation between dark and light. It’s a surreal world, to be sure, but just enough natural element sneaks through to grab you for the ride.

The DTS-HD Master Audio 7.1 has tremendous presence. There’s an energetic, often manic pace to the film, and the audio pulls you completely into that atmosphere. The music sources are your main surround elements as well as any of the dynamic boom you get from your sub. The dialog is pitch-perfect, as is the placement. There are some pretty wild, yet subtle things coming from the rear speakers that help keep the illusion very much alive and immerse you into the crazy action.

The earlier release had no features. There is one multi-part feature on this edition.

The A Game – Michael Bay’s Pain & Gain: (57:20) This feature is split up into eight parts with a handy play-all. The best part of the behind-the-scenes footage is how much laughing Michael Bay is doing. He obviously loves what he does, and it shows. You get the usual sound bites from the cast and crew.

If you’re interested in this feature, it’s the only reason to buy the Blu-ray over again. If you haven’t gotten it yet, this is the version to buy.