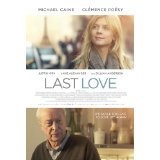 We’ve been conditioned to expect certain things when it comes to movies about love. The genre has become synonymous with chance encounters, kisses in the rain, and last-second declarations of love. (A tragic/downer ending is purely optional.) The most interesting thing about Last Love is how it explores the sort of deep connection between a man and a woman that isn’t necessarily tied to physicality or even romance. It’s such a refreshing change from the love story norm that it made the parts of the film that don’t quite work more palatable.

Last Love — shortened from its original title, Mr. Morgan’s Last Love, and based on a French novel — opens with an arresting image of a grief-stricken man sitting at his dead wife’s bedside. Even before he opens his mouth to speak, Michael Caine uses every line on his hangdog face to convey immense personal loss. The action flashes forward three years with retired philosophy professor Matthew Morgan (Caine) living alone in his impossibly handsome French apartment and casually/unsuccessfully trying to kill himself by downing a handful of pills.

Matthew lives an intensely solitary life with only the memory of his late wife Joan (Jane Alexander) to keep him company. Things change after a (trope alert!) chance encounter with a kind-hearted young man named Pauline (Clemence Poesy) on a bus. Pauline is a dance teacher who reminds Matthew of his late wife. Matthew starts coming out of his shell as he and Pauline become close, much to the chagrin of Matthew’s estranged adult children, Miles (Justin Kirk) and Karen (Gillian Anderson). The kids — particularly Miles — can’t wrap their heads around the bond between their father and Pauline, who they assume is some sort of gold digger.

Writer/director Sandra Nettelbeck (Mostly Martha, which eventually became No Reservations) displays impressive patience and detail in establishing Matthew’s lonely life — he’s been in Paris for at least three years, but he can’t speak a lick of French — and his bond with Pauline. The one false note during these early scenes is Colette (Anne Alvaro), a pleasant and semi-frequent lunch partner of Matthew’s; the movie doesn’t really bother explaining who the heck she is, so when she takes off abruptly, it’s more confusing than impactful. Unfortunately, the strong start makes the final-act swerve into melodrama and not-totally-convincing romantic pairings more of a letdown.

On the bright side, Last Love gives movie fans the increasingly rare chance to see Michael Caine carry a movie. As good as he is as the sort of wily, paternal mentor who classes up Christopher Nolan films, it’s great to see Caine take on a lead role and crush it. The actor has never lost the movie star magnetism that draws audiences to him, which makes the idea that a much younger girl like Pauline would be intrigued by him more believable. Less believable is the fact that Matthew is supposed to be American, but Michael Caine can’t help but sound like Michael Caine.

Poesy (In Bruges, Harry Potter) does a fine job of grounding Pauline and preventing her from slipping into Manic Pixie Dream Girl territory. Nettelbeck and cinematographer Michael Bertl make the actress’s blonde hair seem resplendent, which serves to further brighten Matthew’s fortunes when she enters his life. Pauline, however, is meant to be a kindred, lonely spirit in search of a family, but the movie doesn’t spend enough time with her to make her totally legitimate. For instance, we fleetingly meet someone who is purportedly her boyfriend, but he also vanishes without a trace. Pauline winds up being more of an idealized abstraction than a fully-formed person.

The father-son material between Matthew and Miles — who is a lot more like his dad than he’d care to admit — is interesting, but mostly falls flat. Kirk, who proved to be an endlessly playful actor during his eight seasons on Weeds, is saddled with playing the film’s most dour character. Thank goodness for Anderson — continuing to break free from her poker-faced Dana Scully shackles — for giving Last Love its spark as Matthew’s brazen daughter, who clearly took after her mother. (Joan is vivaciously embodied by Jane Alexander in the brief moments the dearly departed character pops up.)

The good news is Last Love looks and sounds great, even when the movie isn’t totally working. In addition to Bertl’s sumptuous cinematography, the film has a jaunty score by the great Hans Zimmer which bounces nicely off the more melancholy images on screen. Overall, this is a lovely French drama that isn’t quite as affecting as it could’ve been. More importantly, Caine’s leading man performance is a late-career highlight in what has already been an astounding career.