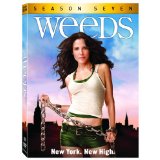 I completely understand if you bailed out on Weeds a long time ago. The fact is the current show bears little resemblance to the subversive, suburban sitcom that became one of Showtime’s first comedy smashes. That’s partly because the tone of the show took a dark turn into Mexican cartels and human trafficking after the end of season 3. Even worse, the once-fresh characters had become, at best, reliably annoying — think Kevin Nealon’s Doug Wilson ­— or, at worst, completely unlikable (like Mary Louise Parker’s Nancy Botwin, the leader in the clubhouse for the title of TV’s Worst Mom.)

But here’s why I’m actually ok with the way Weeds has played out (besides my immense crush on Mary Louise Parker): what else were creator Jenji Kohan and her team supposed to do? If season 7 rolled around, and Nancy was still dealing pot in Agrestic, the show would get crushed for never evolving. In fact, given Nancy’s relentless ambition and reckless behavior, I think the show has progressed in a semi-realistic way. Well, except for the part where she always gets out of impossible jams.

That brings us to season 7, which starts with Nancy getting out of jail after serving a three-year stint for a murder that middle son Shane (Alexander Gould) committed. (Nancy’s version of good parenting.) Now on the loose in New York City — but, really, a bunch of L.A. sets with B-roll footage of NYC streets mixed in for good measure — Nancy begins making moves to start dealing pot by episode 2 and is eventually reunited with her family: brother-in-law Andy (Justin Kirk), older sons Silas (Hunter Parrish) and Shane, and eternal tag-along Doug.

The bad news is the first handful of episodes in this set more closely resemble the Weeds of recent years: occasionally funny, but with the central characters too scattered and segregated to make us care for any of them. The great news is the back two-thirds of season 7 contain some of the very best stuff since Agrestic burned to the ground. (I was particularly impressed by “Object Impermanence”, the terrifically madcap “Synthetics” and the slick “Qualitative Spatial Reasoning”, episodes 6, 8 and 12, respectively.)

Not surprisingly, this was done by going back to basics. Besides the callbacks to the early years — including the re-use of Andy’s preferred alias and the return of an original character…sorry, Romany Malco fans, it’s not Conrad like we hoped — the show did a much better job of connecting all the main and supporting players. As a result, Doug got his first legitimate storyline and proved useful for the first time since, maybe, ever. Also, even though Andy is up to his usual oddball adventures — it often seems like that character is secretly starring in his own spinoff and just happens to wander onto Weeds from time to time — the writers found a way to have him circle back to the main plot and make the character grow. Ok, the relationship with the polyamorous couple didn’t have much to do with anything, but his ill-fated Copenhagen Wheel bike accessory brought us a grown-up Andy with legitimate ambitions.

The big-name guest stars this season were a mixed bag ranging from good (Jennifer Jason Leigh as the angry sister who actually envies Nancy’s exciting trainwreck of a life and Martin Short doing a creepy/hilarious variation on his Damages lawyer) to less good (Michelle Trachtenberg letting her eye makeup do most of the acting) to inconsequential. (Why was Aidan Quinn here again?)

Still, the big takeaway watching season 7 is that everyone involved in making the show believes Hunter Parrish is destined to become a huge star. Besides outfitting him in tight T-shirts and finding any opportunity to have him be shirtless (Silas became a male model in Denmark), the show gave Parrish the most grown-up material he’s ever handled, and actor was more than up to the task of going toe-to-toe with the great Parker. Silas wants his mother to treat him like a man, and fails to understand that, like any mother, his Nancy will always see him as her kid. While Nancy is sparring with Silas, Shane is doing everything he can to get his mother’s attention and win her approval, including befriending a gruff detective (nicely played by guest actor Michael Harney) so he can help protect Nancy’s business. Gould has made Shane’s oddness more subtle, and is also doing a nice job of underplaying the pain the kid is in. (Even if he sometimes overplays the anger.) Gould and, especially, Parrish had more to do this year than ever before, and they’ve handled it very well.

Then, of course, there’s Nancy herself. More than once in season 7, a character implores Nancy to give up the drug game and dedicate herself to becoming a good mother, particularly to youngest son, Stevie. Despite dealing drugs for seven seasons, Mary Louise Parker still has Nancy alternate from being a cool, confident pot goddess to an in-over-her-head ditz when she meets someone truly menacing. Of course, part of that is Nancy herself putting on a performance.

Although Weeds may have started out with Nancy dealing pot so she could maintain the suburban lifestyle she and her family had become accustomed to before her first husband’s death, it has become clear that Nancy deals pot because she loves it and it just might be the only thing she’s good at. Even though season 7 ends with a shameless, infuriating cliffhanger — Kohan admits in a commentary that she had to craft an ending without knowing if she was getting an eighth season — this is the strongest batch of episodes Weeds has offered in a long while because, like Nancy, the show got back to basics and to doing what it does best.

Weeds – Season 7 is presented in an aspect ratio of 1.78:1. The 1080p image is arrived at with an AVC MPEG-4 codec at an average of 28 mbps. Even though the show barely filmed in New York City, I would’ve liked to have seen more of the visual character Weeds brought to some of show’s previous settings, like Mexico or the various road trip stops in season 6. That being said, the image is impressively sharp and all the colors impressively pop when contrasted against what should’ve been an even grittier backdrop.

The DTS-HD Master Audio 7.1 track is truly impressive and pretty much overqualified to pump out episodes of a half-hour sitcom. If you wanted to, you could have your neighbors listen along to season 7 of Weeds while you watch at home. Not much in the way of dynamics, but the dialogue is always suitably clear.

Cast and Crew Commentaries: When Kohan and the writers aren’t fawning over Parrish — which isn’t too disgusting because Parrish was very good this season — cast members Kirk, Nealon and Gary Anthony Williams (who played the rhyming Counselor Ed) are wonderfully making a mockery out of the very idea of commentary tracks. The tracks are available in episodes 1, 2, 6, 7, 11 and 13.

“Guru Andy’s Tricks of the Trade”: (8:37) Features an animated, intentionally low-fi intro that serves as an excuse to show some of Andy Botwin’s life lessons/most memorable monologues. My personal favorite involves a unique use for bananas from season 1.

“Puff Puff Pass” Q&A with Justin Kirk and Kevin Nealon: (8:01) In the best special feature on the disc, Gary Anthony Williams hosts web chat with the two regular cast members. It’s a lighthearted chat — Kirk and Nealon are chronic kidders, and Williams more than keeps up with them — but it’s still nice to see them out of character and slipping in some insight on the show.

“Growing Up in the Weeds” with Alexander Gould: (9:21) A somewhat bizarre special feature that initially appears to have a faux-sentimental tone but instead features Gould earnestly introducing Shane-centric clips from earlier seasons. Maybe I was put off because I was actually expecting this to be a mini-doc exploring how Gould went from voicing Nemo in Finding Nemo to playing the probably-sociopathic Shane.

Deleted Scenes: (6:25) Here we have a total of four scenes, with the best being an excised moment between Andy and polyamorous artist Maxeen. You can either  “play all” or watch them individually.

Multi-screen Comparison: (4:30) Episode 12 featured a nifty, multi-screen technique for its opening sequence. This special feature shows the Weeds production staff doing a dry run to practice the timing and pace of the sequence. No offense to the non-actors who appear in this thing, but comparing their dry run to the finished product is pretty amazing and reallymakes you appreciate the cast.

It’s incredibly difficult for any show to still be good by the time it reaches season 7 — some of the best shows of all time cashed in their chips before they even reached a seventh year — and I’d argue it’s even harder for a comedy to stay funny that long. (What shows have even accomplished this? The Simpsons? Curb Your Enthusiasm? Maybe Friends and Seinfeld? What else?) Weeds is never going to be the show people became obsessed with during its first three years, but I believe season 7 represents the best of what Weeds has to offer now.