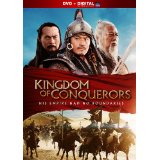 “So long as my enemies are alive, I will not die.”

During his lifetime, Genghis Khan reigned over one of the biggest empires the world has ever seen. There are literally dozens of action-packed epics that could be made about his various battles as head of the Mongol Empire, which included portions of China, Russia, the Middle East and Eastern Europe. But Kingdom of Conquerors curiously focuses on the one adversary Khan couldn’t vanquish: death.

Kingdom of Conquerors pretty much fast-forwards through most of Khan’s notable conquests during its prologue. The Khan we meet (played by Tu Men) is old, weary, and struggling to cope with his own mortality. Meanwhile, his army is becoming drained from their constant westward march. Khan enlists Gen. Liu Zhonglu (Geng Le) to seek out a Taoist monk named Qui Chuji (Zhao Youliang), who is believed to be more than 300 years old after mastering the secret of eternal life. With help from his devoted disciple Zhao Daoan (Yu Shaoqun) and a mysterious woman (Li Xiaoran) whose husband is a prisoner in Khan’s army, Master Qui makes the long arduous journey to meet the emperor.

This movie — a Chinese production helmed by actor/director Wang Ping — has impressive production values, which helps cover up some of the odd pacing in the story. For example, we can tell Master Qui’s trip to meet Khan took a long time, but we don’t really get a sense that it took *two years* until Master Qui casually mentions it. (Contrast that with Gen. Liu making the trip from Khan’s army to Master Qui in less than a minute early on in the film.) Ping displays the ability to stage some cool fight and battle sequences, but most of them are cut short before they really get going, particularly a grand-scale siege late in the film involving catapults.

It’s a shame Kingdom of Conquerors doesn’t slow down more often because the movie touches on some interesting ideas. Master Qui sees the value in every living thing, which obviously puts him at odds with Khan and an army that violently plows toward new lands. Khan demands the secret to eternal life, while Master Qui refuses to share it until the emperor gains a greater respect and understanding for the value of life. It’s clear the deeply spiritual Master Qui’s ideas for “immortality” may not be exactly what Khan has in mind. The movie, which is obviously based on historical events, incorporates some supernatural elements. Some of them actually work for the story’s themes — like the idea of resurrection — while others seem imported from a chopsocky action flick. (At one point, Master Qui performs a move called the “Flying Wind Fist”, which I always had trouble pulling off in “Street Fighter 2.”)

Instead of Kingdom of Conquerors, a more apt title for this movie would’ve been 2 Stubborn Old Guys. Youliang has the proper amount of grace to play Master Qui, but Men mostly comes off as a tired, mildly-amused old man as Khan. There’s no real sense from Men’s performance that this is the ruthless individual who conquered more than 20 percent of the known world. At first it seems like Le’s Gen. Liu is going to be the main character (he’s the narrator), but he ends up being mostly marginalized. Shaoqun does well with his relatively brief screen time as Master Qui’s apprentice/disciple, but the doomed romance between Xiaoran’s character and her husband felt like one storyline too many.

Overall, the film lacks focus. The relationship between Master Qui and Khan had the potential to be fascinating and fabulously adversarial, but it winds up falling flat. Although some of the performances come up short, most of the blame falls on the hurried storytelling. Genghis Khan isn’t exactly known as a pacifist historically, and this movie had a chance to shine a light on that aspect of his life. (History tells us Khan’s philosophical change of heart didn’t really stick.) In other words, there are many interesting stories that can be told Genghis Khan; despite an intriguing premise, Kingdom of Conquerors doesn’t really turn out to be one of them.