Posted in: Disc Reviews by Brent Lorentson on March 20th, 2014 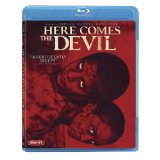 Remember the first film that kept you awake at night?  The film that had you keeping the light on, when every strange noise you heard was that of some monster you were all but certain was lurking in the darkness waiting for your eyes to finally close?  For me it was that thrill that got me excited about horror films, where every Saturday I’d watch Creature Feature, and in the evening I’d channel-surf till I found some horror film to keep me up into the late hours of the night.  Texas Chainsaw Massacre, The Exorcist, The Beyond and many others were the films that I would grow up and hold up on a pedestal as the modern classics of horror.  As I watch the new wave of horror coming out, sure, there are plenty of titles that are really fun, but the films that leave a mark, the ones we’ll be talking about 10 to 20 years from now, where are they?

Here Comes the Devil is one of those films.

The film opens with an intense sex scene between two women.  (Suddenly I imagine numerous males perking up and paying more attention now.) As the two lie in bed together they discuss their feelings and possible regrets about being physical with one another.  The moment is interrupted by a pounding on the door.  The woman who lives at the home goes to answer the door.  Big mistake.  She is attacked by a madman with a machete.  From upstairs the other lover comes down in time to hopefully save her lover; unfortunately she sees the man swing the blade down and sever the attacked girl’s fingers.  The man makes his quick escape, and we see him climbing a hill as the sun breaks over the horizon; in the process he spills a box filled with fingers.  Then BAM, we are hit with the opening titles.  This is a hell of good opening for any kind of film, period, and if you want answers to what the opening sequence is all about, you have to watch this film to its brutal, shocking end.

Felix (Francisco Barreiro) and Sol (Laura Caro) are just your regular happily married couple raising their two children Adolfo (Alan Martinez) and Sara (Michele Garcia).  The family has taken a trip and is having a picnic in a rural part of Mexico.  The kids end up venturing off on their own to explore a cave together.  As night arrives and the parents have not seen the kids the husband goes to look for them.  His search is fruitless and the police are called in, but they have to hold off on the search until daybreak.  The guilt and desperation is on display here, and the helplessness of their situation translates so well with their performances.

When morning comes and both Felix and Sol prepare themselves for the difficult day to follow, a police vehicle pulls into the motel parking lot and in the back are their children.  And it is from here on where the tension only grows.  It doesn’t take long before the parents notice that something is not right with the children.  At first blame is pushed towards Sara starting to become a woman as well as Adolfo simply being a teenager, but after the kids are sent to see a therapist he comes to the diagnosis that it was likely that a sexual trauma occurred during their disappearance.

Felix recalls seeing a vehicle up on the hill while he was searching for the kids, so he and his wife decide that they should find the man who was driving the truck along the hill.  It’s at the midway point of the film when Felix and Sol face the man that was on the hill, the man who in their minds sexually assaulted their children.  This confrontation is intense.  While watching you know what’s going to occur, and despite how much you shake your head and hope for a different outcome of the situation, when it occurs it’s a moment where you simply know things will only continue to get worse.  And they do.

For most of the film this very much feels like an intense family drama; some odd things occur, but it can almost all be explained away.  But then you hear the story about what happens to the babysitter, as she recollects the night she watched to two children as Sol sits helplessly listening.  For me this wasn’t a twist; after all, I knew it was a horror film.  But when the babysitter is done recalling what occurred to her, damn, it is a kick to stomach.

The film is creepy, beautiful and intense.  I think back on all the films about possession and the devil, and to be honest, not since The Omen, The Exorcist, or Rosemary’s Baby has a filmed achieved this level of horror.  Disagree with me all you want, but this film delivers true scares, and not once does it depend using loud noises to cause you to jump.  The success of the film rests in the great performances by everyone involved in the cast as well as the direction of Adrian Garcia Bogliano.  With beautiful cinematography, the film is filled with whip zooms and shots that reminded me of the Brian De Palma I grew up loving.

Anyone who calls themselves a fan of horror needs to see this film.  It’s a gem that created some buzz moving through the festival circuit, and it is so well deserved.

Here Comes the Devil is presented in the aspect ratio of 2.35:1.  The 1080p image is arrived at with an AVC MPEG-4 codec at an average of 20 mbps.  This is a film that has a beautiful warm image throughout with many reds and yellows.  In the commentary the director mentions how the work of Richard Stanley influenced him, and for fans of Dust Devil and Hardware you’ll be able to see that.  The blacks are well balanced here and are used to great effect when Felix and Sol visit the man they believe harmed their kids.  As a digital film shot on the RED, we get beautiful sharp images throughout.

The DTS-HD Master Audio 5.1 track comes with the option of listening in the original Spanish language or dubbed in English.  This is a loud film.  Everything from the booming death-metal-sounding score to the effects throughout as well as the dialog is simply loud.  It’s jarring and did play a part in creating a sensory overload experience.  All the speakers are utilized to make this a completely immersive experience; one of the sequences with an earthquake in the home was made so effective by the intense bass and well-placed effects.  The dialog is still clear and never drowned out.

Commentary with Director Adrian Garcia Bogliano:  This is a director who knows what viewers want when listening to these tracks.  He lets us in on many of his decisions on the creative process, everything from the visuals to the audio.  His interpretations of some scenes are appreciated, especially with a love scene between Felix and Sol.  But his insight into why he uses the zooms to his appreciation for Richard Stanley and much more makes this a tack, and I can’t recommend it enough for upcoming filmmakers.

Extended Nightmare Scene: (1:32) A brief extension of the nightmare scene, really couldn’t even tell you what was added.

Behind the Scenes Comparisons: (6:26) Here we get a look at several key moments of the film as we see what went into the production of the scenes, while in the bottom corner we see the final product.

Rehearsals: (9:34) Watching these actors go through the motions of getting to know their characters and working through improvisation is a fun thing.  Watching how these actors develop their parts through the final product you get to see how much goes into to their performances.

AXS TV: A Look at Here Comes the Devil: (2:55)  A very brief look at the film that works more as a trailer just to get people to check out the film.

This is a film I can’t recommend enough.  Is it perfect?  No, there are some minor hiccups I have with the final act, but when you watch a horror film you’re not looking for perfection, you are looking to be scared.  And that is where this film delivers.  For those parents out there with kids going through the changes of puberty, this film is going to mess with you in so many wonderful ways.  This isn’t a slasher film, and it’s not filled with constant jump scares.  Instead this is a film that sticks with you, that lies with you as you try to fall asleep at night.

Brent Lorentson is a horror writer and film critic based out of Tampa, Florida. With a BA in Digital Film, he co-wrote and co-directed Scavenger Hunt. His short stories have appeared in various horror anthologies. In 2019 his short script Fertile Blood will be a part of the anthology horror film Slumber Party. He is currently working on his first novel A Dark and Secret Place set to be released in late 2019. Favorite Films: Taxi Driver, Fight Club, I Saw the Devil, The Wild Bunch, Dawn of the Dead, A Clockwork Orange, Pulp Fiction, Heathers, The Monster Squad, and High Fidelity.
Frozen (Blu-ray) Kingdom of Conquerors