One Direction: Reaching for the Stars Part 2 — The Next Chapter 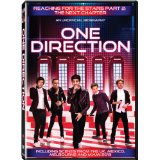 As soon as you saw the title of this review or caught a glimpse of the DVD cover art to the right of this paragraph, chances are you either rolled your eyes or squealed with delight. In less than five years, One Direction has become a worldwide boy band behemoth. The group’s devoted fans call themselves “Directioners” and serve as a helpful reminder that “fan” is short for “fanatic.” This DVD is purportedly aimed at those same fans, but I imagine there’s not much here a true Directioner hasn’t already seen on Twitter or YouTube.

“This is the story of how five ordinary boys from the U.K. & Ireland have taken the world by storm.”

American pop music audiences have long been susceptible to British Invasions. Our sonic defenses were first (and most famously) breached in the 1960s by bands like The Beatles, The Kinks, The Rolling Stones, The Who, and The Dave Clark Five. The fascination with musical acts from across the pond has continued throughout the ensuing decades, but a much smaller number of them have inspired the mania caused by that first wave. One of the few things this DVD does well is illustrate how One Direction has achieved the equivalent status in the 21st century.

Now before you start writing your hate mail for daring to put One Direction in the same paragraph with that batch of musical icons, hear me out. In this particular case, we’re not talking about the music. This isn’t a music review and the DVD doesn’t even feature any songs or musical performances. The closest we get is the (over)use of interstitial music that is reminiscent of the group’s smash “What Makes You Beautiful.” The rock guitar lick is similar enough to seem familiar, but different enough to prevent anyone from being sued. (To be fair, this release is labeled as an “unofficial biography.”)

And while I’m not anywhere close to what you’d call a Directioner — though there’s an unfounded rumor that I jam out to “Story of My Life” whenever it’s on the radio — the band has achieved its share of unequivocally impressive chart success. One Direction became the first U.K. group whose first album debuted atop the U.S. charts. (A feat that not even The Beatles or The Stones could pull off.) And you can’t quite call them a one-hit wonder, since they’re also the only group to have their first three albums debut at #1 in the U.S. I haven’t even mentioned the part where they accomplished all this in an era where people supposedly don’t even buy albums anymore.

Unfortunately, none of these impressive accomplishments are actually mentioned in the DVD. Instead, the cumbersomely-titled One Direction: Reaching for the Stars Part 2 — The Next Chapter is a mish-mash of fan footage, previously aired TV appearances, and talking-head commentary from entertainment reporters who follow the band. Although I didn’t see “Part 1”, I somehow was able to find my bearings and keep up with the plot.

The DVD follows the boys — Niall Horan, Zayn Malik, Liam Payne, Harry Styles and Louis Tomlinson — throughout their 2013 “Take Me Home” tour, including stops in Mexico, Australia, New Zealand and, of course, the United States. As mentioned before, there is no performance footage or musical clips of any of their songs, but we do see fan footage of the boys goofing off on stage. (Their antics include trying out a Southern accent in Atlanta and twerking at another stop.)

Overall, it’s a pretty favorable, non-controversial take on 1D. (I feel like I’m tight enough with the band to use their nickname…you’re right, I won’t do that again.) We get relatively superficial characterizations of the group’s members — standout star Harry is “too cool for school”, while Liam was originally the “dad” of the band — and how they’ve matured since super-producer Simon Cowell got the idea to take five failed individual contestants on Britain’s The X Factor and turn them into a phenomenon. Even the band’s more raucous exploits — like Harry hopping on a random fan’s party bus for the night — are mostly treated with a “boys will be boys” shrug.

In fact, the movie only threatens to become interesting whenever it suggests Cowell exerts a little too much control over these young boys. Achieving worldwide fame in less than five years is amazing, but it also means they’ve been working non-stop for almost five years. The fear of an impending meltdown — or an image-killing rebellious streak — is brought up, and the name of Justin Bieber is invoked. (Shudder.) There’s also the suggestion that band members have marching orders to seem attainable to their fans, which is tricky since one of them is engaged.

Mostly, what counts as a “controversy” on this DVD includes a band member lashing out against fans ringing their hotel doorbell in the middle of the night. (Definitely infuriating, but more of a superstar problem.) The disc also runs through some of their various/rumored trysts — Taylor Swift, Ellie Goulding, Kimberly Stewart — and the band’s feud with fellow boy man band The Wanted. Of course, this isn’t so much a “feud” as it is “an exchange of a few rude, taunting comments on Twitter.” It’s probably for the best, since there’s a 40 percent chance these two groups will be going on a nostalgia tour together in 10-15 years.

If you were hoping for any sort of new information or behind-the-scenes access to One Direction, you’ve come to the wrong place. (You’ll probably have better luck with One Direction: This Is Us, the 3D concert movie the lads released last year.) The 58-minute Reaching for the Stars more closely resembles one of those specials you might stumble across on the E! network.