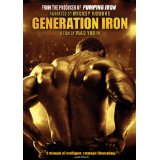 Bodybuilders present a series of fascinating contradictions. They objectively embody the ideal physical form, but there are also people who can’t even stand looking at them. They’re in tip-top shape, but instead of running, jumping or hitting each other, their competitions involve…posing. Pumping Iron, the 1977 documentary that turned Arnold Schwarzenegger and Lou Ferrigno into stars, was the first film to shine a light on the world of bodybuilding. Generation Iron stylishly and thoughtfully explores how the sport — and its participants — have grown immensely in the ensuing decades despite remaining a somewhat peculiar part of popular culture.

“They are an oddity. Stares…pointed fingers. They are in a freak show with no circus tent to hide in.”

Generation Iron focuses on eight bodybuilders vying for the title of Mr. Olympia in 2012. Phil Heath is the cocky defending champion looking to cement his place among the greats in his sport; Kai Greene is Heath’s more philosophical nemesis; Branch Warren is the injury-prone contender; Dennis Wolf is the German import looking to become the next Schwarzenegger; Victor Martinez is the hard-luck ex-con trying to get in shape in time for the competition; Ben Pakulski is open about using scientific methods to improve his chances; Hidetada Yamagishi is the underdog Japanese contender; and Roelly Winklaar is the enigmatic import from Curacao (by way of Holland) who travels with a female trainer nicknamed “Grandma.”

Presumably, these guys are part of a generation of bodybuilders who have benefited from the barriers torn down by Pumping Iron. (The two documentaries share a producer in Jerome Gary.) When Schwarzenegger won his first Mr. Olympia title, he took home $1,000; Heath won a reported $200,000 for his 2011 victory. Schwarzenegger and Ferrigno also appear briefly in Generation Iron; Ahnuld perfectly encapsulates the appeal of the sport by describing it as a unique combination of sports, entertainment, and art.

Depending on your personal reference point, these guys either look like statues of Greek and Roman gods or they resemble comic book superhero drawings. Rather than get into the specifics of how these guys become as big as a house — the subject of steroids is deemed taboo by some, while other participants speak openly about its effects — the documentary examines the more abstract (and relatable) issue of whether champions are born or made. On one side, there are relentless workers like Greene and Warren, who seem intent on forcefully willing their bodies into Mr. Olympia shape. On the other side, there are guys like Pakulski — who ridicules competitors that work harder instead of smarter — and Heath, the genetically-gifted former college basketball star.

Director Vlad Yudin’s cinematic approach to filming the doc yields quite a few visually impressive moments. (Particularly the segments that chronicle Greene’s artistic pursuits.) In fact, there are a couple of instances that feel a little too “movie-like” for what is purportedly a work of non-fiction. (It doesn’t help that a lot of the “drama” in Pumping Iron was eventually revealed to be fake.) I’m especially thinking of the moment where Warren is talking about injuries outside the gym one minute, then taking a nasty spill off his horse the next. Generation Iron is narrated by Mickey Rourke, an excellent choice that gives the proceedings some gravelly gravitas.

I doubt any of these guys will become a star on the level of Schwarzenegger — or even Ferrigno — but their compelling personalities and articulate testimony ultimately carry the day. Heath, in particular, is a magnetic character with loads of star power and self-awareness. It would be easy to dismiss Heath as an arrogant jerk who parachuted into the sport and stumbled onto greatness. But that would disregard his insatiable drive to excel and become an all-time great.

I was also consistently intrigued by Greene, the Zen oddball who had a troubled past and found his footing through bodybuilding. Meanwhile, Martinez has a troubled present, as he contends with autistic children and various legal woes. (While driving around town, Martinez admits to the camera that he has a suspended license.) The most obviously funny sequence comes when Wolf auditions for a movie that is described as a cross between Private Benjamin and Legally Blonde. The fact that there are zero non-documentary films listed on Wolf’s IMDb page should tell you how well it went. That being said, the doc resists either mocking or idolizing its subjects while showing that what they do is simultaneously silly and awe-inspiring.

Generation Iron includes a commentary, deleted scenes, a behind-the-scenes doc, and an extended interview with Ferrigno. By the time the Mr. Olympia contest rolls around, the field has narrowed to two serious contenders. To Yudin’s credit, the film makes the outcome of a competition that occurred almost two years ago genuinely riveting. Generation Iron accomplishes this by focusing on the down-to-earth personalities inside those larger-than life bodies.

One Direction: Reaching for the Stars Part 2 — The Next Chapter Eastbound & Down: Season 4 (Blu-ray)