The Right Kind of Wrong (Blu-ray) 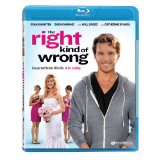 The line between romance and stalking is much blurrier at the movies. Behavior that routinely leads to restraining orders or arrests in real life tends to elicit “awws” from moviegoers and earns the romantic hero a kiss in the end. The Right Kind of Wrong is one of the more egregious examples I can remember, which is a shame because the Canadian romantic comedy has a likable lead and dares to give its characters multiple dimensions.

“Writing and the pursuit of a woman — like any impossible dream — are not about immediate results. They’re about telling the truth.”

Leo Palamino (Ryan Kwanten) is a failed writer-turned-dishwasher who becomes notorious after his ex-wife (Kristen Hager) starts publishing a blog — whyyousuck.net — dedicated to his every shortcoming. (Leo is an unrealistic dreamer who can’t handle criticism; he’s also afraid of heights.) The blog eventually becomes a best-selling book, and watching his ex-wife achieve the literary success Leo couldn’t attain is a textbook example of “adding insult to injury.” Things take a turn for Leo when he catches a glimpse of Colette (Sara Canning), the woman of his dreams. The only problem is Colette happens to be wearing a wedding dress when Leo spies her for the first time because she’s about to marry a handsome, Ken doll of a lawyer named Danny (Ryan McPartlin).

Undeterred, Leo crashes Colette and Danny’s wedding and proceeds to ask her out. With encouragement from Colette’s flighty mom Tess (Catherine O’Hara) and despite discouragement from his former editor Neil (Will Sasso), Leo proceeds to aggressively pursue Colette. Along the way, he endures some public humiliation and a few beat downs, which is a textbook example of “adding injury to insult.” It’s clear Leo and his ex were totally wrong for each other, but should the simple fact that Colette married a different guy first mean that she’s wrong for Leo now? And shouldn’t a guy like Danny — a rich, good-looking attorney who also does charity work —be right for just about anybody?

The Right Kind of Wrong is at its best when it’s thoughtfully exploring these thorny relationship issues. The movie is based on the book “Sex and Sunsets” by Tim Sandlin. (The author’s book title and cover art make a prominent cameo toward the end of the film.) I most appreciated that Megan Martin’s script neither stacked the odds in Leo’s favor nor did it turn Danny into a WASPy villain out of an ‘80s comedy. (McPartlin specializes in confident golden boys, having previously played Captain Awesome on NBC’s Chuck; I like to think it’s not a coincidence that Danny’s charity is called “Camp Awesometimes.”) That helps matters in terms of keeping things balanced, but it doesn’t change the fact that the audience is being asked to root for the breakup of a marriage.

“Life is messy, that’s its beauty.”

Unfortunately, these multi-dimensional characters I’ve been talking about inhabit a movie that’s a tonal mess. Director Jeremiah Chechik (Benny and Joon) sprinkles in a multitude of moments in this film that are aesthetically beautiful. (More on that in the Video section of this review.) But The Right Kind of Wrong often takes on a whimsical sheen that clashes with the serious points the film is trying to make about relationships. For example, the first time we see Colette she appears to punt a football about 100 yards while wearing her wedding dress. Also, Leo’s dishwashing dexterity — juggling and tossing plates and utensils without breaking them — is a visual quirk that lacks a significant payoff. As a result, the film vacillates uneasily between fanciful flights of fantasy and R-rated rom-com territory. (For some reason there are multiple subplots involving Neil’s private parts.)

The cast is game, and you can tell each of them was excited to play the varying shades of characters who are typically presented as cut-and-dry types. Kwanten (consistently naked great as the sweet and dim Jason Stackhouse on True Blood) is an ideal choice to play Leo. The actor’s scruffy charm helps carry Leo through his low points. More importantly, Kwanten’s charisma makes some of Leo’s more questionable behavior seem agreeable. Canning (The Vampire Diaries) intriguingly plays Colette as someone who’s had a tough life and is determined to fit in with her new affluent surroundings. Dealing with adversity turns out to be her strongest common bond with Leo, and Canning remains admirably prickly throughout the film.

Among the supporting players, O’Hara does very good work in her limited screen time as the mom who both damaged Colette and is tentatively trying to help put her back together. (I’d actually argue Kwanten and O’Hara have stronger chemistry than Kwanten and Canning.) The rest of the cast is hit-and-miss. McPartlin was impressive, but the continued presence of two precocious Indian kids who hang around Leo — their father is Leo’s boss — felt forced.

Then again, much of The Right Kind of Wrong feels forced. I suppose that’s to be expected in a movie about a guy trying to force his way into a married woman’s life. In the end, however, the movie simply isn’t good enough to make us overlook Leo’s homewrecking/spying/stalking antics.

The Right Kind of Wrong is presented in an aspect ratio of 2.40:1. The 1080p image is arrived at with an AVC MPEG-4 codec at an average of 21 mbps. The majority of this HD presentation is highly saturated, with the film taking on a sunny, yellowish hue. (The palette complements Canning and Kwanten’s blonde hair, along with Colette’s preferred sunflowers.) The Right Kind of Wrong was filmed on location in Alberta, Canada, and some of the mountainous terrain takes on a dreamy, painterly appearance. There’s also an impressive amount of detail in the close-ups of Leo’s frequently-bruised face, as well as the clever, computer screen opening credits. The one mild defect was a bit of motion blur in a scene where Leo is being chased on his bike by a Hummer. The predominantly saturated look here is obviously intentional, and it goes a long way toward achieving the heightened reality the director was trying to accomplish.

The DTS-HD Master Audio 5.1 track is pretty heavy on dialogue, which plays quite nicely with Rachel Portman’s imaginative score. Dialogue is kept in the front, while the music takes up residence in the rest of the surround speakers. While the music doesn’t fully drown out the understated atmospheric noises, it does prevent the track from being as immersive as it could’ve been. (Especially since so much of the film takes place outdoors.) Meanwhile, the subs make sporadic appearances, like when Colette kicks her booming punt or to support the musical cues.

Deleted Scenes: (6:02) The three scenes included here are actually quite good. They include an alternate opening to the film, where we see how Leo and his ex-wife met. There is no Play All option.

Behind the Scenes: (7:57) A pretty generic doc where the cast and crew talk about the story and the characters in the film. They also pat themselves on the back for not making Danny a typical bad guy. The conversation is more focused on the personal relationships and doesn’t really delve into the film’s more whimsical touches. I think a commentary would’ve been more enlightening.

The Music: (6:14) We go behind the scenes with Oscar-winning composer Rachel Portman (Emma) as she talks about developing music that fit in with the film’s themes. This is actually a pretty enlightening look at a film composer’s process as Portman talks about the various emotions — panic, joy, chaos — she sought to evoke during the film’s hang gliding scene.

The Right Kind of Wrong Rap: (0:53) The film’s two child actors — Matteen Devji and Maya Sami — perform a clever promotional rap touting the film and its actors. Well, truth be told Devji does most of the rapping while Sami serves as the silent, Rosie-like sidekick.

AXS TV — A Look at The Right Kind of Wrong: (2:58) This promotional mini-doc is basically a condensed version of the “Behind the Scenes” look that’s already included on this disc. Feel free to skip.

If the goal here was to make a romantic comedy that was as messy as real-life love can often be, then the filmmakers succeeded.

The Right Kind of Wrong had potential, but it ultimately paints too pretty a picture out of stalking and homewrecking.