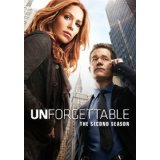 Detective Carrie Wells (played by Poppy Montgomery) and her former boyfriend/current crime fighting partner Al Burns (played by Dylan Walsh) have been noticed because of their uncanny crime solving percentage in the upper 90% (a fairly common thing in TV crime shows, but nearly unheard of in the real world) and get promoted to the NYPD’s Major Crimes unit. With this move, and the fact that this program bounced in and out of cancellation quagmire between the first and second season, all of the supporting cast (except for Jane Curtain as Medical Examiner Joanne Webster) and we are offered a new team of token (read: stereotypical) character types filling the void; including a sassy black female cop, an asian tech guy, and uptight yet quirky boss.

I was coming into this series with no prerequisite viewings of the first season, nor any knowledge of the characters. This was a major annoyance for the first episode as would discover that they had removed the opening narration that explained that Wells has a very rare (and very high functioning apparently) condition called hyperthymesia which grants her the ability to recall everything she sees and hears since she was a teenager. This is both an incredibly convenient ability for someone gathering evidence at crime scene as well as an incredibly convenient gimmick for this show as it takes all of the tough solving out of the police procedures and turns it into Well having frequent pregnant pauses to lay out all of the minuet details she recalled. Said condition would be eventually explained as episodes progressed but it made me wonder what the show title was for a decent amount of time.
The opening episode I found very deterring and I’m glad I was obligated to power through the entire season. All of the characters where very smug in this season opener and it made the show very unattractive to me. Those that watch shows like NCIS or CSI may be more accepting of such cocky attitudes but I personally find those shows hacky and am never charmed by those that are flippant in the face of victim’s deaths and would sooner puff up their egos or flirt than be aware of the fact that they are dealing with violent criminals.
As I mentioned before, the episodes do get progressively better and I credit much of this to the humbling of the lead characters when the story-lines get more personal. This is especially true by the episode entitled “Memory Kings” where Wells must deal with the murder of an academic who first therapeutically helped her deal with her condition, that may have driven her insane had he not done so. The plots of each episode are not exactly subtle. Our heroes deal with serial killers, nuclear bombs, hacker terrorists and globe trotting assassins. I can appreciate the almost campy level of how much is at stake in each tale. Though I should note that, although the stories do improve, there is still a lot left to be desired with some of the corny dialogue and character relationships throughout this season.
In my reviews I tend to send out kudos to any show that brings aboard certain actors and/or make reference to another program or film I enjoy. Here I’d like to said such kudos to Unforgettable for the episode “East of Islip” which featured guest appearance by Wayne Knight who works alongside his former 3rd Rock from the Sun cast mate Jane Curtain as a small town coroner/potential love interest. They have a playful energy and charm that stole the episode from the stars.

The DVD release features some deleted scenes, gag reel, interviews and featurettes in their extras sections.