Posted in: Disc Reviews by Brent Lorentson on June 25th, 2014 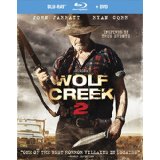 When the first Wolf Creek was released it was one of those films that had a lot of hype around it, and when I got around to watching it, I dug it.  It’s one of those films where the more I’ve watched it the more  I’ve gotten to appreciate it, not just for its gore, but the film has a solid story, and I appreciated that the film at no time allows you to get too comfortable. At any moment a character could be brutally murdered.  It’s the character of Mick Taylor (John Jarratt) who could equally make me smile with his crude outback charm or make me squirm with uneasiness the moment his hands took hold of a weapon.  We Americans seem to enjoy the notion of our Australian characters being in the vein of the playful Crocodile Dundee, but Jarratt takes his role of Mick to some dark, terrible places.

Writer and director Greg Mclean unfortunately hasn’t had the success I would have expected considering the strong following for Wolf Creek and his fun follow-up Rogue.  Now with the release of Wolf Creek 2, Mclean returns to the familiar territory of the untamed outback, and how does he fare?  To put it simply, this movie is insane; it’s unrelenting and pretty damn funny at times.

For those unfamiliar with the films, it is an answer to why so many people go missing without a trace in the Australian outback.  Sure, simply getting lost and being exposed to the elements without food or water can explain a lot.  But for Greg Mclean, his answer is Mick Taylor.  He prowls the backwoods and highways hunting for prey while masquerading as a good Samaritan.  He’s a skilled marksman, but he seems to relish in the pleasure of pain while torturing his victims in his lair hidden away in the middle of nowhere.

The sequel takes what elements we learned about Taylor the first time around and this time ramps up his insanity.  But what I appreciate is that Mclean doesn’t jump into the overkill; instead he introduces us to a new batch of victims, Rutger (Phillippe Klaus) and Katarina (Shannon Ashlyn), a German couple who have decided to backpack across the Outback.  We travel along with this couple, getting to know them as they explore the beautiful landscapes while enjoying the company of one another.  This is a trip where the two have decisions in their life to make for themselves and each other while they get ready to embark on the next chapter in their lives together.  Unfortunately Mick has other plans in mind.

Just as he did in the first film, McLean changes things up before we get too comfortable and think we have the story figured out when he introduces Paul (Ryan Corr).  Paul is simply another tourist travelling alone who gets entangled with Taylor and one of his unfortunate victims.  Taylor doesn’t enjoy interruptions, or foreigners for that matter, and that puts Paul in his crosshairs.

With an increased budget, the stakes are also raised as you’d expect in a sequel.  Grander chases, a higher body count, and “flying kangaroos” (seriously, this moment is just funny and insane all at once).  Some of the things that left me grinning and simply having a blast with this film I just can’t spoil here.  But I’ll say I doubt you’ll listen to “The Lion Sleeps Tonight” the same way again.  Not to mention seeing the brutality that comes along with a bullwhip, or the idea of playing ten questions with a psychopath to save your life.

This is one of those rare occasions where the sequel lives up to the original but goes a step further and improves upon it.  Is it as scary as the original?  Well, that is where I feel this may divide audiences.  It may not have the tension that the original delivers, but we do see just how depraved and sick Taylor is when we see his tunnels of horror in the final act.  It’s something that is not just unsettling but is one of those visuals that hits home and lingers when you start to realize how this could happen, that modern monsters like Mick Taylor do exist. After all,  that’s what made the family in The Texas Chainsaw Massacre so terrifying, because they could exist.  Perhaps this would draw more comparisons to the second TCM, but the point is this is a movie that for horror fans you just need to watch.  This is Ozploitation at its finest, and I’m ready to see more of Mick Taylor in action.

Wolf Creek 2 is presented in an aspect ratio of 2.35:1 The 1080p image is arrived at with an AVC MPEG-4 codec at an average of 24 mbps.  This is one of those films that shows just how beautiful of a setting the Australian Outback is.  The picture is clear and sharp throughout.  There is no interference that I could see during any of the film’s intense chases, and the separation of the blacks comes through nicely in the numerous nighttime shots but most noticeably in the tunnels during the film’s final act.  There was a bit of grain in a few of the night shots, but it was never enough to be too distracting.  What continues to surprise me is how well the Gopro cameras deliver such a sharp image. Granted they are only used in the scenes where cars are being wrecked, but still it’s impressive seeing this tiny little camera being an acceptable resource in bigger-budget films.

The DTS-HD Master Audio 5.1 track for this film is top-notch. Just from the first scene alone as the sound of the old windmill creaks in the wind, to the buzz of the flies in the heat.  It’s a nice nod to Once Upon A Time in the West, and thankfully the sound design holds up to the end of the film.  There is a brutal decapitation scene in which we may not see the gory details, but we hear every bloody yank and tear of flesh, and it is cringe-worthy.  With the German couple they are speaking in German, but the film does supply subtitles so you can understand the characters.  As for the rest of the dialog, it is clear with the exception of the thick Aussie accent Jarratt supplies for Taylor.

Creating a Monster: (52:07)   We get a solid behind-the-scenes look at the creation and production of Wolf Creek 2.  Broken up into numerous segments, there is plenty of behind-the-scenes info with the cast and crew involving the making of the film.  My favorite section dealt with the shooting of the scene with Taylor confronting the German backpackers.  A really nice feature that fans will enjoy.

Butcher’s Cut: Deleted Scenes: (23:56) There is a lot of material that has been cut from the film, mostly it involves the German backpackers.  I almost wish there was simply an extended version of the film, because just about all the scenes here are pretty good but were simply cut for time.  Normally I’d say you can just skip over the deleted scenes, but this time I feel these are worth a look.

I have no problem admitting how much I enjoyed this film.  Sure, it departs from the formula of the original and has a different tone, but I don’t see anything wrong with them giving us a film that goes a different direction than what you’d expect.  Mick Taylor is up there as a horror icon in my eyes; he’s just a brutal killer but has a sharp sense of humor that you’d expect from an Aussie Freddy Krueger.  This is a franchise I hope only continues, it’s the franchise horror needs in a genre that seems rely too heavily on current fads.

Brent Lorentson is a horror writer and film critic based out of Tampa, Florida. With a BA in Digital Film, he co-wrote and co-directed Scavenger Hunt. His short stories have appeared in various horror anthologies. In 2019 his short script Fertile Blood will be a part of the anthology horror film Slumber Party. He is currently working on his first novel A Dark and Secret Place set to be released in late 2019. Favorite Films: Taxi Driver, Fight Club, I Saw the Devil, The Wild Bunch, Dawn of the Dead, A Clockwork Orange, Pulp Fiction, Heathers, The Monster Squad, and High Fidelity.
Unforgettable – The Second Season 300: Rise of an Empire (Blu-ray 3D)