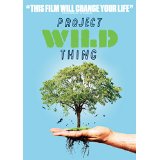 “The generational shift to an indoor existence has been strongly linked to a sharp decline in children’s well-being.”

That’s just a fancier, more eloquent version of the familiar lament that (these darn) “kids today just don’t play outside anymore!” It’s also the jumping-off point for Project Wild Thing, an inventive and engaging documentary that explores the apparent disconnect between today’s youth and the natural world they seem intent on ignoring.

The film “stars” British filmmaker David Bond as himself: a harried, married dad with two young kids. (Ivy, 5 and Albie, 3.) Bond frets that his children spend an inordinate amount of time staring at (TV, computer and phone) screens when they could be playing outside. He specifically worries about their long-term health, citing studies that reveal his kids’ generation is the first in human history to have a lower life expectancy than their parents. Bond admits there’s no hard evidence that technology is directly harmful to children; only that it has helped displace nature.

He also points to studies that suggest exposure to nature is largely beneficial to humans. With this and other information as his ammunition, Bond anoints himself “Marketing Director for Nature” and sets out to launch a real-life advertising campaign to get people excited again about a product that is free and has been around for millions of years.

Project Wild Thing follows Bond as he meets with environmentalists and neurologists to better understand the appeal nature holds for people — and why we seem to take it for granted. We also see him go straight to the source, as he visits with a classroom of kids and other youngsters to find out why they are averse to the outdoors. (This issue, the film argues, is particularly dire in the U.K.; uber-metropolitan London easily stands in for any world metropolis with scarce greenery.)

I was actually most intrigued by Bond’s meetings with marketing executives and brand advisors. In addition to enjoying seeing these guys in action — a pair of marketing execs effortlessly come up with a slogan for nature: “The ultimate playground” — I liked hearing about the psychology behind their strategies for attracting eyeballs and attention. Not surprisingly, simple is better.

Bond serves as an eager, lightly bemused stand-in for the audience throughout. This isn’t the first time the filmmaker has inserted himself into his own movie. Bond previously attempted to regain his privacy from the government and other companies in Erasing David. With Project Wild Thing, the motivation certainly appears to be personal. But it’s hard to shake the feeling Bond’s taken up this cause as a lark and that he’s eventually going to go back to his day job as a documentary filmmaker and full-time father/husband. (At the start of the film, he gives himself a two-month deadline to launch the movement.) In fact, that struggle is somewhat awkwardly portrayed on screen as Bond’s wife Katie worries that the campaign is taking too much focus away from his own family. I get that Bond and his family were established as “characters” early on in the film, but I wish he’d stayed totally on subject and kept clear of “family drama” territory.

That’s especially true when you consider the rest of Project Wild Thing is refreshingly vibrant. The director, who also co-wrote the movie with producer Ashley Jones, incorporates jaunty, pleasing graphics to illustrate his points and help capture the attention of younger viewers. The documentary clocks in at a brisk, relatively kid-friendly 79 minutes.

The idea that youngsters would benefit from a more active, outdoorsy lifestyle isn’t exactly original. (It’s actually one of the current First Lady’s most notable initiatives.) I won’t tell you whether or not Bond achieves his goal in the movie. However, Project Wild Thing certainly succeeds in putting forth the notion that — if we want to get kids and other people interested in occasionally exploring the outdoors — we all have to act like “Marketing directors for Nature” from time to time.

The Quiet Ones (Blu-ray) The Sacrament (Blu-ray)