Posted in: Disc Reviews by Brent Lorentson on August 21st, 2014 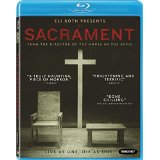 Horror doesn’t necessarily need to be about the supernatural or have an axe-wielding maniac to be terrifying.  Jump scares and gore effects are also some nice devices directors rely on to scare their audiences.  But for me, what really gets beneath my skin is the possibility of what I see projected up on the screen can become a reality in my day to day life.  The Sacrament attempts to show how quickly faith and love can quickly be turned and used as a weapon that can lead to the demise of the fragile and the faithful.

Eden Parrish stands in as the substitute to commune that many remember as Jonestown in 1978.  This may not be a direct remake of the events that took place in Guyana, but it’s impossible to ignore the many similarities.  Just as there was a documentary crew that investigated Jonestown, a documentary crew comes to Eden Parish, only the crew is hoping to find Caroline (Amy Seimetz), the sister to photographer Patrick (Kentucker Audley).  When Patrick arrives with the Vice magazine team led by Sam (AJ Bowen) and cameraman Jake (Joe Swanberg), the commune turns out to be nothing like they expected.

This voyage into the man-made Utopia is one that does not pretend to be something it is not, where as a viewer we know that of course this paradise is not what it seems, and it cannot end happily.  Even with the knowledge of the direction this film will go, it doesn’t change how some of the more unsettling events of the film linger with you long after the credits have passed.  In large part what makes this film so unsettling is that of Father, played by Gene Jones.  Jones is the religious leader who looks over his flock just as a father would, and when Sam and his crew eventually interview Father we see his protective side come out, and it is unsettling to say the least.

Just as Father attempts to play the role of the protector of his flock, Sam is on the cusp of becoming a father himself.  The unique bond that Sam and Father have adds to how unsettling things become, considering Sam understands just how Father feels when it comes to protecting his “family”.  When it comes to how genuine Father’s intentions are towards his followers, I still can’t decide if his intentions are genuine or simply self-serving.  And that is what becomes so disturbing about these kinds of cults that are led by the “true believers” where those involved are willing to lay down their lives for what they believe and are willing to sacrifice everything to maintain this way of life.

As found-footage films go, The Sacrament does rank as one of the better entries into the genre, but it does hurt the film in some ways.  Even though we don’t get too much of the shaky-cam footage, there isn’t much from a visual standpoint that offers anything we haven’t been inundated with over the past couple years.  I still feel Ti West’s previous efforts House of the Devil and The Innkeepers are stronger films, though I do appreciate this film as an exercise in trying something different from his previous works.

The Sacrament is presented in the aspect ratio 1.78:1.  The 1080p image is arrived at with an AVC MPEG-4 codec at an average of 18 mbps.  Due to the film being shot as though it were a documentary, which somewhat puts it in the found-footage category, this is at least one of the best looking films of the sub-genre.  Though this is all shot digitally, there has been some tinkering to affect the overall look of the film that helps it look all the more like a travelogue video that has simply gone awry.  The film has a very earthy color palette which suits the story very well and works as a nice contrast to the violence, blood, and colored fruit drink that follows in the final act.

The DTS-HD Master Audio 5.1 track plays off just as you would imagine audio would if this were a real documentary.  The dialog comes through great with all the characters involved, especially for the characters who are working the camera.  Even the scenes where we are hearing screaming and gunshots, it all sounds natural.  If this were any other kind of horror film the sound design would be lacking, but it was nice that the filmmakers stuck to the realism of shooting the film as they did.

Creating the Sacrament: Revealing the Vision: (21:07) A look at the process of how the film came together and green-lit before a script was even completed.  Plenty of discussion about the influence of Jonestown and Eli Roth’s influence on the film.

Working with the director: The Ti West experience: (5:56) Here we get to see West in action, as director and camera operator.

Preparing for Takeoff:  Behind the Scenes of the Helicopter Sequence: (4:52) Some of the work that went into completing one of the pivotal moments in the films dramatic ending.

AXS Look at The Sacrament: (3:38) This is becoming the standard on Magnet released homes that is somewhat a cross between an interview and a trailer for the film.

This is a solid effort from Ti West, but the glut of so many found-footage films factors into what frustrates me with this film.  The film is still worth a watch for the performances alone.  Though the film doesn’t exactly deliver much in the way of surprises, there are some powerful and disturbing images in this film that show how deadly one’s faith in the wrong hands can be.

Brent Lorentson is a horror writer and film critic based out of Tampa, Florida. With a BA in Digital Film, he co-wrote and co-directed Scavenger Hunt. His short stories have appeared in various horror anthologies. In 2019 his short script Fertile Blood will be a part of the anthology horror film Slumber Party. He is currently working on his first novel A Dark and Secret Place set to be released in late 2019. Favorite Films: Taxi Driver, Fight Club, I Saw the Devil, The Wild Bunch, Dawn of the Dead, A Clockwork Orange, Pulp Fiction, Heathers, The Monster Squad, and High Fidelity.
Project Wild Thing Revolution: Season 2 (Blu-ray)