The Quiet Ones (Blu-ray)

Posted in: Disc Reviews by Brent Lorentson on August 20th, 2014 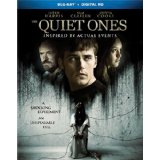 Under the revamped Hammer production company, The Quiet Ones is the new release from the legendary UK company that was known throughout the 50-70’s for its Gothic horror.  In this new resurgence of Hammer, no longer do we have Peter Cushing or Christopher Lee to look forward to gracing the screen, but what we do seem to be getting is a respect for what horror can be.  Horror seems to have bottomed out as of late.  Where horror seems to be delving into cheaper budgets and going the direction of found footage, which isn’t so much a bad thing, but as we all know the market is just saturated with this style of filmmaking.  We can blame The Blair Witch Project and the Paranormal Activity films for the glut of copycats trying to cash in, but thankfully there are still filmmakers who have the ability to bring something new to the table.  And that is just what The Quiet Ones does.

When we meet Professor Joseph Coupland (Jared Harris), he is lecturing a class at the University of Oxford about the supernatural.  His theory that he presents to the class is that the notion of ghosts is mistaken for something that exists in our own subconscious.  It’s this belief that Coupland has that prompts him to conduct an experiment where he plans to document that supernatural activity is nothing more than something that can be created with our minds and explained away by science.  It’s Brian (Sam Claflin) who is hired on to document the experiment and is unfortunately dragged into something that is far worse than he could have imagined.

The patient that the study follows is Jane (Olivia Cooke), who has been shuffled through the foster circuit and seems to have more than her fair share of craziness.  She has the ability to do things that no one can quite explain, but Coupland is certain that through his experiments he will be able to come up with some explanation.  It’s hard to not instantly sympathize with Jane; from the moment we meet her we see her being subjected to sensory deprivation experiments, and as the film continues her treatment only becomes far worse.  For Coupland he never seems to connect with the fact that Jane is a person but instead an object to be tested and subjected to experiments that do more than teeter on the line of torture.

As Brian attempts to document the experiment from behind the lens of his camera, he develops affection for Jane and eventually becomes her lifeline to preserve her humanity and possibly her sanity.

If the treatment of Jane was not horrifying enough, the unexplainable events that occur during the experiment are chilling.  The film hammers it home that they are not exploring the notion of ghosts but instead that we can create these unexplainable actions, such as hearing voices, unexplainable knocks, and objects moving, and that is only the start of what this film goes after.

Following the development of Brian’s relationship with Jane is what makes the horror and the tension in this film work so well.  We want to believe Brian can help her; we want to see these two manage to survive this terror.  As the activity intensifies and takes the shape of “Evy”, it grows to become unclear whether this is all manifested through Jane, or is there truly an evil entity wreaking havoc?

This is a film that succeeds in delivering a story filled with characters that get us to feel, whether its feelings of disgust or sympathy. The fact a horror film manages to get us to care is already an accomplishment.  Another film that came out earlier this year, Oculus, also attempted to pull off a smart and scientific experiment to prove/disprove the paranormal, only it fell flat for me.  The difference between these films is simply that one managed to get me to care what happened to the characters rather than trying to trick the viewer.

Director John Pogue delivers a good-looking, atmospheric film that nicely blends between the 16mm (really it’s digital but given the 16 mm effect) footage with the look of the rest of the film.  Blending the styles together with a very realistic 70’s period design helps lend to the believability of the film that allows for an immersive experience, as though we are a part of a documentary instead of a stylish horror film.

This is a film that may not be for everyone and raises some fun questions about the possibility of what ghosts really are.  While this may not be an instant modern classic as I believe The Conjuring is, The Quiet Ones is a solid horror film that delivers some solid scares.  And for those who don’t believe in ghosts or the supernatural, well, perhaps this is a film that may crawl under your skin a bit more, as it delivers some questions and explanations that should make even some skeptics think twice before passing judgment on unexplained things that go bump in the night.

The Quiet Ones is presented in an aspect ratio of 1.78:1.  The 1080p image is arrived at with an AVC MPEG-4 codec at an average of 16 mbps.  The overall look of the film is very drab and absent of any bright colors.  The heavy saturation helps add to the atmosphere that the filmmakers are trying to create.  Though the entire film is shot digitally, there is a lot of care and attention paid to the scenes involving sequences that are supposed to be shot in both 8mm and 16mm formats.  The mbps rate does have dips into the single digits throughout the film, and because of this I did notice some compression issues; most notably when a character was wearing a striped shirt we see some banding issues.

The DTS Master Audio 5.1 track is nicely put to work in this film.  As mentioned in the commentary, the way the composer Lucas Vidal took numerous sounds and composed his “score” from that is impressive.  One of my favorite moments is when the team is with Jane while they are performing an experiment and the sound design is utilized to create the effect that “Evy” is all around us.  One thing I did find annoying is that the dialog seemed a bit low in contrast to the rest of the audio, which had me cranking the volume to hear the dialog clearly.

Audio Commentary with Director John Pogue and Producer Tobin Armbrust:  It’s a solid commentary that offers plenty of information about the production on the film.  They also give a nice little back story about what influences they had towards making the film and what “true events” inspired the film.

Welcome to the Experiment: The making of The Quiet Ones: (34:53) A comprehensive looking behind the inspiration and making of the film.

An Ominous Opening: (8:24) This is my favorite feature, since it’s not very often that we get to see everything that goes into the making of an opening credit sequence.

Deleted Scenes: (12:16)  Simply a collection of cut and extended scenes; the only one I feel could have done some good being put back in the film is a scene involving the transfer of Jane to the new house.

Outtakes: (3:29) Scenes of the characters flubbing scenes, but mostly a lot of scenes where Jared Harris is being bleeped out.

This year seems to be lacking in churning out big horror films.  Though this may not be on par with The Conjuring, this is still a film I recommend for those quiet rainy nights with all the lights cut off.

Brent Lorentson is a horror writer and film critic based out of Tampa, Florida. With a BA in Digital Film, he co-wrote and co-directed Scavenger Hunt. His short stories have appeared in various horror anthologies. In 2019 his short script Fertile Blood will be a part of the anthology horror film Slumber Party. He is currently working on his first novel A Dark and Secret Place set to be released in late 2019. Favorite Films: Taxi Driver, Fight Club, I Saw the Devil, The Wild Bunch, Dawn of the Dead, A Clockwork Orange, Pulp Fiction, Heathers, The Monster Squad, and High Fidelity.
Rosemary’s Baby (2014) (Blu-ray) Project Wild Thing