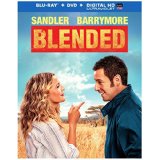 Adam Sandler took a bit of a beating with Blended. His previous, non-Grown Ups outing (That’s My Boy) was Sandler’s first comedy in a while to severely underperform at the box office, suggesting audiences might be tiring of the comic’s (critic-proof) brand of humor. Then came Sandler’s pre-release admission that he makes movies based on where he’d like to get paid to vacation. Blended went on to underwhelm at the box office, at least by the reliable standards of Sandler comedies. (It brought in $123 million worldwide on a reported $40 million budget, though only $46 million of that came from the U.S.) Maybe it was the lowered expectations, but I kinda liked Blended.

“Love is a many blended thing.”

There really should’ve been good vibes going into this project. Blended marked the on-screen reunion of Sandler with Drew Barrymore. The duo last co-headlined a movie 10 years ago (2004’s 50 First Dates) and their first collaboration (1998’s The Wedding Singer) is probably my favorite Sandler comedy. Sandler even enlisted Wedding Singer director (and frequent collaborator) Frank Coraci to helm Blended.

But despite those happy feelings going in, the first glimpse we get of Sandler and Barrymore back together is (comically) unpleasant. Newly-single parents Jim (Sandler) and Lauren (Barrymore) are on the first date from hell. (For some reason, Hooters isn’t her idea of a romantic spot.) He’s a schlubby sporting goods store manager, and she’s an uptight closet organizer. Jim — who has three tomboyish daughters named Hilary/“Larry” (Bella Thorne), Espn (Emma Fuhrmann) and Lou (Alyvia Alyn Lind) — and Lauren — who has two teenage sons in the broody/ hormonal Brendan (Braxton Beckham) and the manic Tyler (Kyle Red Silverstein) — go their separate ways determined to never see each other again.

Naturally, there’s no chance of that happening. Through a silly contrivance involving his boss and her best friend (Wendi McLendon-Covey), Jim and Lauren wind up swiping the same South African getaway.  On top of that, they arrive during something called the “Familymoon Week,” which means the two clans have no choice but to stay in the same room and pretended to be one big, happy, blended family.

Let’s not beat around the bush: it doesn’t take much to figure out exactly what’s going to happen in Blended. So it won’t come as a surprise when Jim helps Lauren’s boys with sports and better expressing themselves, while Lauren becomes a much-needed maternal/feminine presence in Jim’s daughters’ lives. (Cue “Larry’s” makeover.) It’s also no spoiler that Jim and Lauren don’t hate each other the entire movie, especially when you consider the actors playing them.

Sandler has been starring in movies for about 20 years, and I don’t think he’s had a better screen partner than Barrymore. The pair has an easy, believable chemistry; she seems to bring out his sweet side, and he seems comfortable/generous enough to let her wring more laughs than usual out of the typical girlfriend/wife role. If you go to the movie’s IMDb page, you’ll see a lot of “Sandlers” in the cast list, and the film also features appearances by regulars like Allen Covert, Kevin Nealon (as a lecherous fellow familymooner), and a surprise Wedding Singer co-star toward the end. Scene-stealer Terry Crews co-stars as Nickens, a flashy, wild-eyed singer who constantly (and inexplicably) pops up and serves as the movie’s Greek African chorus. There are also funny actors like Joel McHale as Lauren’s ex and Shaquille O’Neal as Jim’s co-worker. (Wait, what?!)

Sandler movies have never been known for breaking the comedic mold, which is why I don’t fully understand why he just now seems to be getting tagged for being lazy with his movies. To be fair, Blended really is totally predictable and the humor consistently veers to toward the juvenile. (If you don’t think this movie features a quick shot of two rhinos humping, you don’t know Jim from Adam.) However, there are also enough funny recurring and throwaway gags (Brendan talking about his mom being hot; the hotel concierge played by Abdoulaye NGom repeatedly butchering Jim’s fake last name) to keep things interesting. More importantly, Sandler’s “laziness” here plays more like an appealing ease at being surrounded by people he genuinely enjoys at a wonderfully exotic location.

Blended is presented in an aspect ratio of 1.85:1. The 1080p image is arrived at with an AVC MPEG-4 codec at an average of 26 mbps. This is a bright, blemish-free HD image. Flesh tones are consistently warm and natural throughout. Black levels are solid during a few nighttime scenes (a few dinners and a couples massage), but vibrant colors — especially when it comes to Crews’ gaudy wardrobe — rule the day. I looked for a noticeable jump or change in quality once the action shifted to South Africa. I detected a slightly more golden hue to the proceedings, but otherwise it wasn’t a huge visual upgrade to the already-strong template established during the scenes filmed in Georgia. Cinematographer Julio Macat doesn’t mess around with any funky filters or tricks, making for a solid, straightforward presentation.

The DTS-HD Master 5.1 track is largely here to serve the dialogue and jokes. On those fronts, it succeeds quite well. I was let down, however, by the lack of immersion and general liveliness considering the film’s setting. The rears are primarily used to help pump out the music, which gets a bit of a boost from the subs whenever Nickens and his Thathoo Harmony Group perform. (Thathoo is played by real-life singers Junior Mambazo.) The ambient and atmospheric noises, however, are either too puny or muffled to make much of an impact. This track could’ve been much better than average for a comedy, but winds up being merely serviceable.

All of the bonus material is presented in HD. The special features are plentiful, but certainly a case of quantity over quality.

Safari: (3:13) Footage of Sandler, Crews and other adult members of the cast and crew going on a safari. Naturally, there’s a cutaway of lions humping.

Animals: (3:34) The entire cast, including the kids this time, visit what appears to be the world’s most awesome petting zoo at the Ukutula Lodge & Lion Park in South Africa.

Parasailing: (2:19) There’s really no reason this mini-doc — which covers the scene where Barrymore’s character goes parasailing — couldn’t have been bundled together with the previous two.

Ostriches: (1:51) Not included in the “Animals” featurette because we learn the “ostriches” ridden by Sandler and a young co-star were really stuntmen. It’s actually pretty amusing.

Dick’s Customer Service: (2:27) Bonus footage of Shaq goofing off on set and trying to sink a no-look/over-the-shoulder shot.

Herlihoops — Basketball Actor: (1:06) Writer Tim Herlihy, a frequent Sandler collaborator, shows of the lack of skills that got him cast in a small part in Blended.

Adam and Drew — Back Together Again: (2:21) Not much time is devoted to the decade-in-the-making reunion. We learn they basically decided it was time to reunite on screen after having lunch together one day. There’s also ample footage of them busting each other’s chops.

Bella Thorne’s Makeover: (1:58) The actress takes us through her character’s transformation from Prince Valiant wig to…the more flattering and feminine ‘do and dress Hilary eventually acquires.

Nickens: (1:39) Terry Crews talks about his outlandish character, who he calls the “Tom Jones of Africa.”

Georgia: (2:40) The bits that weren’t shot in South Africa were filmed in Georgia, which occasionally stood in for parts of Africa as well.

Maybe this apparent Sandler fatigue is simpler than we all think. It could just be that movie tickets are too darn expensive for people to shell out good money to drive to the theater and watch a comedy from a guy who openly admits he’s not really trying.

There’s not very much that’s surprising about Blended — although if you squint, you can see some interesting material about the anxiety kids and adults feel trying to accept a new parent/partner — and the movie has a lot of dumb, silly humor. Then again, I was under the impression these were precisely the things people liked about Adam Sandler comedies. If you prefer the sweeter side of Sandler, check this one out.