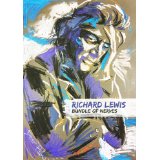 Some of the most iconic stand-up comics of all time have famously wrestled with personal demons while simultaneously mining them for material on stage. Few have done so more successfully — and for a longer period of time — than Richard Lewis. His neurotic, self-flagellating act earned Lewis his “Prince of Pain” nickname, but his longevity is just as impressive. The fact is a lot of great comics don’t last as long as Lewis because they lose that battle with their demons too soon. So it’s great to see that, at age 67, Lewis finally gets his due with a DVD set that covers some of his most seminal work.

The career-spanning Richard Lewis: Bundle of Nerves, now available courtesy of Video Services Corp., offers the full Lewis experience by showing the comedian on stage, on the small screen, headlining a movie, and in his beloved, memorabilia-packed house. Disc One contains 1979’s Diary of a Young Comic and his Magical Misery Tour HBO special from 1997. (Both of those titles are making their DVD debuts.) Disc 2 has the 1995 drama Drunks and House of a Lifetime, a Cribs-style documentary created exclusively for this set. Let’s break them down in the order in which they are presented on this set.

During his quick introduction, Lewis seems very proud of the fact that this micro-budgeted TV movie pre-empted Saturday Night Live when it originally aired on NBC. Lewis stars as Billy Gondola, an East Coast comic who decides to move from New York to Los Angeles against his overbearing Jewish family’s wishes. What Billy finds on the West Coast is an unglamorous, but oddly-intoxicating mixture of artifice and image-obsessed loons. (Billy’s porter at the airport is really an actor; his cabbie is really a composer.) Billy also struggles to find his voice as a comedian.

This is the first extended glimpse we get of Lewis on this set, and it’s quite different from the instantly recognizable stage persona he went on to cultivate. The all-black wardrobe isn’t there yet, and we don’t even get to see him do his jittery brand of comedy until the last few minutes. In fact, Lewis mostly seems content to underplay his smartass straight-man character and leave the outrageousness to actors like Stacy Keach (as a landlord who’s really a stunt man) and Dom DeLuise (in a delightful cameo as a placemat-loving version of himself). Diary of a Young Comic is both silly and stark — there’s a disclaimer at the beginning about the rough picture quality — and an interestingly reflective exercise from a comedian near the start of his career. It takes way too long to get to the very simple lesson that Billy should just be himself on stage, but the value he discovers in authenticity is clearly something Lewis carried into his work.

This show at The Bottom Line nightclub in Greenwich Village marked Lewis’ return to the venue after 20 years. More importantly, Lewis was very early into his recovery from alcohol and drug addiction and he’d challenged himself to do a high-pressure show sober.

I actually remember watching this performance more than a few times when it originally aired, and it offers the classic Lewis persona: hand on his forehead and anxiously pacing the stage, while occasionally stopping to check his notes on a comically long piece of paper. Lewis hits all his trademark topics here, including his hypochondriac tendencies (there’s a great extended riff about public restrooms), aging (he chronicles his battle with ear hair), meeting famous people (Hootie and the Blowfish reference = ’90s alert!) and, of course, being Jewish (and imagining what a Jewish porno would sound like). The show features lots of transgressions and nervous asides, but it’s all part of the (comedy) act and it’s exhilirating to see Lewis in control.

As proud as he was about Diary of a Young Comic pre-empting SNL, Lewis seems even more psyched about the fact that he once headlined a dramatic movie with this impressive of a cast. And you know what? Lewis *should* be proud because he ably and believably carries a film that also features Oscar winners Faye Dunaway, Dianne Wiest, along with actors like Sam Rockwell, Parker Posey, Calista Flockhart, Howard Rollins, and more.

Lewis stars as Jim, who we meet as he brings crappy snacks to an Alcoholics Anonymous meeting. After his sponsor convinces him to speak during a meeting for the first time in seven months, Jim bolts and goes on a self-destructive near bender that pushes him close to the edge. Meanwhile, the rest of the people in the group share their tragicomic stories. (Well, they’re more “tragi” then “comic.”) Although the film gets repetitive in a hurry — monologue at the meeting, cut to Jim, another monologue, check in on Jim again — the acting is exceptional. (Particularly Rollins’ searing speech and Spalding Gray’s amused performance.) Through those monologues, Drunks touches on a variety of obstacles and complex, suffocating emotions alcoholics face. (Anger that they can’t drink; maybe they were just born in the wrong, more judgmental era.) The movie is based on the play “Blackout” by Gary Lennon, but Lewis makes the material feel autobiographical and (yep) authentic.

Throughout the intros on this DVD, Lewis casually dropped the names of his famous friends. (Ringo Starr gave Lewis his blessing on the Magical Misery Tour title; Ron Wood of the Rolling Stones designed the cover art for Bundle of Nerves.) House of a Lifetime is Lewis’ passion for art and artists pumped up to the nth degree. Filmed in August 2013 — and just before he was getting ready to move and significantly pare down his collection — Lewis takes us through his historic Laurel Canyon home stuffed with memorabilia. (The walls on the stairway to the second level appear to be completely covered in framed pictures.)

Lewis said he bought the house with the money he made from Anything But Love (the sitcom he starred in with Jamie Lee Curtis), and filled it souvenirs from friends and people he admires. So there’s autographed memorabilia from buddies like Larry David and David Brenner, but there’s also terrific photos of Miles Davis and Ella Fitzgerald. (One press clipping described Lewis as having the “Soul of a Jazzman.”) There are also impressive pieces of art by the likes of Pedro Friedeberg and Fornasetti, alongside photos of Lewis on the set of Robin Hood: Men in Tights. Just like any real-life friend who ropes you into looking at his stuff, the material here isn’t quite as interesting to us as it is to the person who owns it. However, the combination of reverence and eccentricity in Lewis’ collection nicely reflects the guy showing the stuff off.

Richard Lewis: Bundle of Nerves clocks in at 269 minutes and also includes commentary tracks for Diary of a Young Comic (Lewis and co-writer Bennett Tramer) and Drunks (Lewis and director Peter Cohn). Lewis — looking somewhat more haggard, but as energetic as ever — appears before each presentation for brief and illuminating introductions. He speaks with equal parts amazement and pride about his 47-year career. If you’re not at all familiar with that career, Bundle of Nerves is a marvelous way to get acquainted. But if you are familiar with his work, I can assure you this isn’t the DVD from hell.