Posted in: Disc Reviews by Gino Sassani on September 10th, 2014 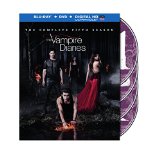 And my how things have changed in Mystic Falls. Elena is a vampire, and Katherine is now a human, and doing a pitiful job of that, to be sure. Bonnie is a ghost who only Jeremy can see, and they’re trying to keep it all a big secret from everyone so they all think Bonnie is out globe-hopping and having a great time. Stefan is at the bottom of a lake in a safe where everyone else thinks Silas is. He’s drowning, dying and then waking up again and again and again. In between he’s hallucinating conversations with Damon and Elena. Meanwhile those two are hitting the sheets together again and again and again. All the while big bad from last season Silas is masquerading as Stefan. Turns out that’s his true form, and this season is going to make you sick and tired of the whole doppelganger thing. That is, if you weren’t already. Yes, it’s been quite a long summer, but it’s time to head back to Mystic Falls once again.

What is Mystic Falls? Who the heck are Damon and Elena, you ask? Silas? You’ve got questions. We’ve got answers, but not here. You’ve heard me say this before, and it’s become more and more true of television shows these days. If you don’t know what I’m talking about, you’re just not ready for season 5 of The Vampire Diaries. But you are in luck. You can check out my reviews for the four previous seasons here: Vampire Diaries Reviews. Then you can pick them up and start a mega-marathon session. Once you’re up to speed, join us back here for the next thrilling installment.

Of course, the big news on Vampire Diaries isn’t really about Vampire Diaries. The likes of Klaus, Rebekah and Elijah have left for New Orleans and their own show called The Originals. It’s really a big loss for this show, because with those characters leave Joe Morgan, Claire Holt and Daniele Gillies, who play these characters respectively. The result is a Vampire Diaries that dips a little in quality and a spin-off series that is better than the original from whence it was sired. I suspect it’s a debatable opinion, one that likely has those forums so hot you’ll need asbestos screens to get through it all. This is my take. Your mileage may vary.

“If I hear the word doppelganger one more time I’m gonna have to learn how to spell it.”

There’s not so much one big bad this year. We’re introduced to a new kind of supernatural being called a Traveler. These guys hitch a ride inside of other people, where they are also called Passengers. They are a kind of witch that has been cursed to wander without the ability to settle down. They’ve decided to make Mystic Falls there new homeland and intend to undo all other magic. The bad news here is that it means all supernatural beings in the ground-zero zone will die. Naturally, this is bad for our heroes and becomes their major fight. It’s very Invasion Of The Body Snatchers, because you never really know who is inside of whose body. Combine that with a lot more doppelganger action, and this season gives new meaning to the “Trust No One” motto.

The season also deals with a place called The Other Side. This is a limbo where supernatural beings go. Bonnie ends up having to become the anchor for this place. That means whenever a vampire, werewolf, witch or other creature dies, they pass through her to this other side. But the spell will break it down, and while no one really explains exactly what that means or what it will do, we’re left with the idea that it’s not good for the beings there.

It’s a pretty good story arc, but the writers seem to have a problem filling out the stories. We keep getting various side-trips that really have nothing to do with the coming conflict. Elena and Carolyn are now in college, but sometimes it’s Katherine in Elena’s body and no one really notices. The season just does too much with musical bodies between Katherine’s ride in Elena, Passengers and Doppelgangers, I got to the point where I just stopped caring who was really who. The writers relied too many times on the “Fooled ya. It was really <fill in the blank>”. When the writers get really stuck they send our characters to another party. I think Damon drinks more bourbon than blood.

There’s the introduction of the secret Augustine society and its mad scientist Wes who wants to spread a virus to kill all vampires. Damon once spent five years as an unwilling test subject there, and we end up with another whole story that sort of shows up between the big arcs. It’s all too ambitious and maybe should have played out as a few several-story arcs that would complete before moving on to the next. The result is a season that feels aimless and seriously missing the talents of the departed Originals family.

That didn’t have to be the case. Ian Somerhalder continues to be a standout actor. But, honestly, he appears a little out of place sometimes. I get the sense even the actors thought we were flailing around a bit too unfocused this season. Candice Accola steps up her game in the acting department. I’m finally liking Carolyn. She’s been the airhead and perky blonde of the series for so long I had lost all hope. The character truly matures this season, and Accola brings an A game I didn’t know she had. She certainly steals every scene she’s in this season. Props to her for managing to get the more consistent story and material she could obviously sink her teeth into, pun intended. I’m looking forward to even more development of that character, to be sure.

The other maturing character is Jeremy. Steven R. McQueen gets to also settle down and stop being the immature stud of the group. His relationship with Bonnie and her death issues make him much more serious, and McQueen delivers on the opportunity.

The show’s finale mixes up the cast a bit. You see, as the heroes try to fight the Travelers, they have hopes of bringing back some dead people through Bonnie. Needless to say, a few characters die this season with hope that some will return. The final scene basically resets some of the cast, bringing back an old favorite and taking away a couple. I’m not sold it will hold. One of those takeaways will certainly be back somehow…at least I hope so.

When season 4 ended with Elena becoming a vampire, I had hoped that most of season 5 we’d see her adjustment to the new life. Sadly, we don’t see any of that. It’s like we just skipped over the elephant in the room. I have to believe that fans were looking forward to that. Nina Dobrev gets to act out many characters again, and I’m sure that was fun to do. Again she gets to stretch her chops a little. Even Paul Wesley gets to play the multi-character thing this season. It might be fun if there just wasn’t so much of it.

The show reaches that important 100-episode milestone early in the season. We get to see a lot of old faces for this one, and I think it will bring a smile to the fans’ faces as some of those we’ve lost along the way give brief appearances. It also means we’ll see The Vampire Diaries eventually in syndication. Can you imagine watching it daily at 4:00 on a local channel? You soon won’t have to.

Comic Con 2013: (30:29) The crowds at these things get wilder each year. The cast and crew really feed off the energy as this panel gets us ready for the fifth season.

I Know What You Did The Last 100 Episodes: (10:15) It’s a celebration of 100 episodes with cast and crew having some fun and sharing their favorite moments. There’s also a quiz.

To The Other Side And Back: (10:35) A rundown on what The Other Side is. Cast and crew offer their own personal thoughts and experiences with ghosts.

A Day In The Afterlife With Kat Graham: (7:02) This is one of those journal features where we follow the actress through hair and makeup and around the set for a typical day.

Even a bad year of The Vampire Diaries has some good things going for it. The production values haven’t slipped even if the writing has. The actors all did the best with what they had and never gave up on the material no matter how far astray it drifted. It was a frustrating year made more so by the spinoff losses. Let’s hope that with this distraction gone the show can refocus and pull itself again into tighter storytelling. If not, it will be gone before The Originals even gains its stride. Hopefully, both will be here a while. “There’s plenty of room for two.”

Gino Sassani is a member of the Southeastern Film Critic's Association (SEFCA). He is a film and television critic based in Tampa, Florida. He's also the Senior Editor here at Upcomingdiscs. Gino started reviewing films in the early 1990's as a segment of his local television show Focus. He's an award-winning recording artist for Omega Records. Gino is currently working on his 8th album Merchants & Mercenaries. Gino took over Upcomingdiscs Dec 1, 2008. He works out of a home theater he calls The Reel World. Favorite films: The Godfather, The Godfather Part II, The Body Snatcher (Val Lewton film with Karloff and Lugosi, not the pod people film), Unforgiven, Gladiator, The Lion King, Jaws, Son Of Frankenstein, The Good, The Bad And The Ugly, and Monsters, Inc.
Captain America: The Winter Soldier (Blu-ray) Richard Lewis: Bundle of Nerves