Posted in: Disc Reviews by Gino Sassani on September 11th, 2014 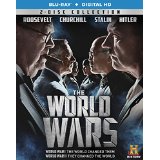 “One must regard the 30 years of strife, turmoil and suffering in Europe as part of one story. One story of a 30 years war.” – Winston Churchill

He was exactly correct, and one of only a few people of the time who had the vision to understand that concept. Before the end of World War II the first world war was known as The Great War. The idea of two separate world wars came later. I can foresee a day when history will once again change its perspective and refer to the entire period as The Great War. It’s the tactic that this History mini-series has taken.

More precisely, the series follows the great leaders that shaped the second war and follows their careers, each of which began with the earlier conflict. All of the players had roles in WW I, and it certainly shaped their views and ultimate actions. For Hitler it was an obsessive hatred of the idea of a German surrender. FDR and Churchill were ministers/secretaries of their nations naval forces in WW I. For Churchill the second war was about redemption from the terrible defeat which caused his resignation in that first war. For Stalin the first war was a revolution in his country that would lead to one of the most brutal dictatorships in world history. Truth be told, Stalin made Hitler look like Mother Teresa.

In that same period another 100 million died from the flu epidemic, and at least half that number would die in Stalin’s march to build the Soviet Union out of Lenin’s Russian Revolution. In just 30 years Europe lost nearly an entire generation in its nearly 300 million deaths. That’s as many people as currently live in the entire United States today.

The miniseries is divided into three parts. Each run about 90 minutes and likely accounted for two hours of television.

Trial By Fire depicts the events that sparked WW I and covered that war’s major events.

A Rising Threat covers the ramifications of the Treaty of Versailles and the rise of Hitler in Germany determined to overturn that treaty. It covers the start of the second world war leading up to the attack on America.

Never Surrender begins with the bombing of Pearl Harbor and the United States entry into the war. The war’s major events are covered and finally there is an examination of the settling of 30 years worth of dust and the impact it all had on the years after.

The episodes pretty much play out with the same formula. There are many dramatic re-enactments of the major players: Hitler, FDR, Patton, Macarthur, Stalin, Churchill, Truman and Chamberlain. It almost plays out as if it was a film, but it is narrated by Jeremy Renner and doesn’t feature a ton of dialog. Most of the performances consist of dramatic poses and close-ups of determined faces. The production values are certainly much higher than the typical documentary reenactments, but the drama is never given enough time to establish any real rhythm or tempo of its own.

The episodes show themselves more as documentaries with the various talking heads that provide the insight and analytical content. These include professors, news personalities like Tom Brokaw, and real-life Prime Ministers (John Major) and secretaries of defense (Colin Powell and Rumsfeld). John McCain is also a frequent contributor to these analyses. There are also computer-generated diagrams and battle reenactments. All of this is interwoven with some actual vintage footage and photographs to make this quite the multimedia event.

Of the actors there was one standout. Hugh Scully plays the adult Adolph Hitler. He gets to do many of these intimidating poses, and he is quite electric in these shots. He manages to convey the Hitler we all have seen over and over in archive footage, but he brings him to life in a way even these old reels of the man himself never could. Look into those steely eyes and you get a feel of the terrible evil behind them. It’s quite a startling effect that takes a little getting used to. Rarely have I seen an historical figure played so convincingly by doing so little.

There are things to be learned even by the most avid of history students. If the depiction is indeed true, it’s fascinating to see how Hitler’s infamous short mustache evolved. It’s also amazing just how many times Hitler narrowly escaped death on the front lines of that first war. A British pilot had him weak and directly in his sights but later explained that he could not bring himself to pull the trigger. Add these events to his penchant for escaping harm during his reign of terror, and it’s easy to see why so many people believed he was immortal. It appears that Patton was the first one to strap a weapon to a motor vehicle, and he participated in the world’s first drive-by in WW I.

It’s all a unique combination that provides a look at this idea of one conflict by telling the individual stories among the world events. It’s a compelling mini-series that deserves a spot on your video shelf. It’s more family-appropriate than most, because there is little of the mangled bodies on the battlefield. These stark images are pretty much reserved for the Jewish death camps. D-Day is particularly cleansed, with almost no evidence of the carnage we’ve witnessed in more graphic documentaries.

Each episode is presented in its original aspect ratio of 1.78:1. The 1080p image is arrived at with an AVC MPEG-4 codec at an impressive average of 35-40 mbps. The high-definition image presentation tries to do a number of things which result in different experiences in quality. The drama and talking heads material is sharp and as detailed as you could ever want or expect. The vintage footage is, of course, quite damaged and shows its age. The computer-generated material has that dead/glassy look that offers detail but no real texture. It’s presented pretty much exactly as it was constructed.

The DTS-HD Master Audio 5.1 is mostly narration and limited dialog. There are a few battle sounds, but the series wasn’t constructed as an action piece. Don’t expect an aggressive campaign here. But it does exactly what it is supposed to do.

Characters In Depth: (25:40) This feature has a short mini-biography on Churchill, Stalin, Hitler, Truman, FDR and Eisenhower. There is a play-all option.

Featurettes: (32:38) There are 10 parts with a handy play-all. These cover various events and production designs and serve as accented information.

Deleted Scenes: There is about an hour in all. You have to select from each of the three parts, but there is no individual scene selection. They mostly include historical figures left out of the main story.

The World Wars offer us more than just a look at a terrible time in human history. For those who might listen, they offer a warning for the future. Appeasement never really works, and it was this policy toward Hitler that led to global death and destruction as well as genocide. Fortunately, there were a few who saw the dangers in time. “The World Wars were a time of ruthless tyrants but also legendary heroes. An era when a single generation of men determined the fate of all mankind.”

Gino Sassani is a member of the Southeastern Film Critic's Association (SEFCA). He is a film and television critic based in Tampa, Florida. He's also the Senior Editor here at Upcomingdiscs. Gino started reviewing films in the early 1990's as a segment of his local television show Focus. He's an award-winning recording artist for Omega Records. Gino is currently working on his 8th album Merchants & Mercenaries. Gino took over Upcomingdiscs Dec 1, 2008. He works out of a home theater he calls The Reel World. Favorite films: The Godfather, The Godfather Part II, The Body Snatcher (Val Lewton film with Karloff and Lugosi, not the pod people film), Unforgiven, Gladiator, The Lion King, Jaws, Son Of Frankenstein, The Good, The Bad And The Ugly, and Monsters, Inc.
Richard Lewis: Bundle of Nerves Supernatural: Season 9 (Blu-ray)