Posted in: Disc Reviews by Gino Sassani on September 12th, 2014 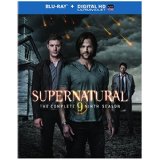 “There’s virtually nothing the Winchesters can’t do if they work together.”

But that’s the rub, isn’t it? The tradition has been that each of the last several seasons end up beginning with the brothers separated for one reason or another. Often one of them is trying to escape Hell, purgatory or some fantasy mental land. There are at least two times a year they split up over an argument. But the truth is that they know just as the fans do that when the chips are down and there’s an apocalypse around the corner, these guys are going to come together and kick some evil behind. Like that old energizer bunny, they just keep going and going and going. It’s been nine years now, and the boys are about to enter a tenth season on the CW. With no end in sight, it’s time to look at the ninth season of Supernatural.

“This one goes out to any angels with your ears on. This is Dean Winchester, and I need your help.”

As I’ve already mentioned, once again the boys start the season apart. Sam is dying from his attempt to complete the trials and close the gates of Hell. He’s in a coma, and Dean broadcasts a message over Angel Radio. He wants someone to heal Sam. What he gets is an offer from an angel to possess Sam and heal him from the inside. He can’t tell Sam about it or he’ll reject the angel, and it doesn’t require a spoiler alert to tell you that this thing is going to backfire. It will also stretch belief more than once as Sam almost catches on and Dean has to come up with a quick cover story. I think the writers let us down a bit here. Sam knows his brother better than that. And we’re smarter than to believe it.

The big story for season nine is the repercussions of blowing up Heaven. The angels have all fallen to Earth. For some it’s a new start. Most want to get back into Heaven, and nearly all of them blame Castiel, who is now a normal human without his grace on. Angels are hunting him, and the boys as they begin to form factions, and it looks like it’s going to lead to an all-out angel war on Earth.

Megatron wants to become the new God and has amassed a pretty good army to make it happen. Of course, there’s a lot of deceit going on here, and he’s played almost for comic relief this season. I don’t know if it was intentional to make him so silly, but it took away the feeling of danger when the final confrontation went down. Again, I think the writers got lazy here and went for some cheap smiles.

The best stuff in the show doesn’t involve the brothers at all. Crowley is dealing with his touch of humanity and spends half the season as the brothers’ captive. Mark Sheppard is a highlight of the season. His performance makes Crowley hands down the most interesting character to be on the show since Bobby died. Then there’s human Castiel which, once again, provides tons of opportunities for Misha Collins to show his wonderful talents. Bobby does get a brief return, but I miss the heck out of both the actor and the character. Jared Padalecki has had to play several versions of Sam over the years. Credit the actor for allowing us to see those subtle differences. This season is no exception. Sam has become far more multidimensional than Dean. Yes, he gets the Mark of Cain this season which makes him a little angry and bloodthirsty, but really, that’s just normal Dean on steroids.

The season was not nearly as focused on the big issue as it has been recently. There were far more filler/sidetrack episodes, and some of those were a bit silly. Dorothy turns out to have hung out with the men of letters, and the boys end up opening a portal to Oz where she brings the Wicked Witch looking for a way to kill her. Dean ends up talking to a German shepherd in Dog Dean Afternoon. The dog’s the only witness to a couple of supernatural murders, and a spell not only allows Dean to talk to the dog but other animals as well. The downside is that he begins to take on aspects of being a dog. Credit Ackles for doing a pretty nice job of it, but it’s really too silly to believe. The show went that way too often, and I have to say this season just wasn’t as scary as the show’s been. I hope to see a return to those days soon. We learn more about Dean’s childhood in Bad Boys. He was at a farm for juvenile delinquents, and now the guy who ran the place needs help from the Winchesters when the place appears to be haunted. Dean also gets to meet one of his favorite porn stars in of all places a church chastity group.

The best side-trips involve Crowley teaming with the boys to defeat his rival Abaddon, played by Alaina Huffman. With Crowley literally tied up with the brothers, she makes a move to take over Hell. It’s a case of the enemy of my enemy making for strange bedfellows. It also leads to Dean getting the Mark of Cain, which allows him to also win the day in the end, but at what price. It’s no secret that the end will find the brothers separated once again for the beginning of season 10.

The bunker is still here, and I have a bit of a love/hate relationship going on. It’s a very cool place, and it opens the show up to so many new possibilities. It also appears to make the writers a little lazy. They lean on it for respite and safety a bit too much. I also don’t like the use of a sudden find in the bunker solving our problems.

Finally, there was a back-door pilot this season. Bloodlines was intended to open up a new series that did not ultimately get picked up. It was a bit of a strange idea. It was Chicago and five families of supernatural creatures running the town. Dean best describes it as The Godfather with fangs. It’s also a little too much like The Originals, which spun off from The Vampire Diaries this season. They also had a tribunal of factions representing the various creatures, albeit not as crime families. I suspect the idea will be tried again and we’ll see another concept emerge as a back-door pilot within the next two seasons.

Each episode of Supernatural is presented in a 1.78:1 aspect ratio. The 1080p image is brought to you through a AVC/MPEG-4 codec. As you might expect, this show is dark in more than just its nature. Much of the action occurs at night, so black levels need to be spot-on, or any detail can be quickly washed away like blood pools in a hurricane. Supernatural delivers with great shadow definition and deep levels of black. I’ve seen the broadcast HD versions, and these are even better. What is remarkable about the colors is that they manage to hold on to such fine definition even under intense low-light filming conditions. There is nothing about this transfer that will keep you from enjoying the best horror series since Kolchak. The flashback scenes for Sam are filtered through a very soft light that destaturates the color and looks warm. Dean’s flashbacks are cold and stark in contrast.

Supernatural’s is presented in DTS-HD Master Audio 5.1 track. The show just comes alive so much better in the uncompressed audio. Subs make themselves heard, and the rest of the show retains the quality we’ve had in previous releases. Certainly dialog comes through just fine. There is some rather aggressive use of surrounds on rare occasions. Sadly, there’s less and less classic rock on this show and I miss it.

Men Of Letters Interactive Experience: You can explore the bunker and unlock features.

Behind The Scenes – A Fan’s Perspective: (18:26) This one is a lot of fun. It’s basically a mockumentary where Misha Collins gives a tour of the production to a “lucky fan” who won it as a prize. The cast and crew really play up some pokes at themselves, and Misha’s such a good sport.

Comic Con 2013: (28:51) These visits get to be a mainstay on these Warner features. They’re a ton of fun and get to show how much enthusiasm these fans have for these shows.

This series wasn’t at its best this year. It’s still a quality genre show, but it’s lost its edge. It used to be a lot more scary. I don’t know if the show’s run out of scares or we’ve become more jaded. Nine years is a long time for a show to run. The character moments are still golden and keep even seasons like this worth watching. They celebrated 200 episodes this season, and that’s something to brag about. But this is no time to sit on one’s laurels. The show once had a hard edge that helped it get to 200 episodes. “But that was then; this is now.”

Gino Sassani is a member of the Southeastern Film Critic's Association (SEFCA). He is a film and television critic based in Tampa, Florida. He's also the Senior Editor here at Upcomingdiscs. Gino started reviewing films in the early 1990's as a segment of his local television show Focus. He's an award-winning recording artist for Omega Records. Gino is currently working on his 8th album Merchants & Mercenaries. Gino took over Upcomingdiscs Dec 1, 2008. He works out of a home theater he calls The Reel World. Favorite films: The Godfather, The Godfather Part II, The Body Snatcher (Val Lewton film with Karloff and Lugosi, not the pod people film), Unforgiven, Gladiator, The Lion King, Jaws, Son Of Frankenstein, The Good, The Bad And The Ugly, and Monsters, Inc.
The World Wars (Blu-ray) Monika