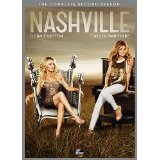 If you’ve ever asked someone, “What kind of music do you listen to?”, chances are you’ve heard the phrase, “I like everything…except country.” By that logic, a significant portion of TV viewers automatically dismissed ABC’s Nashville when it premiered two years ago. The flawed, entertaining musical drama has deservedly made it to a third season, which kicked off a few weeks ago. However, I think it’s useful to revisit Nashville‘s sophomore season. This set of episodes significantly re-calibrated the series — not always for the better — and marked the start of a shift toward the version of the show that is currently on the air.

Nashville was originally presented as the tale of dueling divas Rayna James (Connie Britton) and Juliette Barnes (Hayden Panettiere). Rayna was the established superstar struggling to stay relevant in a shifting musical landscape, while Juliette was the brash, bitchy (but insecure) flavor of the moment who was burning up the charts. But it was a different pair — Clare Bowen’s fragile, ethereal Scarlett O’Connor, and Sam Palladio’s affable Gunnar Scott — who arguably swiped the spotlight during the series premiere with their stunning “If I Didn’t Know Better” duet.

The rest of Nashville‘s inaugural season expanded beyond Rayna vs. Juliette to explore the lives of Scarlett, Gunnar and other musicians who ranged from self-destructive veterans like Rayna’s long-time lead guitarist/former lover Deacon Claybourne (Charles Esten) to talented, conceited up-and-comers like Avery Barkley (Jonathan Jackson). Unfortunately, the rest of season 1 also expanded to include a tedious mayoral race involving Rayna’s husband Teddy Conrad (Eric Close) and the political machinations of Rayna’s domineering father Lamar Wyatt (Powers Boothe). The finale veered head-on into soap opera territory thanks to a surprise proposal, a surprise pregnancy, and a serious car accident involving two of the show’s major characters.

For better or worse, Nashville decided to double down on the soapy drama for season 2. (If you ask former executive music producer T-Bone Burnett — who is also the husband of Nashville creator Callie Khouri — he’ll probably tell you it was a change for the worse.) The good news is the show’s momentum-killing political storylines were excised. I wasn’t opposed to the idea of Nashville exploring local politics; after all, the series is called Nashville, not Music City. The problem was always that the writers failed to make any of this stuff even remotely interesting. The bad news is the show was forced to drop talented performers like Boothe and The Wire‘s Robert Wisdom, who played a political rival of Teddy and Lamar’s. Then again, the better news is that Nashville also got rid of thoroughly annoying characters like Kimberly Williams-Paisley’s horrible Peggy Kentor.

Those departures opened the door for a number of cast additions, most of which were very effective. The best decision was bumping Chris Carmack, who plays closeted cowboy singer Will Lexington, up to a series regular. Some of his material is melodramatic, especially whenever Will has to pine or clash with a gay record label exec (Derek Kranz). But Will’s searing conflict between achieving his lifelong dream of country music superstardom and living a lie is vividly realized. (Even if it’s not subtle.) I also enjoyed Aubrey Peeples as Layla Grant, a cutthroat reality show upstart who makes Juliette feel like Rayna did in season 1. Nashville also conjured a childhood bestie of Scarlett’s named Zoey (Chaley Rose), who moves to the city for support. Considering that Zoey ends up falling for Gunnar (Scarlett’s ex) and Scarlett experiences a season-long meltdown when she’s faced with the pressures of recording an album and performing live, I’d say Zoey failed spectacularly as a best friend.

Then again, you can’t really blame Zoey for being distracted since practically everyone with a pulse was hooking up with someone else during Nashville‘s second season. I mean, even Deacon’s lawyer (played by Christina Chang) hooked up with two male regulars! Some of the pairings led to interesting plot developments, like Juliette’s affair with a rich married man making her a pariah within the country music industry. (The Emmys continue to ignore Panettiere’s funny, affecting, convincing work here.) Meanwhile, Rayna starts flirting with charismatic fellow superstar Luke Wheeler (Will Chase), who happens to be the biggest artist on the label run by Rayna’s new nemesis Jeff Fordham (Oliver Hudson). Hudson is spectacularly jerky as the bottom-line obsessed Jeff, who revels in his attempts to crush Rayna’s burgeoning label. (The only thing missing is a mustache for the actor to twirl.) He’s so bad that he eventually drives Rayna and Juliette to team up! (Both Chase and Hudson were promoted to series regulars for season 3.) Other season 2 guest stars included musicians Zac Brown, Brad Paisley, Kellie Pickler, and Kelly Clarkson playing themselves.

The soapy antics threatened to overtake the terrific songs as the stars of the show. But despite Burnett’s departure prior to season 2, that didn’t happen. Buddy Miller — who worked alongside Burnett in season 1 — stepped in as music supervisor and delivered a number of memorable tunes. My favorites include Will and Rayna’s playful “Ball and Chain”, Avery, Gunnar and Zoey’s toe-tapping “I Ain’t Leaving Without Your Love”, Scarlett’s devastating “Black Roses”, and Juliette’s defiant “Don’t Put Dirt on My Grave Just Yet.” Some of those songs — and a few others — are featured in Nashville: On the Record, a music special that aired in the show’s regular time slot during season 2. It featured a behind-the-scenes look at the songwriting process along with live performances from the actors. (Panettiere was particularly nervous about singing in front of an audience.)

Nashville: The Complete Second Season features all 22 episodes on five discs. All of the bonus material is on Disc 5. In addition to On the Record, there are bloopers and deleted scenes. Season 2 alternated between occasionally frustrating (the “surprise” pregnancy from the previous finale turned out to be fake; we were supposed to believe Rayna losing her voice early on was anything other than a temporary setback) to fascinating (watching Deacon try to build a relationship with his newly-discovered biological daughter while embarking on a solo career after many years in Rayna’s shadow).

So far, season 3 seems like more of the same: the main thrust so far is Rayna trying to choose between Luke and Deacon; also, Panettiere’s real-life pregnancy has been written into the show. If Nashville ever aspired to be a realistic drama about the lives of musicians, it’s simply on the wrong network. (ABC is Shondaland!) To me, the show is at its most compulsively watchable when it merely dips its toes into soap opera territory. More importantly, Nashville should always remember to mix in plenty of recording industry “inside baseball” and (of course) killer music.