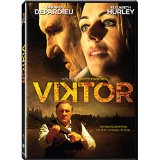 We can blame thank Liam Neeson — or “Liam Neesons” — for this recent run of action movies about men of a certain age who tear their way through some part of Europe in the name of their missing or dead children. Viktor — a French/Russian production starring Gerard Depardieu and Elizabeth Hurley — is one of these latest Taken take-offs. Unfortunately, it’s also one of the more inert revenge films you’re likely to see.

It’s a shame because the movie has a lovely, kinetic opening credits sequence featuring a Chechen dance rehearsal. (The sequence is paid off quite nicely at the very end.) Shortly after that opening, we meet Viktor Lambert (Gerard Depardieu) a French art thief who has just finished serving a seven-year prison sentence. Just before getting out, his son Jeremie (Jean Baptiste Fillon) is killed. Viktor arrives in Moscow — where Jeremie was doing work for a diamond smuggler named Anton Belinsky (Denis Karasyov) — looking for answers.

He has a couple of allies in Soulimann (Eli Danker), the ballet choreographer who had taken care of Jeremie when his father went to prison, and Alexandra (Hurley), the owner of a swanky club who is a former flame of Viktor’s. There’s also Katerina (Polina Kuzminskaya), the artist who broke up with Jeremie the day before he was murdered.

It’s a pretty straightforward story and film, with the only deviation being a largely useless subplot involving a detective (Evgeniya Akhremenko) who futilely tries to keep taps on Viktor. The most successful flourishes from director Philippe Martinez involve anything that highlights the film’s real-life Russian locations. Martinez also devises a brief, violent two-man denouement in a solitary field that packs more of a wallop than any of the gunshots or explosions in the preceding 90 or so minutes.

It doesn’t help that Viktor’s singular mission — find his son’s killer — doesn’t wind up being so singular after all. The scenes where Viktor reconnects with Alexandra feature some of the few moments in the film that actually crackle, due largely to the twinkle Hurley brings to her performance. It made me wish the character had wound up being more essential to the story. The rest of the cast — particularly Karasyov as the mumbly, vaguely-menacing bad guy — don’t make much of a lasting impact.

Viktor also can’t seem to decide what sort of avenging angel its title character should be. For example, if Viktor only cares about bringing down his son’s killers, why does he calmly sit down and enjoy a full meal before proceeding to torture a bad guy for information. If Martinez wanted his hero to be this sadistic, he should’ve gone all in. Instead, it feels like a glaring false note, just like the ridiculous, over-the-top car chase halfway through the film and silly climactic shootout that belongs in a steroidal action movie from the ‘80s; both of those sequences clash with the sophisticated, noir-ish vibe Martinez seems to be going for the rest of the time.

Eventually, Viktor is faced with the choice of continuing his violent mission or accepting a more peaceful/less satisfying resolution for the sake of his remaining family. But there’s never really a question — or any drama — as to which path he’ll follow.

Things might have been different with a more spirited lead performance. Depardieu is no one’s idea of a lean, mean action star, but he’s still an imposing screen presence at age 66. So I held out hope that he’d be able to pull off the part of the burly, bruising title character. Instead, the actor looks perpetually uncomfortable in Viktor’s three-piece suits. Depardieu also seems only intermittently interested in what’s going on in the story as Viktor dispassionately and methodically tracks down each lead. Unfortunately, “dispassionately and methodically” is how too much of Viktor plays out.