Posted in: Disc Reviews by Archive Authors on January 20th, 2015 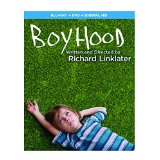 Boyhood is all the rage right now. With all the hoopla surrounding the film, it should be noted that it is ordinary. It is just about people living their lives. One could even call it boring. One can say that because life is boring. It is not as exciting as it is in the movies. Life is about small moments that add up to memories and then it is over. Boyhood doesn’t make grand statements about boyhood, or about motherhood or fatherhood for that matter. It is just about a few people and what happens to them. One could say it’s about nothing, or one could say it’s about everything. The film is nearly three hours long. It was filmed for a few weeks a year over twelve years. It is a very personal project for its writer/director, Richard Linklater.

I don’t like Boyhood because it is messy and unfocused. I love Boyhood because it focuses on all the small moments and makes them seem all so important at the moment they happen. I love Boyhood because it makes us look back on our own lives. I don’t like Boyhood because it makes it seem like all life is boring. I like Boyhood because it is unassuming in it’s efforts to show us a mirror of ourselves. One could say, I’m conflicted about Boyhood. I can say I love many Richard Linklater films; in fact, I like every one of them. And they are not all the same, but they have one thing in common. None of them are pretentious, and that was after seeing his last film Before Midnight which delved precariously into highfaluting and high-minded bouts of conversation. In fact, Linklater has always been on his own path down in Texas. It was a slacker path, since that was the name of his first film. He was always an indie guy but had big successes over the years like School of Rock, Bad News Bears and Dazed and Confused. But the films that most closely tie to Boyhood are the trilogy of films Before Sunrise, Before Sunset, and Before Midnight. Those three films starred Ethan Hawke, detailing conversations with one woman (Julie Delpy) over the years. The trilogy was filmed in 1995, 2004 and 2013. Boyhood began filming in May 2002 and also starring Ethan Hawke, but the real star is Ellar Coltrane who ages from 6 to 18 in the film.

Lorelei Linklater, the director’s daughter, plays Ellar’s older sister, and one gets the sense that she outgrew the process by the end of filming. The reason she got bored is because the experiment Linklater conducted was so foreign to common sense that it might have been hard to fathom for his daughter. Is this how you make a movie? Linklater’s daughter must have thought this link a grandiose home video, but Boyhood is more a low-key, unassuming, and preposterously simple magnum opus. It is an epic about small lives. If you go to movies to see something bigger and more exciting than your own life, then Boyhood is not for you. The two movie stars in the movie, Ethan Hawke and Patricia Arquette, come off as smaller than their big screen personas. It is like scripted cinema verite. It is like scripted real life. It is something big that tries at every turn to limit its reach. The project ambled along over the years just recording small moments knowing that the cumulative effect would be different than anything audiences had ever seen before.

My personal feeling is that film will not speak to everyone. Many people will find it too uneventful.

Maybe I don’t give much credit to most people.

Boyhood is presented in its original aspect ratio of 1.78:1. The 1080p image is arrived at with an AVC MPEG-4 codec at an average 25 mbps. You must understand that this film was made over 12 years. The equipment and conditions changed during that time. What you see is more than the changes and development of the boy but of image quality as well. The film begins with colors and sharpness that aren’t as impressive. By the end you begin to see reference and brilliant colors with razor edge sharpness. It’s likely an unintended benefit to the film, but the changes do a rather splendid job of reinforcing the idea that time is passing here. That’s not to say it’s so dramatic that it starts out badly and improves. It’s a subtle change, but there just the same. There’s a nice element of grain at times that harkens back to when films were…well… film.  Black levels are average with no wonderful inky blacks, but it’s really not a huge factor in this film. Linklater talks about keeping it consistent. He has to know that was impossible, and it shouldn’t have been. It does appear cohesive as a single film, however. Perhaps that is really what he meant to say.

The DTS-HD Master Audio 5.1 is mostly there to serve the dialog. There isn’t an aggressive surround mix here, and what would be the point? There are a few important musical numbers and source music that get fine reproduction here. The sub isn’t going to be shaking anyone’s windows, but once again, what’s the point for a film like this?

The 12 Year Project: (19:11) Interviews with cast and crew span the entire 12-year run of the production. Often cast members will interview other cast members, and it’s interesting to see the perspectives evolve. There’s plenty of behind-the-scenes footage, again from throughout the 12-year span. It’s such an unusual project that this ends up being quite an unusual feature.

Q&A With Richard Linklater And The Cast: (52:38) The setting is the Cinefamily Screening of the film in L.A. on June 15th 2014. Cast and crew then gather for the Q&A for the audience after they’ve screened the film.

I can summarize the three-hour film. A divorced mom tries to raise two kids. Their amiable dad comes into their lives from time to time. The mom marries and divorces a couple more times. The kids grow up and get on with their lives.

That summary is meant to convey what to expect from Boyhood. It has gotten so many accolades that the average person might see it and say, “Is that all there is?” That’s kind of the point. That really is all there is. The mother in the film echoes that same sentiment. Life goes by so fast, and then it’s over. In Boyhood, we see 12 years go by in three hours, and we get to really feel how fast life goes by.