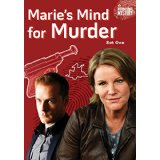 “I see the crime a bit differently.”

American television hasn’t quite cornered the worldwide market on unconventional, endearingly quirky investigators. MHz Networks has just released a hearty helping of German cop drama in the form of Marie’s Mind for Murder. Despite the violent crimes being investigated, the show would’ve fit snugly alongside lighthearted whodunnits like USA Network’s Monk or Psych. You get to sample plenty of Murder with this DVD set, considering there are 10 episodes that each clock in at a shade under 90 minutes.

When we meet Inspector Marie Brand (Mariele Millowitsch), she is working for the Cologne Police Department’s Burglary Division. The first episode (“Marie and the Perils of Greed”) gives us a bit of Marie’s back story, which includes the on-duty death of her policeman father. After filling in for a colleague at a crime scene, she is thrust into a murder investigation and immediately clashes with younger, self-involved homicide detective Jurgen Simmel (Hinnerk Schonemann), who also fancies himself a ladies’ man. It’s no spoiler to say Brand and Simmel wind up catching the killer in that first episode and form a partnership that lasts the duration of this DVD set. In fact, there’s really not much at all I can spoil about this show, given that the cases play out in much the same way they did when they were being solved by the likes of Columbo and Jessica Fletcher.

The Murder, She Wrote heroine is probably the closest doppelganger for Marie Brand. Even though, Brand is a full-fledged officer of the law, she largely relies on her intellect, disarming charm, and heightened powers of observation while letting Simmel do the dirty police work. (And it *is* dirty work; Simmel seems to have at least one foot chase per case, and he suffers multiple cuts, bruises, black eyes and even a broken leg throughout this batch of episodes.)

“Everything always turns out as you suspected. Doesn’t it ever get old?”

Marie’s Mind for Murder certainly doesn’t break the cop show mold when it comes to its cases or culprits. During these 10 episodes, there are dead bodies found in the forest, an amusement park, and even crashing down on top of Brand and Simmel’s car. The only murderer who stood out in a significant way appeared in Ep. 2/“Marie and the Charm of Evil”, and it was a killer who considered himself Marie’s intellectual equal. As I mentioned earlier, each episode runs a little less than 90 minutes, which is about twice as long as the average hour-long drama in the U.S. The result is Brand and Simmel chasing down more red herrings than usual because we know the case won’t possibly be solved at the 50-minute mark.

But despite its relative lack of originality and mildly laborious running time compared to other cop shows, Marie’s Mind for Murder works for the same reason any successful TV program is able to captivate viewers: you want to watch these people over and over again.

“People can be full of surprises.”

Brand and Simmel click together and as separate characters. Brand is an uncommon TV protagonist in that she’s not tortured by a dark secret or traumatic event from her past. (Even when her marriage hits a rough patch in Ep. 4/“Marie and the Murderous Oblivion”, Brand mostly maintains her sunny disposition.) Millowitsch is an interesting performer in that the actress can both recede into the background of a scene — to stand back and watch a suspect or her peacock of a partner preen around — or take command when Brand needs to. It’s a refreshing and effective change to see a main character in a TV drama who is good at her job and not a jerk about it. Maybe it’s because a good amount of the jerkiness is handled by Simmel. Thankfully, Schonemann’s winning performance as the dim, well-meaning Simmel keeps the audience firmly on the clownish cop’s side.

Millowitsch and Schonemann have a breezy chemistry that balances the darker moments in the series. However, the connection is also substantial enough to make you care when Brand or Simmel are in trouble. (Which is quite often.) Schonemann’s Simmel, in particular, does a poor job of hiding how much he cares about Brand. And that’s another place where Marie’s Mind for Murder stands apart from most American everything cop dramas. Instead of the usual May/December pairing of older man/younger model woman, the show has Marie as the worldly, sophisticated older character and Simmel as the younger, moonier colleague.

Marie’s Mind for Murder: Set One has 10 episodes on five discs. There are no special features and each installment is presented in German with English subtitles. Instead of individual episodes, think of each caper as a TV movie, and the running time might be more palatable. The show doesn’t explicitly make Brand and Simmel’s connection romantic — although Simmel doesn’t react well when a handsome stranger starts paying attention to Brand in Ep. 10/“Marie and the Moment of Death” — but the main idea comes through clearly: these two actually care about and like each other. And, by extension, the audience cares about and likes them too.