Posted in: Disc Reviews by Gino Sassani on March 3rd, 2015 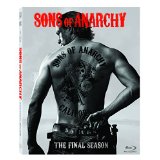 “Remember when our biggest problem was which Mayan to kill?”

All good things come to an end, and all rides eventually reach their destination. It’s all come home for the gang at Sons of Anarchy, and you can believe that if anyone is left standing when it’s over, there will be scars. Kurt Sutter has taken the culture of the motorcycle club, don’t call them a gang, and made it accessible to a regular audience. He did that not by attempting to overwhelm us with the iconography of the genre. He did it by giving us incredible characters with incredibly complex story arcs and inter-relationships. Honestly, it couldn’t have been an easy task. I could not have cared any less for this particular genre or culture, but I’m really going to miss the characters of Sons of Anarchy.

The show always retained its share of riding and action, but it’s not so much the focus of the series. Sutter might have started the show to please the biker crowd, but it’s obvious that he’s been reaching for a much higher goals The plots are, dare I say, Shakespearean in scope. Plots to topple kings and families who plot against family. Betrayal. It’s all there. Sutter has finally admitted what I’ve long suspected. Now there’s no question he’s spent some time with the Bard.

It’s warning time. If you have not seen the sixth season, this review will contain major spoilers that you may not want to know about going in. It’s best if you get yourself caught up before reading anything more. If you are thinking of watching the final season and skipped the previous, I promise you that’s a huge mistake. These two seasons are very much a part of a single whole. I’m talking more than the usual season-to-season continuity. It’s obvious that Sutter was already playing out his endgame when the sixth season began. You have been warned. I won’t spoil season 7 here, but I will spoil season 6.

The sixth season ended with the huge murder of Tara by Gemma. Juice attempts to help her cover it up, and together they blame the Chinese for the death. It is that choice more than the murder itself that sets the course for the devastating final episodes of Sons of Anarchy. Of course, Jax is going to retaliate, which brings bloodshed not only with and from the Chinese but every other gang as the balance of power comes unglued. Before long Jax and the boys are at war with everyone else, and all based on a lie. Without giving up too much detail, the consequences are the bloodiest in the show’s violent history. Even for someone like myself who has become a bit immune to film and television violence, there are moments in this season where I found myself taken completely by surprise at the brutality and carnage Sutter has brought to the season. This is massacre on a level that I honestly haven’t seen before on a television series.

I think the power here is with the cast. There’s a dedication to character here that I find quite rare in television. None of these characters are particularly strong on their own. I’m on record with my disappointment with Charlie Hunnman. Here he’s bolstered by the others. In his final hours playing Jax, he has finally reached a point where he’s delivering without saying a word. It’s quite a transformation, but it’s evident across the board. Each fits more like a puzzle. It’s the way all ensemble casts should work, but it rarely happens this way. When we lose a character, it does forever change the dynamic of the show, because a piece of the group personality is missing. The relationship dynamics are intricate, and the chemistry is something you can’t write into a show. The good thing is that they know they have something special here, and no one appears to take it for granted. I couldn’t see how the show could go an entire season without Ron Perlman. I’m as shocked as anyone else to have been completely wrong. Whatever it is that Sutter has, it’s quite obvious that he extracts from his actors an almost cult-like loyalty and passion. They’ll literally do anything for him and the show, and it’s that willingness to follow so faithfully that takes these performances to a level rare for a television series. You hear all the time the standard love-fests on extras. But these guys really do genuinely love each other, and it extends from cast to crew, and Sutter appears to have been the inspiration for such devotion. The result is that Sons of Anarchy really is greater than the sum of its parts.

The guest cast is also pretty strong here. Jimmy Smits returns from season 6. He’s quite the heart of this season and really our look from inside these events. He’s being swept up into all of this just like the audience is. Drea de Matteo becomes a series regular and is also very much the heart of the show’s final moments. Annabeth Gish signs on as the new law in Charming. Marilyn Manson plays a crazy Nazi gang leader. Porn star Jenna Jamison shows up as an actress on the Club’s video production of a horror/porn film called Skankenstein. Sutter’s connection with The Shield is legendary, and he had pretty much worked in every actor from that show except Michael Chiklis. I never expected he would be a part of this, but he gets two episodes and plays a part in the series climax. Go figure.

Sons of Anarchy is presented in its original 1.78:1 aspect ratio. The 1080p image is brought to you via a solid AVC/MPEG-4 codec. The series sports a gritty-realism feel, and the high-definition release plays well into that feel. Colors are really pretty muted here, but it’s the detail that really shines. Black levels are excellent. In close-ups you can really see the texture and creases in the leather vests. There aren’t any compression artifacts, and you’ll get a pretty good 25 mbps average in the compression. The quality is identical to the first two releases.

The DTS-HD Master Audio 5.1 track has some solid LFE. You can really hear those bikes roar at times. The music cues live mostly in the rear speakers. The whole thing feels pretty wide. Dialog is perfect. There’s very much a movie quality to the sound here.

There are Audio Commentaries on selected episodes.

Carpe Diem – The Final Season of Sons of Anarchy: (1:11:37) This feature is split in two parts, but thankfully there’s a play-all option. It’s loaded to the last minute. There’s a production diary for each of the episodes complete with plenty of behind-the-scenes stuff. You get to see and hear the farewell speeches of each of the actors when they complete their final scene for the series. There are some really touching moments here. There’s the usual cast and crew thoughts. You get Comic Con panel footage and red carpet moments from the premier of the final episode at the Chinese Theatre in Hollywood.

Anarchy Legacy: (4:50) You get a look at the comics and video game. There’s talk of future projects and solid plans for a prequel series.

Motorcycles Of Mayhem: (5:11) Cast and crew talk about riding the bikes and what is significant for each character’s bike.

The franchise will not be dormant long. Fox has every intention of bringing a version of the series back. Sutter is absolutely on board. The likely suspect is a prequel, but I wouldn’t rule out an eventual sequel. Jax’s young boy Abel looks pretty much like a young psychopath in the making. I can’t help but think as Sutter lingers on those eyes that we’re going to see what the next generation of SAMCRO looks like. The death fatigue does get to you after a while. It should come as no surprise that several of the series regulars don’t make it out of here alive. You’ll find out soon enough who makes it and who doesn’t. Let’s just say that Mr. Mayhem is very busy this year. “What a bloody mess… but in a good way.”

Gino Sassani is a member of the Southeastern Film Critic's Association (SEFCA). He is a film and television critic based in Tampa, Florida. He's also the Senior Editor here at Upcomingdiscs. Gino started reviewing films in the early 1990's as a segment of his local television show Focus. He's an award-winning recording artist for Omega Records. Gino is currently working on his 8th album Merchants & Mercenaries. Gino took over Upcomingdiscs Dec 1, 2008. He works out of a home theater he calls The Reel World. Favorite films: The Godfather, The Godfather Part II, The Body Snatcher (Val Lewton film with Karloff and Lugosi, not the pod people film), Unforgiven, Gladiator, The Lion King, Jaws, Son Of Frankenstein, The Good, The Bad And The Ugly, and Monsters, Inc.
Beyond the Lights (Blu-ray) Outlander: Season One, Volume One