Posted in: Disc Reviews by Brent Lorentson on March 10th, 2015 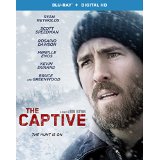 I’m starting to wonder if it is time we officially made a sub-genre for kidnapping films.  It’s a storyline that has been played out for decades but continues to offer up some engaging and oftentimes heart-wrenching tales that for the most part have happy endings but that seems to be a far stretch from reality, though I doubt audiences are looking for these bleak realistic endings and mostly prefer the Hollywood ending where everyone is rescued in just the nick of time.  When Prisoners came out, I had hopes that it would be a film that wouldn’t shy away from the harsh realities, and for the most part it succeeded, but I still felt it held back.  Now we have Atom Egoyan throwing his hat into the murky subject matter. Let’s face it; kidnapping is a horror no parent wants to experience and would much rather not think about.

Matthew (Ryan Reynolds) is the unfortunate parent who in the moment of doing something as trivial as running into the shop to grab dinner for the family, his daughter is taken without so much as a trace of evidence.  Not only does he have to face the guilt of losing his daughter while being only yards away from her, but we see how he is on the receiving end of blame from his wife Tina (Mireille Enos) and a suspect by the police.  Sometimes films like to dangle the shadow of doubt that the parent could be involved with the disappearance. Though in this case where we know Matthew’s innocence, we are able to feel his frustration as all this time wasted while looking at him as a suspect and the real criminals are only slipping farther away.

Another great character, though unfortunately a little underused, is Jeffrey (Scott Speedman) who is a detective that specializes in child kidnappings, but more specifically where kids can end up on the internet.  There is coldness to this character that you can respect simply because of the horror he witnesses in a day-to-day routine, but as he focuses his attention on Matthew, well, at times you simply want to smack Jeffrey.

Seeing the dynamic of all the players involved, whether it is Nicole (Rosario Dawson), the lead investigator on the case, or the real perpetrator Mika (Kevin Durand), Egoyan manages to place the viewer in the middle of this web where the viewer holds all the cards but is helpless to help the characters in need.  This is a subtle yet clever tactic that managed to suck me in to care about all these characters, even Mika, that is until we discover how truly twisted this character is.

Where the film does start to lose me is, even though we have some well-written characters and there is definitely enough trauma here to make this a compelling drama, it still manages to at times be a bit boring.  Also, I don’t understand why the film feels the need to shy away from some of the situations. All we are given are glimpses into some kind of child sex ring, but instead of sex the subscribers are simply into hearing stories from the victims, nothing naughty or gross, but instead personal trivial stories.  Sure, it’s disturbing, but just isn’t as bad as one would suspect with the villains involved.

As the film continues and the victim now seems to be helping the kidnappers, the film takes some turns that are a bit unrealistic and simply pulled me out of the film.  It didn’t ruin the experience, but it certainly led to a conclusion that just had me wanting more.

The Captive is presented in the 2.40:1 aspect ratio.  The 1080p image is arrived at with an AVC MPEG-4 codec at an average of 18 mbps.   The snowy-cold image of the film is suited for the tone of the film.  Whether we are outside in the snow or indoors there is a significant lack of warmth in this film that avoids the use of having a wide color palette.  The most notable scene of color, though, is when we see a character in a red dress, no doubt a subtle clue as to what is later to occur to this character.  The imagery is for the most part flat; we get some detail in the characters’ faces, though I’m not sure if it is the cold or the color timing that seems to give the characters’ flesh tones a lighter hue.  This may not be the best looking of presentations, but it works for the telling of this story.

The DTS Master Audio 5.1 audio track is well used here, but in some of the most subtle ways.  This is a film where the use of silence and ambience goes a long way.  The dialog is clear throughout the film.  This is a very low-key film, and the use of music in the scenes where Cass is held captive, where the music seems to bounce and slither through the walls of the home, allows the viewer to feel how the character is a prisoner and very much locked away from the world.

Audio Commentary with director Atom Egoyan:  While this is far from a memorable commentary, Egoyan does what he can to offer insight into the various stages of the film and what brought him to the project.

Captive Thoughts: (8:49) A very brief and standard feature where the director and cast members talk about the project and what appealed to them.

Alternate Ending: (1:51) Well discussing this in detail would spoil the film’s ending, I’m not a fan of this ending. I’m glad they stuck with the one we see in the film.

Deleted Scenes: (13:56)  For the most part we get a lot of filler scenes. For the most part it’s obvious why this made its way to the cutting room floor, though I did appreciate one scene where we get to see the mother watch a video simulation of how her daughter has most likely aged over the years.  It was a profound little moment they should have left in, but at least we get to see it in this form.

While the film isn’t perfect, The Captive is a film worth watching for those who enjoy intense dramas.  Though I did “enjoy” watching the film, it’s doubtful I’ll ever watch this film again.

Brent Lorentson is a horror writer and film critic based out of Tampa, Florida. With a BA in Digital Film, he co-wrote and co-directed Scavenger Hunt. His short stories have appeared in various horror anthologies. In 2019 his short script Fertile Blood will be a part of the anthology horror film Slumber Party. He is currently working on his first novel A Dark and Secret Place set to be released in late 2019. Favorite Films: Taxi Driver, Fight Club, I Saw the Devil, The Wild Bunch, Dawn of the Dead, A Clockwork Orange, Pulp Fiction, Heathers, The Monster Squad, and High Fidelity.
The Salvation Contest: Win A Copy Of Bank$tas On DVD From Arc Entertainment