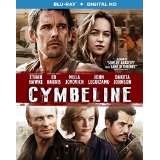 At this point, it’s pretty difficult to find a play by William Shakespeare that hasn’t been produced for the stage or adapted for the screen many times over. So imagine my surprise when I came across Cymbeline, a Shakespearean play I’d never even heard of. (Though maybe that says more about me than it does about the play’s popularity.) Filmmaker Michael Almereyda transplants the action to the present day, but the tablets, cell phones, and other anachronistic touches aren’t enough to inject life into a languid, lurching film that largely squanders a pretty impressive cast.

“For years, Cymbeline — King of the Briton Motorcycle Club — has maintained an uneasy peace with the Roman Police Force.”

The fact that the movie opens with a series of expository title cards like the one above is the first sign of trouble; it’s the opposite of “Show, Don’t Tell” storytelling. For example, we’re told right off the bat that The Queen (Milla Jovovich) has an agenda, instead of letting us observe that fact on our own. She is married to Cymbeline (Ed Harris), the powerful, menacing leader of a biker gang that is at odds with a corrupt police force led by Caius Lucius (Vondie Curtis-Hall) who demands the gang make tribute payments.

However, the film focuses mostly on a pair of (stop me if you’ve heard this one) star-crossed lovers. Imogen (Dakota Johnson) is Cymbeline’s daughter, and she is meant to marry The Queen’s unstable son Cloten (Anton Yelchin). However, Imogen is in love with Posthumus (Penn Badgley), a penniless young orphan who was raised by Cymbeline following the death of his father (Bill Pullman). When Cymbeline discovers that Imogen and Posthumus have married in secret, he banishes the young man while Imogen remains under her father’s thumb. A distraught Posthumus decides to test Imogen’s fidelity by wagering a scoundrel named Iachimo (Ethan Hawke) that he can’t seduce Imogen and produce proof of her adultery. Iachimo goes to see Imogen…and Posthumus’ misguided wager turns out to be about as disastrous as you’d expect.

Almereyda wrote and directed Cymbeline after previously pulling the same double duty for 2000’s Hamlet, another modern-day Shakespeare adaptation that starred Hawke. Both of those films feature artful touches that bring the story into the present — in Cymbeline, an internet search history gives a character’s location away — but the message is more muddled here. Simply put, there’s really no compelling reason for the main characters to be members of a biker gang. Obviously biker culture and the Bard proved to be a winning combination for seven seasons on Sons of Anarchy, but Cymbeline seems more concerned with telling a sub Romeo & Juliet-style tragedy anyway. (There’s even a final-act mishap involving poison here.)

In fact, you could easily brand Cymbeline as “Sons of Anarchy meets Romeo and Juliet” and you wouldn’t be entirely wrong. Except unlike Sons — which largely takes thematic cues from Shakespeare — Cymbeline retains the play’s original language and is curiously inept at portraying some of the story’s more brutal moments. (I don’t mind a beheading taking place off camera, but a key gunfight also happens off-screen and a car chase/shootout is embarrassingly staged.) And whatever you may think of Baz Luhrmann’s “Shakespeare on acid” aesthetic in updating Romeo + Juliet, it’s impossible to deny the filmmaker brought energy and anarchy into the proceedings. On the other hand, Cymbeline mostly lurches from one disjointed scene to the next, most notably with the out-of-nowhere introduction of Belarius (Delroy Lindo), a banished former member of Cymbeline’s gang who is secretly raising two of the king’s sons(!?)

The closest doppelganger for this film might actually be Coriolanus, another recent adaptation of a lesser-known Shakespeare play that brought the action into contemporary times. The biggest thing Coriolanus had going for it was a gale-force, all-consuming star performance from first-time director Ralph Fiennes. Cymbeline has an actor capable of that kind of work in Harris, which is why it’s so frustrating to see him sidelined for so much of the film. Thankfully, when Harris is on screen, he radiates the weary, reflexive menace of a man who’s had to watch his back for a long time. If only the film had given his most dangerous backstabber sharper teeth; Jovovich seems up to the task of playing the conniving Queen, but winds up having just as little to do as Harris. (At least she gets to cover Bob Dylan’s “Dark Eyes.”) The brightest spot is easily Hawke, who brings a welcome impish charm to his troublemaking character but still isn’t a big enough part of the story to truly drive the action.

As a result, a lot of the burden falls on the younger actors. The romantic hero is often the least interesting part for an actor to play, and Badgley is mostly a drip as Posthumus dazedly wanders (or skateboards) from one scene to the next. Johnson filmed this before her Fifty Shades of Grey breakout, and displays a similar knack for shining through in key moments despite not quite being able to elevate the material. (All this despite being saddled with a Shailene Woodley-‘do for a good chunk of the film.) Seasoned actors like Pullman, John Leguizamo, James Ransone, and Kevin Corrigan pop up only to stand along the margins of the story.

I appreciate that Almereyda tried to shine a light on a lesser-known Shakespearean work, but it appears he bit off more than he could chew here in bringing the story to the present day. “The Taming of the Shrew” isn’t exactly Shakespeare’s most famous play, but the title at least gave you a hint of what to expect when it became 10 Things I Hate About You. Cymbeline, on the other hand, seems like it was too tangled and too obscure a piece of work to bring into modern times. After all, what’s the point of updating something that people scarcely knew or cared about in the first place?

Cymbeline is presented in an aspect ratio of 1.85:1. The 1080p image is arrived at with an AVC MPEG-4 codec at an average of 18 mbps. There’s a tremendous amount of fine detail throughout, whether we’re talking about close-ups during interior scenes or (more impressively) panoramic outdoor shots. The latter are particularly startling in their clarity and vivaciousness, especially since the movie itself is kind of a gritty slog. Black levels aren’t quite as inky as they could be during those interior scenes, but there is strong shadow detail throughout. (Particularly with any scene involving Harris.) Some other interior scenes feel like they have a slight grayish pall, which actually suits downbeat the material quite well. And thankfully, those moments are set off by lovely, textured bursts of color throughout the film.

The DTS-HD Master Audio 5.1 track is obviously heavy on the rich, florid dialogue and should be commended for its strong fidelity and clarity. The score by David Ludwig also gets plenty of play in the rears. Unfortunately, there’s really not much in the way of immersive sounds in the speakers; when there is no music in a scene, the rears mostly crank out what sounds like white noise. Guess I never expected a movie about biker gangs to be so…quiet.

Commentary with writer/director Michael Almereyda, actor Ethan Hawke, and author Anthony Holden: Almereyda and Holden — who literally wrote the book on Shakespeare — start off by putting “Cymbeline” in historical perspective (Holden says it was Shakespeare’s antepenultimate play), and the adaptation’s long and winding journey to the screen (Almereyda wrote the script in 2009). Hawke jumps in a bit later and infuses the informative, scholarly track with some focused energy. (We also learn Almereyda offered Hawke any role he wanted.)

I definitely recommend you listen to this track because it gives you a better appreciation for how much thought was put into modernizing Shakespeare’s story; unfortunately, the track also makes it exceedingly clear how much of the convoluted play had to chopped off to make this convoluted movie.

Behind the Scenes of Cymbeline: (13:01) Cast members talk about embracing the challenge of taking on the Bard. Hawke is the most enthusiastic and eloquent as he extolls the advantages of doing one of Shakespeare’s lesser-known plays. (Not as much audience fatigue and none of the baggage that comes with adapting a famous/beloved property.) There are also the customary compliments for director Michael Almereyda.

Extended Cast Interviews: Awkwardly-cut, longer versions of the interviews and sound bites featured in the “Behind the Scenes” segment. Includes comments from Ethan Hawke (3:47), Dakota Johnson (2:57), Ed Harris (2:12), John Leguizamo (3:54), Anton Yelchin (3:44), and Penn Badgley (2:45). There is no Play All option.

Despite the presence of some really solid performers and a director who clearly has an appreciation for the Bard, Cymbaline is bottom-of-the-barrel Shakespeare. You’ll be better off skipping this one and revisiting Olivier, Branagh…or Maria.