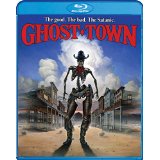 Shout Factory has brought yet another 1980’s Empire Pictures horror film to high definition on Blu-ray. This is another one of those Schlock-O-Rama films that are best viewed with a group of friends. While it’s certainly a step ahead of some recent entries on this list, there’s plenty of fun to be had in a gathering. This release also has the advantage of just one film on the disc. Of course, I’m talking about Ghost Town, directed by Richard Governor, but did you know that Mac Ahlberg of Ghoulies and Re-Animator fame was an uncredited assistant director on the film? The man’s a pretty good cinematographer, and his eye lends itself to a better-looking shoot with more atmosphere than you might ordinarily find on these things.

Kate (Hickland) is driving through the desert in her red Mercedes Benz convertible, having the time of her life. A veil discarded to the winds tells us she’s just left some poor sap waiting at the altar, and she’s making her escape. Her flight of freedom is short-lived, as she finds herself in the middle of a terrible sandstorm that carries her away. Her car’s found by the local sheriff with terrible damage.

Enter young Deputy Sheriff Langley (Luz) who is more interested in playing quick draw with bottles and cans than actually doing any police work. When he’s called in to help with the missing person report, he doesn’t quite make it to the scene. Instead he encounters a wraith on horseback who torches his truck and leaves him stranded. He’s not alone, however. He comes upon the shallow grave of an old lawman from the days of the wild west. The skeleton grabs him and passes his mission on to the unsuspecting deputy before returning to his decades-old rest.

Langley is led to a ghost town where spirits of the ancient population still dwell in some kind of alternate reality. They are all kept there and threatened by the spirit of the town’s infamous outlaw Devlin (Skaggs), who was responsible for putting the lawman in the shallow grave. It’s up to Langley to avenge his spirit and free the town’s spirits so that they can continue to whatever awaits them.

Catherine Hickland and Jimmie Skaggs play these parts about as dumb as a bag of rocks. The spirits of the town do their best to help out, but it takes a house, or a church, falling on them to figure out what needs to be done. Yeah, it’s one of those circumstances where this should have been a short film. But then we wouldn’t have met such quirky characters as Dealer, the blind poker dealer in the salon, played by Bruce Glover, or Grace, the salon girl, played by Penelope Windust. More importantly we wouldn’t have time for Langley to spend some time in the hayloft with innocent young Etta, played by Laura Schaefer. Have to maintain that R rating, after all.

The clues can be found not only in the warnings of the town’s spirits, but in the flashbacks that Langley witnesses of the events that led up to the town being stuck in a purgatory world. We get to see the murder of the aforementioned lawman, and we begin to understand what’s going on. Unfortunately, we get it long before Langley does. Must not be a long line of folks trying to become deputy sheriff in these parts. Kate is the only other living soul in town, and Langley ends up rescuing the damsel in distress. Etta’s not so lucky. All the while Jimmie Skaggs hams it up as the decaying corpse of the lawman who appears to know every horror and western cliché ever written. His henchmen are all the kind of mindless dopes you used to see in the old Batman television show. Fortunately, none of these roles call for any tremendous performance range, and appropriately or not, none is to be found.

The real star of this piece is the production design. The atmosphere is above average and offers quite a visual treat from the plethora of skulls laying about to the various buildings and props of the western town. There are some rather nice moments when past images bleed into the present, and it all adds up to enough fun to keep you entertained for the 85 minutes of the movie. No more. No less.

Ghost Town presented in an aspect ratio of 1.78:1. The 1080p image is arrived at with an AVC MPEG-4 codec at an average 35 mbps. The original film was a 1.85:1 presentation, and the difference here is hardly worth mentioning at all. It’s an old low-budget film, and you’re getting as good as you can expect. The print is relatively clean with a few examples of dirt or other artifacts. Colors represent an accurate look at typical 80’s film stock. There’s enough detail to enjoy the production design.

The DTS-HD Master Audio 2.0 is livelier than you might expect. It’s a faithful reproduction of the original mono with a little extra in the sub and depth department.

This mixing of genre elements has been around since Billy The Kid vs. Dracula or Jesse James Meets Frankenstein’s Daughter, both from 1966. It was strictly for fun then, and it’s strictly for fun here. If you try and take it too seriously, you end up with Cowboys & Aliens and more than a little egg on your face. Best to enjoy the simple pleasures of a few good friends and some inexpensive schlock in the Blu-ray player. Otherwise you start asking questions about being able to melt gold on a pot-belly stove in just a few minutes to make “special” bullets. And honestly, “no good can come of that “.

Gino Sassani is a member of the Southeastern Film Critic's Association (SEFCA). He is a film and television critic based in Tampa, Florida. He's also the Senior Editor here at Upcomingdiscs. Gino started reviewing films in the early 1990's as a segment of his local television show Focus. He's an award-winning recording artist for Omega Records. Gino is currently working on his 8th album Merchants & Mercenaries. Gino took over Upcomingdiscs Dec 1, 2008. He works out of a home theater he calls The Reel World. Favorite films: The Godfather, The Godfather Part II, The Body Snatcher (Val Lewton film with Karloff and Lugosi, not the pod people film), Unforgiven, Gladiator, The Lion King, Jaws, Son Of Frankenstein, The Good, The Bad And The Ugly, and Monsters, Inc.
10 Cent Pistol Mission: Impossible — Rogue Nation