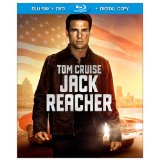 Jack Reacher is presented in its original aspect ratio of 2.35:1. The 1080p image is arrived at with an AVC MPEG-4 codec at an average 30 mbps. This is old school at its best in high definition. It’s great to see something shot on 35mm. You get just the right amount of grain that gives you the filmatic atmosphere you just can’t reproduce on video. I love digital for a lot of kinds of projects, but a movie like this thrives on film. The high-definition image presentation is almost flawless. You get wonderful detail down to the ridges of a quarter that is a key piece of evidence. Colors are natural and never overly bright or ultra-realistic. Black levels are wonderful, allowing perfect shadow definition except when McQuarrie doesn’t want you to see that clearly in the shadows. Shots of the locations bring back memories of time I spent on those same Pittsburg roads. The film captures the lighting of the city perfectly. If you have friends out there who say film and HD don’t mix, this is the disc you want to roll for them. Case closed.

The DTS-HD Master Audio 7.1 is everything you could expect. The mix is aggressive and drives the action like a thumping heartbeat throughout. The score pulls you into the action without getting in its own way. The gunfights are totally immersive. Dialog is crisp and clear at all times. The best thing here is the overall mix and volume. I’ve seldom listened to a more perfectly balanced audio presentation.

There are 2 Audio Commentaries. The first features Tom Cruise and Director Christopher McQuarrie. It’s rare for a commentary to be worth a quick second run through the movie. This one is. It’s incredibly informative, particularly for a guy like me who wasn’t all that familiar with the books. I feel like I have a much better understanding of just who Jack Reacher is. You can tell the two work well together and enjoy each other’s company. The second commentary is with composer Joe Kraemer. He doesn’t talk all of the way through. Much of it is pretty much an isolated score, giving you ample opportunity to listen to the pounding music.

There’s a franchise here, to be sure. If you’re a little tired of the usual conventions and clichés, “There’s a Jack Reacher here to see you.”

Gino Sassani is a member of the Southeastern Film Critic's Association (SEFCA). He is a film and television critic based in Tampa, Florida. He's also the Senior Editor here at Upcomingdiscs. Gino started reviewing films in the early 1990's as a segment of his local television show Focus. He's an award-winning recording artist for Omega Records. Gino is currently working on his 8th album Merchants & Mercenaries. Gino took over Upcomingdiscs Dec 1, 2008. He works out of a home theater he calls The Reel World. Favorite films: The Godfather, The Godfather Part II, The Body Snatcher (Val Lewton film with Karloff and Lugosi, not the pod people film), Unforgiven, Gladiator, The Lion King, Jaws, Son Of Frankenstein, The Good, The Bad And The Ugly, and Monsters, Inc.
Once Upon a Time in Brooklyn Star Trek Into Darkness