Posted in: Disc Reviews by Gino Sassani on August 11th, 2015 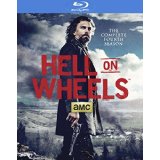 “Milk will be spilled.”

That’s for sure, and you can expect more than a little crying over it all. The saddest news, however, is the coming fifth season will be the show’s final year. You really should not even think about joining the series from this point. I suspect it will still be quite entertaining, but for the full experience you do have to start from the beginning. The evolution of the Cullen character from Civil War veteran out for vengeance to the man who we see in the fourth season is a rather nice journey to witness. So saddle up for the first three. You can find the reviews for other seasons here.

We pick up Cullen Bohannan (Mount) as we appear to pick him up at the beginning of every season before. He always finds himself separated from the railroad and having to find his way back. It doesn’t matter if it’s jail or self-exile in the winter wilderness. Cullen always finds himself on the outside looking in. This time he’s been the prisoner of The Swede (Heyerdahl), who has impersonated a Mormon bishop he murdered and now has control of the Mormon settlement at Fort Smith. Cullen now has a wife and a child and has been looking for a way to get them all out of the fort. It’s no spoiler to tell you that he’ll manage to discredit The Swede and get his family free. But don’t for a second think that it’s going to be the end for the diabolical Swede. He hooks up with none other than Brigham Young (Henry) himself and is set to cause more trouble in the final season.

The railroad’s Hell On Wheels community has changed quite a bit since the previous season. While the tent city still exists to a certain extent, the community has now grown into the start of a great city: Cheyenne. Mickey (Burke) is now the mayor and owner of the “Comfort House” which is basically a saloon and brothel. He and Durant (Meany) are now working together, and they are pretty much the law in Cheyenne. With that level of civilization finally happening, it wouldn’t be long before the federal government would finally reach its long arm of the law into Hell On Wheels.

The Federal Government comes in the form of John Campbell (Weber). He’s noted for shaking up lawless places, and President-Elect Grant has sent him to do the same for Cheyenne.  He brings with him his own crew to serve as judge and marshal, and it doesn’t take long before a makeshift hanging in the casino establishes their brand of justice into the newly designated Wyoming Territory where Campbell becomes the first Territorial Governor. But he wants more than law and order. He begins to go up against Durant not only for power but for wealth. He begins to take his land with designs to take the whole dang railroad. It is within this power struggle that the drama of season 4 takes on its most compelling action. Campbell is the first adversary who is actually a match for Cullen, and his return to the railroad sparks a bit of rebellion that will cause plenty of trouble.

Another new character this year comes in the form of outlaw Sydney Snow (Scarfe). He’s an old war buddy of Cullen’s who ends up becoming a dangerous rival in the game between Durant and Campbell. The inevitable showdown turns into a tragic moment for Ruth (Kropinski) and leads to one of the most compelling episodes in the series entire run.

That episode is called Thirteen Steps. Surprisingly enough, it’s an episode light on the action and confrontation that makes the show exactly what it is. It’s a quiet piece of drama that finds Ruth insisting she pay the ultimate penalty for a deed she committed in that Sydney/Cullen showdown. It’s one of those contemplative episodes where all of the show’s usual trappings are stripped away, and two actors are given the opportunity to carry it all on their own chemistry and performance. The episode takes the courageous path and ends with some of the show’s most potent imagery. It will also set Cullen on the path that leads him, yet again, away from the railroad, where this time he won’t be returning… at least to the Union Pacific.

The show should be applauded for taking chances that lead to such wonderful episodes as Thirteen Steps. Sometimes those chances don’t pay off, as is the case with Bear Man. It was a good idea but poorly executed. The episode attempts to show us the fate of Elam, who was believed dead after he set out in search of Cullen at the end of the previous season. It’s something we all wanted to know. Unfortunately, the episode sticks only with his character in a Dances With Wolves scenario that falls extremely flat. The episode appears to be as stuck in the mud as the tents in Hell On Wheels and offers us an Elam story that was not faithful to the character. It would conclude in the next episode, but for this hour I found myself scratching my head. So, thus we see the show taking chances by changing it up in a huge way. One became the best episode of the show, the other the worst.

Jake Weber is such a terrific addition to the show, both in his performance and the inevitable changes his presence brings to the open territory. He first came to my notice as Joe in Medium. There he played this mild and caring family man. He was the model for a supportive partner with a wife who had abilities most wouldn’t be able to handle. Here he plays a rather villainous man with unbridled ambition and willing to abuse the authority he brings in his pockets. From his accent to his delivery, this is the best new character to grace the show since it first began. Campbell’s presence also gives us a fresh perspective on the material. Government intrusion is a hot topic these days, and Hell On Wheels manages to bring home that theme in an historical context that reminds us just how far the authority of the government has evolved since its founding. There’s food for thought here helped by tight writing and a brilliant performance.

The show is certainly moving away from the mobile tent community that gave it its name in the beginning. The show has evolved, as has its main character. Cullen is no longer the revenge-bent bitter soldier he was in the first season. He’s learned to care about something again. It’s taken him a long time to realize that this idea of a transcontinental railroad means a lot to him. Just as he was as a soldier in the Civil War, he’s part of something historic, something that will change the very fabric of American society. And so has evolved the community itself. It’s now a permanent part of the pioneer landscape, and history will be made here over the next half century. The characters and the show have grown so much it’s hard to believe this is only the fourth season.

The DTS-HD Master Audio 5.1 makes fine use of the surround field. There are plenty of very clear background sounds that bring you closer into this 1865 world. It might be distant horses walking in the mud or the sounds of a bird from the nearby wilderness. When there are large action sequences, we get the in-your-face sounds, yet still retain the subtle nature of the time and place. Dialog is just fine, and the score rarely intrudes. Subs rear their thundering heads from time to time as well. It can all be found in a very dynamic crystal-clear audio presentation.

Again the final disc offers a handful of very brief features that run an average of 1-3 minutes.

Inside Hell On Wheels: (1:05:05) This is where the true meat of the features resides. There’s a chapter on each episode and a couple additional looks. It’s really less behind the scenes and more cast and crew thoughts of the episodes main points.

I’ve been told the title sounds like it’s about motorcycle gangs, and I couldn’t agree more. The term refers to the mobile tent city that housed the workers on the Union Pacific Railroad and the support entourage the camp attracted. It was a virtual tent city that had all of the essentials: church, bar, and whorehouse. It was just after the Civil War, and the American government believed that a railroad connecting the east and west coasts was just the kind of project the country needed to pull back together and heal still-festering wounds. As one of the filmmakers accurately points out, this was the Apollo moon project of the day. Long believed impossible by the brightest engineers of the day, the railroad would cut the time it took to go from coast to coast from six months to just under seven days. It was a truly remarkable feat, and it carried with it more than a fair dosage of corruption and blood. Now AMC has brought those days from 1865 back to our television screen with an ambitious and smartly produced series. It’s a must-see. I was able to binge-watch this season in a single day. You give me 13 episodes of this kind of compelling television, “What’d you think was going to happen?”

Gino Sassani is a member of the Southeastern Film Critic's Association (SEFCA). He is a film and television critic based in Tampa, Florida. He's also the Senior Editor here at Upcomingdiscs. Gino started reviewing films in the early 1990's as a segment of his local television show Focus. He's an award-winning recording artist for Omega Records. Gino is currently working on his 8th album Merchants & Mercenaries. Gino took over Upcomingdiscs Dec 1, 2008. He works out of a home theater he calls The Reel World. Favorite films: The Godfather, The Godfather Part II, The Body Snatcher (Val Lewton film with Karloff and Lugosi, not the pod people film), Unforgiven, Gladiator, The Lion King, Jaws, Son Of Frankenstein, The Good, The Bad And The Ugly, and Monsters, Inc.
I Am Big Bird: The Caroll Spinney Story Mythbusters Collection 13