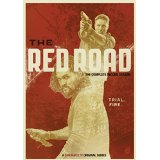 Season 2 of The Red Road, SundanceTV’s tense drama about warring communities, opens with a foreboding shot of blood being spilled on the ground. It’s a conspicuously symbolic image when you consider that the show follows the lives of the (seemingly all-white) residents of fictional Walpole, N.J. and their strained relationship with the Lenape tribe that resides in the neighboring Ramapo Mountains. (You don’t even have to squint to see several centuries’ worth of wounded feelings in this scenario.) It’s also no major spoiler to say that opening shot isn’t the last instance of bloodshed in this batch of episodes.

In case you never hopped on The Red Road, here’s a quick catchup. Lenape ex-con Phillip Kopus (Jason Momoa) and Walpole police officer Harold Jensen (Martin Henderson) find their fates (and their families) inextricably linked. An accident involving Harold’s wife/Phillip’s high school sweetheart Jean (Julianne Nicholson) and a young Lenape boy left Harold indebted to Phillip. And the fact that the Jensens’ oldest daughter Rachel (Allie Gonino) and Phillip’s younger half-brother Junior (Kiowa Gordon) were in love only added to the tension. The end of season 1 once again left Phillip and Harold in each other’s debt after helping one another survive a violent shootout with a nasty group of gangsters.

“This world isn’t real. It’s just a shadow of the real one.”

The action flashes forward one year with Phillip having spent that time in prison for his part in the shootout and Harold…getting promoted to lieutenant. (The apparent unfairness in that scenario does not escape Phillip.) The Lenape tribe is on the verge of gaining federal recognition — Phillip doesn’t need the government to legitimize his lineage — which brings a new set of problems. On one hand, the tribe would be allowed to build a casino on its land, which would bring a healthy profit for the struggling group. (The casino would also bring a new set of greedy interlopers, like the Algonquin chief played by recurring guest Wes Studi.) On the other hand, Lenape Chief Mac (Gary Farmer) would rather hang on to the tribe’s traditional values, an idea that is increasingly appealing to Junior.

On the Jensen front, Harold is encouraged to compete for the soon-to-be-open captain spot in the police department, even as a dirty, damaging town secret from the past threatens to resurface. And while Jean takes steps to deal with her schizophrenia, Rachel fears she might be a little too much like her mother. Not surprisingly, Harold and Phillip’s paths continue to intersect. Phillip becomes the prime suspect in a murder at the end of Ep. 1/“Gifts”, and the pair team up once again in the finale/ “Shadow Walker”  to try and save Junior.

My biggest complaint about season 1 — other than Henderson’s thankless, humorless work as Harold, which the show amusingly acknowledges as the unpopular character vies for the captaincy — is that it largely squandered its chance to put contemporary Native American life front and center. Creator Aaron Guzikowski (best known for writing Prisoners) remedies this situation in season 2 by diving deeper into the struggles of the Lenape and the conflicts that exist within the tribe. For example, some are in favor of building the casino because it would help pay for medical bills that are almost certainly the result of toxic sludge that’s been dumped in the water supply. Junior, in particular, carries a lot of the “old vs. new” storytelling burden as the character seeks to connect with his roots. Thankfully, Gordon is up to the challenge; he transcends the typical “surly teenager” archetype to convey a genuine sense of betrayal.

The star of the show, however, remains Momoa. The imposing actor easily commands your attention every time he’s on screen. Momoa’s severe brow means that Phillip looks like trouble waiting to happen. But the actor also projects a rascally charm that allows you to believe his mother Marie (Tamara Tunie) and other family members would keep giving him second (and third and fourth…) chances against their better judgment. The other standout is Nicholson, who is somewhat segregated from the main action, but still manages to be riveting as Jean strives to feel like a useful person.

Jean also has a particularly intense encounter with her father (guest star Mike Farrell) about the origin of her mental illness. Unfortunately, Guzikowski still can’t help himself in straining to connect every single character to every storyline on the show. (Jean’s dad also might be connected to Walpole’s dirty secret.) So it’s not enough for Studi’s Chief Levi Gall to be the season’s slimy antagonist, but his character also happens to be Junior’s biological father. Speaking of bad dads, Tom Sizemore reprises his role as Phillip’s criminal scumbag father. All of his scenes take place in the same room, but the actor still manages to be electrifying.

The Red Road: The Complete Second Season features all 6 episodes on two discs. The special features — quick-hit “Inside The Red Road” featurettes for each episode, and a “Sundance On Set” mini doc — can be found on Disc 2. The season ends with a bloody cliffhanger that leaves several lives hanging in the balance. Unfortunately, we’ll never know what happens because the show has been canceled. On the one hand, that’s not totally surprising given its quiet buzz and the fact that its star is about to relocate to Atlantis. But it’s also a shame because I felt the show was getting better.