Posted in: Disc Reviews by Gino Sassani on September 24th, 2015 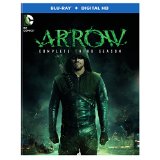 “My name is Oliver Queen; after five years in hell, I have come home with only one goal, to save my city. Now others have joined my crusade. To them, I’m Oliver Queen. To the rest of Starling City, I’m someone else. I am something else.”

That someone, that something more …that something else is the DC Comics character Green Arrow. Not to be confused with the same-colored Hornet or Lantern. In season 2 Oliver Queen finally shed the name and reputation of the Hood or Vigilante. He vowed not to kill, and he no longer has the list to guide him. His job now is to go after any bad guys in Starling City. In season 3 that job will get a lot harder to do while still keeping his vow. You can say that things get a lot more personal and that season 3 of The Arrow is all about family. And, you can bet that not everyone is getting out alive. Those who remain will be forever changed. That much is certain.

Who the heck is this Arrow of whom you speak? If that’s your first question, you need to go back a couple of grades and catch up with the rest of us. The comics are good place to begin, but the television universe is its own place and not tied so tightly to the DC comic book universe. Your best place to go to catch up would be the first two seasons. It’ll be worth the effort, and I can get you started with those reviews found Here.

Roy Harper (Haynes) has become more than just a sidekick. With a full red costume and mask he becomes Arsenal. But he’s not the only new archer in town. This season sees quite a few bad guys take up the bow. Malcolm Merlyn (Barrowman) has returned, and he’s going to be loads of trouble. More on him later. Oliver has an obsessed admirer in the villain Carrie Cutter, aka Cupid (Gumenik). There are a few counterfeit archers as well. Let’s not forget Nyssa (Law), come to avenge Sara’s death.

The season begins with the death of Sara. It’s not really a spoiler, because her death triggers most of the main events of the third season, to be sure. For the better part of an episode, actress Caity Lotz gets to spend the time dead on a table in the lair. They kind of leave her there for a while, and may I say, decaying on a table is the best performance she’s given. Now that’s a real spoiler alert. This event is vital. Questions over who killed her and why will drive the main story line pretty much through the season finale. It will involve Thea, Merlyn, and the arrival of the long-anticipated Ra’s al Ghul, played absolutely brilliantly by Matt Nable.

The season’s flashbacks do not occur on the island. As we expected from season 2’s finale, Oliver is now in Hong Kong, where he’s working as an agent for Amanda Waller (Addai-Robinson) and ARGUS. He’s pretty much a captive living with Maseo (June) and his family. He’s turned into an interrogator/torturer and hit man. These flashbacks will be needed information, as Maseo and the things they did in Hong Kong will create revelations of Ra’s plans toward the season finally.

Merlyn attempts to maneuver Oliver into challenging Pa’s through his sister. He’s been living under a League of Assassins death threat and sees a way to make Oliver risk his own life to negate it. The result is a mid-season cliffhanger where Oliver is presumed dead and the setup for Ra’s plans which involve his wanting Oliver to be his heir and the next Ra’s Al Ghul. He will do anything in order to get Oliver to agree. When pushed to his limit, he’ll disgrace Oliver in Starling City and turn it all against him. That’s where yet another fake Arrow causes trouble. Ra kills in the guise of The Arrow to push the city over the edge and a shoot to kill warrant is out for Oliver when his identity is blown.

The season sees a ton of team building. Laurel (Cassidy) trains and takes over the role of Black Canary. She’s much better in the part and closer to what she was in the comics. She becomes a kind of unofficial part of team arrow. They learn to work and function when they believe Oliver dead. It’s a new day for a team that is learning to work for their own goals and methods. These interactions and decisions create some of the best drama for the season and provide incredible character growth for the individual characters.

Not the least of these characters is Felicity (Rickards), who takes a huge step toward the strong character she always had the potential to be. She no longer feels bound to blindly follow Oliver, and this is all complicated by a new player in the season.

There is a crossover with The Flash, but I discovered too late it wasn’t really necessary to catch the episode of The Flash first.

He’s pretty much the most significant hero added to the show. Superman himself Brandon Routh joins the cast as billionaire scientist Ray Palmer. We all know he’ll become Ant Man, and in a way he does this season. He begins as a bit of a nemesis. He arranges a hostile takeover of Queen’s company and is trying really hard to swoon Felicity. Fans of the comics know that The Atom is much like Ant Man in the Marvel Universe. He develops a suit that allows him to shrink at will, retaining the mass and power of his large self. But in this show he doesn’t yet shrink. The season finale offers a glimpse of that future. Instead he’s more Iron Man than Ant Man. The suit gives him strength, weapons, and the ability to fly. The similarities between Palmer and Tony Stark just can’t be ignored. Palmer starts as a nemesis but ends up an unofficial part of Team Arrow before it’s all done.

We learn even more about Felicity’s past in an episode where a terrorist group launches a cyber attack under the name Brother Eye. In the comics Brother Eye was really a satellite system developed by Bruce Wayne. Here it’s driven by a super virus that Felicity wrote years earlier when she was a bit of a bad girl hacker. We get to see those days of a black-haired Felicity in love with a bad boy who wants to use her code for far more nefarious things than she had planned. It’s nice to see more of that character’s background, a bit of her “hooker” dressing mother played by NYPD Blue’s Charlotte Ross. If any character gets the big growth season it has to be Felicity, and it’s well played out by actress Emily Bett Rickards.

“The city’s under attack? It must be May.”

The season has one of the best story builds of the show’s three-year run. Ra is a great character and an unusual situation where the hero is fighting not the villain so much as becoming the villain. When things finally converge for the last few episodes it is a pretty thrilling ride indeed.

Production values are another place this series shines. They’ve done a tremendous job of creating an atmosphere that immerses you into this particular corner of the DC universe. The city is often rainy, and most of the action happens in the night. There’s a gritty underbelly to this place that’s mostly found in the city’s poor area known as The Glades. It’s this economically-challenged location where Oliver puts his lair beneath his sister’s nightclub. The action is filmed almost in a documentary style. All of this lives in a stark contrast to the glitzy world many of our characters live in during the daylight.

Each episode is presented in its original aspect ratio of 1.78:1. The 1080p image is arrived at with an AVC MPEG-4 codec. Black levels are absolutely vital in this high-definition image presentation. So much of the action happens on rainy nights and in the shadows. Fortunately there’s solid shadow definition here, or this could well be a bloody mess to try and make out. When colors need to stand out, they do. Keep in mind it’s not really as colorful or bright a show as Smallville was. Look more for contrast and textures to replace shiny surfaces.

The Man Beneath The Suit – The Atom’s First Flight: (7:17) This feature examines the relationship between The Atom and the suit.

Nanda Parbat – Constructing The Villain’s Lair: (22:48) The world of Ra’s is pretty much an astounding bit of practical sets and computer work. This feature gives us a nice look at how it all comes together.

The comics industry in films and television has been having somewhat of a modern-day renaissance in recent years. The Dark Knight Trilogy and Smallville have been huge hits for DC, and Marvel is basically printing their own money with The Avengers and each hero’s own franchise. Smallville is gone, and DC is not about to surrender that niche to Marvel, who has their Agents of S.H.I.E.L.D. arriving soon. Enter Arrow and another origin story of a young hero before he became the icon that appeared in the world of comic books. With some recent failures and plenty of unkind speculation about the upcoming DC team-up film, it is the DC television universe which has done an incredible job. Arrow is going quite strong getting better every year. With so many good shows being produced, it’s getting harder for this reviewer to keep up. “It just means I have to try a little bit harder.”

Gino Sassani is a member of the Southeastern Film Critic's Association (SEFCA). He is a film and television critic based in Tampa, Florida. He's also the Senior Editor here at Upcomingdiscs. Gino started reviewing films in the early 1990's as a segment of his local television show Focus. He's an award-winning recording artist for Omega Records. Gino is currently working on his 8th album Merchants & Mercenaries. Gino took over Upcomingdiscs Dec 1, 2008. He works out of a home theater he calls The Reel World. Favorite films: The Godfather, The Godfather Part II, The Body Snatcher (Val Lewton film with Karloff and Lugosi, not the pod people film), Unforgiven, Gladiator, The Lion King, Jaws, Son Of Frankenstein, The Good, The Bad And The Ugly, and Monsters, Inc.
The Nanny: Season 4 The Red Road: The Complete Second Season