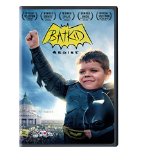 At one point or another, every kid dreams of being a superhero. For me, those flights of fancy took place at age 6 or 7, when I’d put on my Batman pajamas — the ones with the detachable velcro cape — and leap off the staircase inside our home. (When I really wanted to give my mom agita, I’d jump off the third step from the bottom.) Miles Scott — a California boy whose evil nemesis is leukemia — got to live out his superhero fantasy on the grandest scale at age 5. Batkid Begins isn’t a great documentary by any means, but it’s a cheerful, good-hearted (if saccharine) look at the making of a dream.

The film quickly introduces us to Miles and the rest of his photogenic family. The boy was diagnosed with lymphoblastic leukemia at 18 months old, and the movie chronicles his battle with the disease, which included chemotherapy sessions for several years. One of the things that kept Miles upbeat throughout this ordeal was his unabashed love for superheros. He was particularly fond of Batman because of his ability to do extraordinary things without superpowers. So when his family found out that Miles was eligible to have a request granted by the Make-A-Wish Foundation upon completion of his chemo treatments, the boy immediately knew what to ask for.

“I wish to be the real Batman.”

The Caped Crusader — and the little boy who plays him here — might get all the headlines, but according to Batkid Begins, the real superheroes are the people who hustled to make this one dream come true. That includes Patricia Wilson, head of the San Francisco Make-A-Wish chapter, and the rest of her staff. There’s also Eric “E.J.” Johnston, the ingenious stuntman/inventor who used his technical savvy and connections to play (Adult) Batman and create an immersive experience for Miles.

And what an experience it turned out to be! The documentary largely sidelines Miles and his family as it chronicles the ridiculously elaborate preparations to (temporarily) turn San Francisco into Gotham City. It is briefly mentioned that the “superhero experience” isn’t exactly a unique request from “Make-A-Wish” kids. But the film doesn’t really explore why Miles’ wish was set to be fulfilled on such an enormous level. Even before Mike Jutan (the software engineer slated to play the Penguin) posted about the event on social media and it went viral, “Batkid Day” had already secured the participation of San Francisco Mayor Ed Lee and police chief Greg Suhr for a multi-destination adventure that featured a damsel in distress (Sue Graham Johnston) and a Lamborghini-turned-Batmobile.

Batkid Begins is directed by Dana Nachman with minimal stylistic flourishes (a promising early gimmick that used comic book panels to tell Miles’ backstory isn’t used nearly enough) and zero traces of cynicism and irony. As “Batkid Day” continues to garner worldwide attention — we learn the previous biggest Make-A-Wish superhero experience attracted 200-250 volunteers; this one was set to be attended by 15,000 people — the movie chalks all the interest up to good-hearted people wanting to make a little boy’s dream come true. But as the flash mobs and sign-wielding loonies — who have little chance of actually glimpsing or interacting with Miles on his big day — descend on San Francisco, the whole spectacle takes on an absurdist, self-congratulatory tone that the movie all but ignores. Nachman and her film keep a straight face as Miles’ story — most definitely a triumph of the human spirit — morphs into becoming a triumph of Twitter. (Former twitter exec Mike De Jesus’s live-tweeting of the event is credited with giving the event a major boost.)

The documentary works best as a behind-the-scenes peek at the madness of “Batkid Day”, which took place Nov. 15, 2013. That includes a few minor mix-ups, like Batman being a little tardy to meet up with Miles at his family’s hotel room and Johnston’s nifty forearm projector threatening to crap out shortly before the event. (There’s also an amusing moment where the projector starts playing the wrong pre-taped message from Police Chief Suhr.) Again, Batkid Begins almost completely glosses over several moments where it really seems like the adults are getting more out of this thing than the little boy they’re supposed to be helping.

The most egregious example comes during a lunchtime intermission where an exhausted Miles seems ready to call it quits before Johnston gently manipulates coaxes him into continuing on the pre-planned adventure. (Props to Nachman for showing us this genuine moment, by the way.)

It’s no major spoiler to say that Miles ultimately finishes his adventure. The movie turns his final ascent up a flight of stairs at AT&T Park into a symbolic hero moment about an ordinary kid overcoming adversity. (Composer Hans Zimmer, who scored Christopher Nolan’s Batman movies, appears in the documentary; we also see a Twitter shout out from President Obama on “Batkid Day.”) But I couldn’t help thinking that the poor kid just needed a nap.

But even if you’re baffled as to why this particular ailing kid is worthy of all this attention — and there’s apparently more attention to come — it’s hard to knock this movie too much. (Towards the end, we learn the ordeal led to the creation of the Batkid fund to help other sick children.) The documentary has its glaring blind spots, but it’s a fun, family-friendly bit of wish fulfillment.