Posted in: Disc Reviews by Gino Sassani on October 8th, 2015 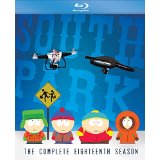 “Listen, my friend. This is going to be very hard to comprehend, but none of what you are seeing is real.”

Of course it’s not real. It’s not really that hard to comprehend at all. This is an animated show, after all. And the figures look like cut-out pieces of construction paper. Of course, we’re talking about South Park. What is hard to comprehend, however, is that we’re talking about the 18th season of South Park. Few television shows last this long, and only The Simpsons has been around longer when it comes to scripted animated shows running today. That’s rare air, indeed.

I’ve been a fan of South Park ever since a friend introduced me to the internet Christmas card that started it all. It was Santa versus Jesus, and these short, potty-mouthed kids that somehow wormed their way under your skin. Pretty soon I was downloading the episodes and watching them on my computer. For some reason I can’t quite explain, I’ve very rarely watched an episode on Comedy Central. By the time things were getting tighter and riskier downloading the shorts, the single disc, 4-episode DVDs began to arrive in stores. So my South Park viewing moved from the PC to the DVD player. In a short time season sets began to arrive, and I looked forward to them with much anticipation, still watching it infrequently on television. After all, who needs the commercials and those silly network bugs that distract you on the screen? The series itself evolved in that time. The show was once achieved through a stop-motion process using construction paper cutouts. The animation was crude. After the Christmas card, the characters were significantly redesigned. They had a very evil look on that short. The first couple of episodes brought us an evolution toward the characters we know and love today. After a while the animation went to a computer process. The look remained the same, but gone were the paper cuts and stop-motion photography. As the show progressed, there were less and less bleeps. It’s not that the language got any tamer. Standards got a little looser. Finally the bleeps would disappear from at least the DVD releases. And in recent years the show has made the jump to high definition, and the world of South Park got a little brighter and sharper.

You have to credit the expanding universe of good characters. The core group of Cartman, Stan, Kyle, and Kenny were great for a lot of years. But we also have such great semi-regulars as Timmy, Jimmy, and Butters. These characters allow the stories to expand in ways the core group could not.

So what about the episodes themselves? Let’s play a little game called The Good, the Bad, and the Ugly, shall we?

The Cissy: One of the worst liberal ideas I’ve ever heard of comes from a California school district where they decide that kids can use whatever bathroom they “identify” with.  When I was a kid it would mean every guy in school “identifying” with the girl’s room. Here Cartman is just tired of not getting a stall at recess in the boys’ room. He puts a pink bow in his hair and starts using the girls’ room. Of course, it all gets out of control, and in the end Cartman doesn’t get what he wants. They resisted some easy temptations to just get gross. Instead they actually thought about funny.

HandiCar: The new aps that allow you to get rides cheaper than cabs is catching on. They were even the subject of a recent CSI:Cyber episode. Here Timmy wants to raise enough money to send everyone back to camp, so he begins selling rides with his wheelchair pulling a wagon. It catches on and gets the ire of cab drivers, the auto sales industry, and Nathan, who doesn’t want to go to camp. So he uses the other haters to try to bring Timmy down. It all leads to a revival of that Hanna-Barbara cartoon classic The Wacky Races. This one is another golden effort.

Freemium Isn’t Free: The Canadian government launches a freemium app that is like many addictive games today. It starts free, but before long it hooks you into paying to keep going. The episode treats it like a drug, with Jimmy as the app pusher. When Terrance and Philip find out they’re being used for the game, they have some doubts. It all leads to an epic battle between Satan and Canadian Satan. Another example of not yielding to temptation.

Grounded Vindaloop: This one ranks up there as one of my favorite episodes ever. It starts with Cartman tricking Butters into thinking he’s actually in a virtual reality game. But who is actually in the game? There are a series of crazy loops here that lead to the funniest stuff in a long time. Throw in a riff at Indian customer service centers, and this is comedy gold.

The Magic Bush: Drone craziness has hit South Park when Butters, Kenney and Cartman use Butters’ Dad’s drone to catch a neighbor in the nude. No one wants to admit they did it, and the video finds its way on the internet. Cartman makes it worse each time he tries to cover his involvement, and the episode turns into a drone free-for-all. Nice idea, pretty stupid execution.

#Rehash / # Happy Holograms: These last two episode prove a season finale two-part story. Basically, they rehash all of the stories from this season, and with holograms of celebrities, find a way to keep making fun of dead folks like Michael Jackson. This is what happens when a show staff runs out of ideas before the season ends. There’s too much going on, and everything gets lost. It’s as crowded as the opening sequence has gotten.

Go Fund Yourself: The ideas here are clever enough. The boys are sick of school and decide to start their own Kickstarter business. They decide that their business model will be FU: We won’t do anything for you.” They use the Washington Redskins as their name because of the recent trademark protection fight over the nickname. It ends up being a pretty solid riff on Kickstarter and the NFL and pointing out how silly the whole nickname fight really is. It gets into the Ugly heading because of the rather over-the-top graphic additions made to the Redskins logo. It’s the kind of thing that was likely hilarious at the office, but not on the episode. It’s a great example of Stone & Parker wanting us to know just how funny they are… yeah… if I’m like five years old.

Gluten Free Ebola: This one has potential. We all are tired of the government or other groups finding out things are bad for us one day and something else later. Meanwhile the bad stuff turns out it was OK, and the good stuff ends up killing you. They poke great fun at the gluten-free movement. It all ends up messing with the boys trying to throw “The Best Party Ever” because everyone hates them because they left to start their business with a slew of insults. This makes that different how? Anyway… it’s ugly because of the side-effect of the gluten discovery.

Cock Magic: This one provides a clever version of cock fighting. Instead of actual bloodshed, the animals play Magic Gathering using the various spell and enchantment cards. Kenny isn’t happy, because people used to gather and watch him play. It’s an average episode that finds itself here because of Randy’s version of the title game.

Stone and Parker are back with their “commentary minis”.

Episodes like Grounded Vinaloop and Freemium Isn’t Free are great examples that the guys still have it. They’ve gotten really lazy in recent years. Some say the show has just run its course, and they boys don’t have it anymore. Success has made them more than a little complacent, and it’s episodes like these that prove they could still put out an incredible series if they just got off their butts and put in the work. This is your wake-up call, guys. Let’s stop relying on sixth-grade humor or pushing the visual crap envelope. Put in the work, and make us laugh. Understand? Good. “Have I answered your questions and provided good customer service?”

Gino Sassani is a member of the Southeastern Film Critic's Association (SEFCA). He is a film and television critic based in Tampa, Florida. He's also the Senior Editor here at Upcomingdiscs. Gino started reviewing films in the early 1990's as a segment of his local television show Focus. He's an award-winning recording artist for Omega Records. Gino is currently working on his 8th album Merchants & Mercenaries. Gino took over Upcomingdiscs Dec 1, 2008. He works out of a home theater he calls The Reel World. Favorite films: The Godfather, The Godfather Part II, The Body Snatcher (Val Lewton film with Karloff and Lugosi, not the pod people film), Unforgiven, Gladiator, The Lion King, Jaws, Son Of Frankenstein, The Good, The Bad And The Ugly, and Monsters, Inc.
Batkid Begins “31 Nights of Terror” Poltergeist (2015) (Blu-ray)