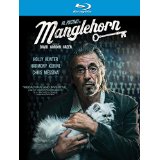 The last decade hasn’t been too kind to Al Pacino. The man is only one of our greatest living actors, but he’s mostly been stuck appearing in forgettable tripe (88 Minutes) or out-and-out atrocities (Jack and Jill) for the last 10 years. So it’s easy to overlook the fact that Pacino is quietly doing really good work again. I say “quietly” because the actor has recently eschewed the “hoo-ah!” tics that turned him into a caricature. This affecting, engaged, and more subdued version of Pacino can be seen in Danny Collins, and he is also front-and-center in Manglehorn, a whimsical, uneven drama that is grounded by its star’s strong work.

Pacino plays A.J. Manglehorn, a shabby, solitary locksmith whose biggest personal connection is with his beloved cat Fanny. As we watch Manglehorn shuffle through each day — which includes hopping in his rickety van to help clients who have locked themselves out of various places — his life starts to come into focus.

It immediately becomes clear that Manglehorn has never recovered from losing the love of his life, a woman named Clara. (Although we’re not quite sure how he lost her…and what her being “lost” even means.) Manglehorn is estranged from his son Jacob (Chris Messina), a wounded, condescending and successful commodities trader. He seems to have more of a rapport with Gary (Harmony Korine), the loudmouth tanning salon/“massage parlor” owner who has idolized Manglehorn since he was a boy (and the older man was his Little League coach). The only person Manglehorn seems halfway interested in connecting with is Dawn (Holly Hunter), the impossibly chipper bank teller he sees every Friday.

Manglehorn is directed by David Gordon Green, who’s had a very interesting career arc. He started off making quiet, no-frills dramas (All the Real Girls, Undertow, Snow Angels) before turning to a string of profane, commercial comedies (Pineapple Express, Your Highness, The Sitter). Like his Manglehorn star, Green has currently retreated into more introspective work. Prince Avalanche was a meandering, picturesque slice of life, while Joe was a powerful character study starring another actor who vacillates wildly between genius and trash. With Joe, Green was able to bring out Nicolas Cage’s most focused, invested work in years. He pulls a similar feat here with Pacino, who is consistently riveting even as Manglehorn leaves you scratching you head.

The script is by first-time feature writer Paul Logan, and it does a decent job of parsing out pieces of the title character’s past. However, the film also incorporates a few curious choices — a surreal car wreck involving multiple vehicles and busted watermelons; an inexplicably extended look at cat surgery — that sometimes clash with the down-home character drama that serves as the film’s basis. Some of the stylistic touches are effective, like the intentional, dreamlike scramble of sight and sound to convey Manglehorn’s foggy state of mind. However, other flourishes felt forced; the recurring mime, for example, only seemed to be a part of the story so he could set up the movie’s final, polarizing scene.

There’s also the notion that a lot of these add-ons are here to help mask what is a pretty thin script/story. I’m ok with bypassing a complicated plot — and even with chucking a plot altogether — but I wish the leftover screen time had been used to develop some of the supporting players. Hunter delivers beaming, mature work here; I think she’s the first Manic Pixie Dream *Woman* I’ve ever seen. However, she’s so effortlessly genial that you’ll start to wonder things like, “Why is this woman still single?” and “What the heck does she want with a coot like Manglehorn anyway?” Messina has less than a handful of scenes — including a forced monologue — to convey Jacob’s strained relationship with his dad. But the conflict between father and son always feels mostly abstract.

Of course, given that the movie is called Manglehorn, maybe I shouldn’t be surprised that it skimps on its supporting players. Pacino is terrific here in a way we’re not used to seeing. Whereas we’ve become conditioned to Pacino yelling at us, Manglehorn is more passive aggressive about his anger and resentment. The actor carries the title character’s heartbreak and regret in his hangdog eyes and hunched walk. Manglehorn isn’t a one-dimensional crank either; he dotes on his adorable granddaughter and is generally cordial to people, despite the fact that he appears to have no use for them on a personal level.

Manglehorn is presented in an aspect ratio of 2.40:1. The 1080p image is arrived at with an AVC MPEG-4 codec at an average of 25 mbps. The baseline palette is (appropriately) gloomy and slightly drained of color. The image also boasts a digital sheen resulting in black levels that aren’t quite as inky as you might see in other HD presentations. The good news is fine detail is fantastic, especially during close-ups that let you see very crease on Pacino’s face. This is also a versatile visual presentation, as we get bright, high-contrast scenes (Manglehorn visiting Jacob in his airy office) along with bursts of neon. The occasionally soft image also helps enhance the story’s dreamlike qualities.

The DTS-HD Master Audio 5.1 track is most notable for pumping up the evocative, full-bodied score by Explosions in the Sky. The film cycles through some unexpected musical selections (electronic and hip-hop tracks accompany the melancholy score), with the hip-hop track providing the brief bit of work for the subs. Immersion is largely restrained, but still effective. As I mentioned earlier, Green intentionally allows sights and sounds to bleed into each other during this movie. This includes laying Manglehorn’s gravelly voice over narration over dialogue that is occurring on-screen at the same time. Despite this track’s best efforts, it’s not always easy to separate the two.

Don’t get me wrong. I enjoy Maniacal Pacino as much as the next guy. But it’s reassuring to see the actor can still deliver a moving performance without resorting to hysterics.

While the star’s work might be pleasantly stripped down, I wish there’d been more to the rest of the movie. Manglehorn has a few captivating touches, but spends a little too much time doodling on the margins.