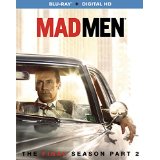 “This is the beginning of something, not the end.”

There weren’t any Lost-style mysteries to be resolved here. And unlike The Sopranos or Breaking Bad, this particular series never really hinged on whether the lead character lived or died. (Although a moment in Ep. 5/“Lost Horizon” seems to nod toward fan speculation that Don Draper would take a tumble similar to the silhouette from the show’s iconic opening credits.) Instead, the final season of Mad Men — more than any other all-time great show I can remember — is directly about the end of things.

More specifically, the final seven episodes of Mad Men explore the various responses people express when they’re faced with finality. Those reactions include denial and (especially) regret over a life not lived. The action picks up in April 1970 and the season carries us through the fall of that same year, concluding the show’s implicit promise to keep its story confined to the 1960s. (The series premiere was set in March 1960.) It’s a minor kick to see how the look of the characters has evolved since the show’s premiere; colors are brighter, and men’s haircuts are shaggier. I promise we’ll get to Roger Sterling’s mustache in a bit.

“I want to burn this place down.”

The staff at Sterling Cooper Draper Pryce & Partners is reaping the benefits of its latest agency-saving Hail Mary. Roger Sterling (John Slattery) brokered a deal to sell the majority of the agency to (real-life advertising behemoth) McCann Erickson, which allowed SC&P to operate as an independent subsidiary. Don Draper (Jon Hamm) is all but divorced (again) and back to his womanizing ways (again!). Meanwhile, Peggy (Elisabeth Moss) is still struggling to marry her professional ambitions with functional personal relationships — which is why her easiest relationship is with “work husband” Stan (Jay R. Ferguson) — while Joan (Christina Hendricks) is consistently undercut by oafish male associates who can’t get past her bombshell looks. (Hendricks magnificently gets to grit her teeth through a particularly humiliating meeting in the season premiere/“Severance.”)

“I want to have my performance reviewed. I’ve had quite a year.”

Those last few story beats I mentioned are exceedingly familiar to anyone who ever watched Mad Men for an extended period of time. It’s tempting to rail against their redundant nature and chalk it up to the show having nothing new left to say after seven seasons. But creator Matthew Weiner has turned the cyclical nature of life into high art. The season premiere re-deploys two Weiner staples: Don’s infatuation with Damaged Dark-Haired Women (this latest one is a waitress played by Elizabeth Reaser, and the character is easily the most tedious part of the show’s swan song) and dream sequences (Weiner co-wrote “The Test Dream” episode of The Sopranos with David Chase). However, “Severance” also features a tragicomic subplot in which Ken Cosgrove (Aaron Staton) — who literally gave his right eye for the sake of the agency — has a chance to start his life anew…but can’t quite pull the trigger.

But even with their “the more things change, the more they stay the same” vibe, these last episodes still definitively feel like the end. Beloved characters pop by for final appearances — hello Rachel Menken, Bert Cooper, and Lou Avery (ok, fine…Lou’s clueless brand of dickish-ness was only beloved by me) — while others stayed on the sidelines (sorry, Sal Romano fans). There are also some effective send-offs, even for some of the show’s more maligned characters. While Don’s most recent ex-wife Megan (Jessica Pare) is gone by the end of Ep. 2/“New Business”, it’s his first wife Betty (January Jones) who gets a the most powerful and affecting departure. Betty’s always been a hard character to embrace — her people are Nordic — and some of that distaste spilled over onto Jones and her performance. Simply put, the actress is awesome in the relatively limited screen time she gets in these episodes. Jones says more with a pained reaction shot than actors on other shows say with multi-page monologues.

“You don’t have character…you’re just handsome.”

Speaking of people who are awesome on this show, Hamm finally won his long overdue Emmy for playing Don Draper. I can’t say his work in these episodes was the best or showiest he’s ever done. In fact, Weiner masterfully subverts our expectations in Ep. 4/“Time & Life”; just when Hamm stands up in a boardroom to deliver a classic, Emmy-bait “Don Draper speech”, he is gently silenced before he can even get going. Hamm’s performance in the final couple of episodes — as Don reckons with the “wasted life” he snatched from a dead man — is exemplary. We also get reliably excellent work from Vincent Kartheiser as ascending accounts man Pete Campbell and Moss as Peggy. Each of them gets a surprisingly happy/romantic ending. (And Peggy actually gets a badass entrance at the end of “Lost Horizon.”) However, the season’s overriding theme makes us wonder how long their “happily ever after” will last.

Finally, one of the underrated pleasures of Mad Men is how consistently hilarious the show was. I counted at least two classic Pete Campbell hissy fits (“The king ordered it!” is fun to yell out at random times), while Slattery’s Sterling delivers more chuckles-per-line than almost any non-sitcom character I can remember. Even if he didn’t have his transcendent mustache for these final few episodes, a character’s departing words to Roger still would’ve rung true: “you’re very amusing.” Heck, even a bit player like Don’s sweet, dumdum secretary Meredith (Stephanie Drake) is so dim, Don seemingly can’t muster the libido to bed her.

Despite the odd number of episodes in this set — the 14-episode final season of Mad Men was split into two halves that aired about a year apart — The Final Season — Part 2 feels impressively self-contained, cohesive, and (most importantly) satisfying.

Mad Men: The Final Season — Part 2 is presented in its original aspect ratio of 1.78:1. The 1080p image is arrived at with an AVC MPEG-4 codec at an average of 33 mbps. One of the pleasures of Mad Men is the attention to detail (in props, set design, etc.) paid to this particular time period. This terrific Blu-ray from Lionsgate offers the fine detail required to appreciate the work that goes into the show. The detail is there in both close-ups and the more cinematic wide shots. Color and contrast are also spot-on; wardrobe and sets got gradually brighter as the more radical late ‘60s/early ‘70s crept closer, but the palette returns to its more subdued roots during scenes set at the McCann Erickson office. And since Don spends a good chunk of the finale in his beloved California, we get some sunny exteriors thrown in for good measure. Black levels are deep and rich. My only real complaint is the bit of softness that cropped up occasionally; there’s a quick cut at the end of “Time & Life” when this is most apparent. Otherwise, this is close to as good as it gets on the small screen.

The DTS-HD Master Audio 5.1 track reveals that the sound design has been just as carefully curated as the look of the show. There is fantastic separation on display during any scene at SC&P. I expected to hear the clatter of typewriters across the rear channels to offer maximum immersion, but instead that noise is largely confined to the front speakers to make way for other ambient office noises, adding an extra layer to the show’s sound field. The first episode prominently features Peggy Lee’s “Is That All There Is?” which reveals a buttery bottom end that otherwise doesn’t rear its head very often. Same goes for the bit of directionality from the front speakers to the rears while Don is zooming around the salt flats in Utah.

Audio Commentaries: Every episode comes with a corresponding track that includes Weiner along with various Mad Men writers/producers like Scott Hornbacher, Semi Challas, Erin Levy, and more. Costume designer Janie Bryant pops by for the premiere, while Hamm joins Weiner for the series finale. Each of these tracks is excellent and worth a listen simply for Weiner’s encyclopedic knowledge of the time period. The commentary for “Severance” also addresses the challenge of making a “mid-season premiere” feel like a proper beginning.

(The following Special Features can be found on Disc 1.)

Generation Boom — Baby Boomers: (25:47) An interesting featurette that examines the conflicts and contradictions within baby boomers, people born between 1946-64. (When fertility rates in the U.S. were consistently elevated.) There’s some great archival footage here to go along with commentary from people like author Michael Gross, who talks about how boomers clashed with the preceding, World War II generation while battling their own selfish/self-less urges.

Earth Day 1970: (2:42) The first Earth Day took place in 1970, and this is essentially a slideshow of newspaper clips/archival photos.

(The following Special Features can be found on Disc 2.)

Unmarried Professional Woman: (29:43) Another intriguing featurette; this one zeroes in on the Peggy and Joan characters, relating their plight to real-life women in the advertising field at the time (not that there were many) and comparing them to fictional contemporaries. (The Mary Tyler Moore Show premiered in 1970.) Features clips from Mad Men’s entire run, and I enjoyed the trip down memory lane to chart Peggy and Joan’s evolutions.

Laurel Canyon: (2:43) A look at the Los Angeles neighborhood that housed the likes of Joni Mitchell, The Mamas and the Papas, and more. Only tangentially related to Mad Men.

Advertising Timeline: (0:47) An interactive feature that offers a timeline of notable events for several real-life ad agencies in the 1960s (including McCann Erickson) along with some examples of their work.

Mad Men: The Final Season — Part 2 features all seven episodes on two discs. The series finale/“Person to Person” ironically features key characters having their final interactions of the show via telephone and concludes with a deceptively simple image that was (of course) wildly overthought and blown out of proportion by the Internet. Then again, the appeal of Mad Men — at its heart a workplace dramedy that happened to tackle existential issues most shows wouldn’t touch — was also deceptively simple.

Someone once bitterly accused Don Draper of only liking “the beginning of things.” Thanks to this strong batch of episodes befitting the Hall of Fame-run that preceded it, I can comfortably say I thoroughly enjoyed the end of Mad Men.

There is also a complete series Blu-ray release avail.