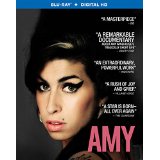 Amy Winehouse — the troubled English soul singer who died of alcohol poisoning at age 27 — says these sadly prophetic words early on in Amy. Hearing them almost five years after her 2011 death only adds to the powerfully haunting quality of this documentary. At its core, Amy is like every Behind the Music episode you’ve ever seen…except it is also a masterfully told story with thrillingly original flourishes.

“She needed music as if it was a person…and she would die for it.”

Amy begins in 1998, with home video footage of a teenage Winehouse goofing around and serenading one of her friends with a jazzy rendition of “Happy Birthday.” The scene turns out to be emblematic of this mesmerizing documentary and the points that it wants to make about Winehouse. Beyond offering a sample of the singer’s prodigious vocal talents, the opening shows that Winehouse was at her happiest and most comfortable (at least on camera) when she was performing for a small group of trusted friends. The cold open is also the first glimpse at the amazing quality (and quantity) of intimate footage director Asif Kapadia and his team were able to unearth to craft their story.

From there, the film follows a pretty conventional “rock star” arc. We follow Winehouse as she records and releases her jazzy debut album (2003’s “Frank”) and some simmering personal demons start to take hold. Winehouse is shown to have always been a recreational drug user, but those issues are magnified when she starts living on her own in Camden — a bohemian borough in London — and connects with Blake Fielder-Civil, the on-again/off-again boyfriend and eventual husband who introduced her to crack cocaine. Even as her personal issues begin to mount, Winehouse pushes through and records her second (and final) album: 2006’s blockbuster “Back to Black”, which granted her widespread acclaim and worldwide fame. Unfortunately, we know those things weren’t enough to help Winehouse vanquish her demons.

Kapadia previously directed 2010’s Senna, the phenomenal documentary about Formula One champion Ayron Senna and one of my favorite movies from the last five years. Just as he did with Senna, Kapadia doesn’t use any talking head interviews from the people who were close to the “star” of his film. Instead, the storytelling burden here is largely carried by Winehouse herself, through the use of a staggering collection of recorded material that is presented in interesting ways. (The film nicely cuts together three different late-night TV performances of “Rehab” during Winehouse’s American takeover.) In addition to recording session and live performance footage, we get video clips of a pre-superstardom Winehouse — which also means pre-beehive and signature thick eyeliner — lounging around her London flat or going on a car trip with a group of friends. Some of the people in Winehouse’s life — most notably, manager Nick Shymansky, childhood friends Lauren Gilbert and Juliette Ashby, and even Blake Fielder-Civil himself — contribute their thoughts through voiceover.

I wouldn’t say I was a Winehouse obsessive, but I definitely admired her unique vocal instrument. And like a lot of people, I found her extended public meltdown alarming, depressing…and fascinating. As a result, I found the earlier parts of Amy to be more compelling because they show the side of Winehouse most people aren’t acquainted with. That being said, the filmmakers manage to explore even the familiar parts of Winehouse’s life and career in refreshing ways. For example, I remember watching Winehouse looking absolutely stunned at winning Record of the Year at the 2008 Grammys, but behind-the-scenes footage in Amy reveals that she was definitely more excited by the fact that presenter Tony Bennett knew who she was. (We later get footage of an intensely insecure Winehouse dueting with her idol.) Amy even shines a new light on Winehouse’s best-known song. I’ve sung along to the part in “Rehab” that goes “I ain’t got the time/And if my daddy think I’m fine” without giving it a second thought. However, the film reveals that Winehouse’s semi-estranged father Mitchell actually helped dissuade Winehouse from checking into rehab so she could get back to work. (You’re not gonna believe this, but Mitchell isn’t a fan of the film.)

Amy not-so-subtly makes the point that getting Winehouse proper help early on — before the paparazzi knew who she was and could track her every move in rehab — might have helped her live a longer life. (Winehouse did seek treatment later in life.) However, the film also notes that we might have never gotten “Back to Black” if that happened. While Fielder-Civil, Mitchell Winehouse, and promoter/manager Raye Cosbert (who had an incentive to keep Winehouse on the road and performing) undeniably come off poorly in the film, the movie’s main target is arguably the star-making music industry and celebrity culture, both of which tend to chew talent up and spit it back out. Again, this isn’t an original thesis, and the filmmakers do bang the point home a little hard. At 128 minutes, Amy is a little flabby, especially in its latter half. (The death of Winehouse’s paternal grandmother is included as a crippling event, despite the fact that this person had never really come up at all beforehand.) However, the movie still has more than enough oomph — including concert footage of Winehouse’s drunken, trainwreck-y performance in Belgrade — to carry the story to its conclusion.

To be fair, some of the onus for Winehouse’s addiction is placed squarely on Winehouse. (A friend notes that the singer was hopelessly bored during a period of sobriety.) Yes, it’s another story about a singer whose greatness was fueled by personal demons. However, Amy still works wonderfully as a captivating chronicle of Winehouse’s life and an appreciation of her talents. (Kapadia frequently uses bright yellow subtitles to highlight Winehouse’s lyrics, which she wrote herself.) Unfortunately, it also grimly depicts all the ways that talent was snuffed out much too soon.

Amy is presented in an aspect ratio of 1.85:1. The 1080p image is arrived at with an AVC MPEG-4 codec at an average of 33 mbps. Like most documentaries, Amy is comprised of a ton of archival footage. Unlike most documentaries, there are no contemporary talking head interviews to serve as a baseline for the presentation’s HD image. As a result, it’s a little tricky to judge the image quality here, which obviously varies wildly. The home video footage and darkened, small club performances are presented in their authentically gritty, grainy glory. However, if you look closer, you’ll see some nice flourishes, like the extra pop of color Winehouse’s subtitle lyrics are granted. Some of the still photographs feature inky black levels and a saturated quality that make them seem as if they’re about to come to life. There are also some clean, panoramic overhead shots of different sections of London mixed in.

The DTS-HD Master Audio 5.1 track is the real showstopper from a technical perspective. The musical interludes featuring Winehouse’s music are granted the same weight and attention to detail that you typically hear from concert Blu-rays. (I was especially impressed by the buttery bottom end for the jazzy earlier tunes.) Dialogue is largely intelligible, and it’s even appropriately muffled when it comes from an inferior recorded source. In fact, the biggest impediment to understanding what’s being said is Winehouse’s thick English accent. In addition to adding dynamic weight to the music, the rear speakers also snap to life during the few segments when Winehouse is being hounded by paparazzi. The incessant camera clicks from the rear speakers will temporarily put you in her disorienting mindset.

Audio Commentary with director Asif Kapadia, editor Chris King, and producer James Gay-Rees: Absolutely worth a listen, if only to hear the filmmakers discuss the process and effort behind gathering all the footage for the film. The trio also alludes to interviews and anecdotes that didn’t make the final cut. We learn the movie’s original opening was the intimate bit with Winehouse talking about feeling like a floating head.

Interviews with Yasiin Bey, Mark Ronson, Salaam Remi, and Jools Holland: (53:52) These are the only talking head interviews to be found on this entire disc. Bey (the rapper/actor best known as Mos Def) is the most emotional participant here, sharing stories about Winehouse and showing some disappointment in Winehouse for not taking better care of herself. Ronson (who produced “Back to Black”), Remi (producer of Winehouse’s debut album “Frank”) and Holland talk about working with Winehouse and do a fine job articulating her unique talent. Rather than presenting the interviews in succession, this feature cuts back and forth between the four men, which kept things a little more interesting.

Deleted Scenes: (33:25) There are 17 chapters here, and they start off with 1993 footage of Winehouse as a little girl with her childhood friends. The rest are mostly comprised of more behind-the-scenes footage of Winehouse, including various recording sessions and interactions with fans. The most amusing bit comes courtesy of a clip of the U.S. State Department explaining its reason for rejecting Winehouse’s visa application, which prevented her from accepting her armload of Grammys in person. Features a Play All option.

The Making of Amy: (1:55) There’s no time to get into anything too substantial here, but Kapadia (a curious fan of Winehouse’s) acknowledges that his film is likely to inspire hurt feelings among those closest to the late singer.

Even though it contains all the trappings of the genre, Amy is one of the best music biopics I’ve seen. Rather than relying on wan re-enactments of key moments from Winehouse’s life, the film is able to construct a powerful and cohesive narrative using the inimitable singer herself.